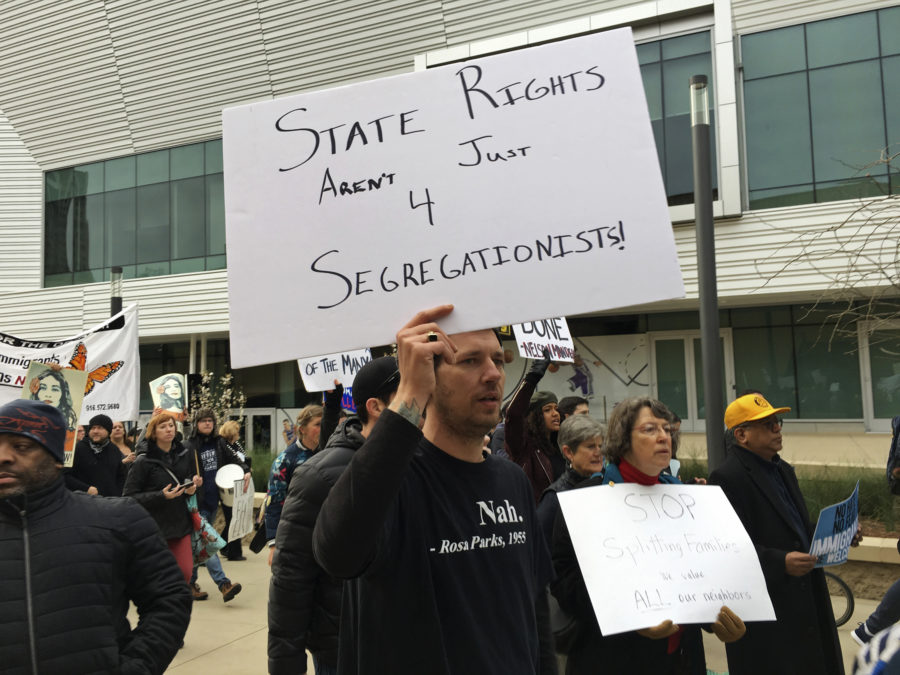 Graduate student Steven Lynn holds up a sign during a protest against U.S. Attorney General Jeff Sessions, who was speaking to the California Peace Officer Association meeting, Wednesday in Sacramento, Calif. Gov. Jerry Brown denounced Sessions for coming to the state to speak about a lawsuit targeting policies that limit cooperation with federal immigration authorities, saying it was unprecedented for him to "act more like Fox News than a law enforcement officer."

Editor’s note: A previous version of this story incorrectly indicated that California honors ICE detainers for certain felonies. Under state law, California prohibits any and all ICE detainers. This story has been updated.

When he addressed law enforcement officers in California this week, Attorney General Jeff Sessions detailed examples to illustrate why the Department of Justice filed suit against California.

“Ventura County declined a request from ICE to hold an alien,” said Sessions, referring to the case of a man accused of child abuse whom federal authorities are now searching for. Sessions claimed that the practice of declining hold requests, also known as ICE detainers, obstructs the ability of federal immigration officials to do their jobs. But the lawsuit the U.S. Department of Justice filed against California fails to challenge the state’s stance on detainer requests issued by U.S. Immigration and Customs Enforcement.

Putting an end to honoring detainers — administrative requests filed by ICE — is a cornerstone of California’s sanctuary law. The routine practice of local law enforcement handing an undocumented person over to immigration officials simply because they were asked to do so has stopped in California.

Even before it was signed into law, SB 54 drew a lot of ire from the Trump administration. After it passed in California’s Legislature, Sessions blasted the bill.

“When federal immigration authorities learn that this criminal alien is in a jurisdiction’s custody our ICE officers issue a detainer request accompanied by a civil arrest warrant and ask the city to either notify them before they release the criminal or to hold the criminal alien long enough to transfer him to federal custody in a safe setting,” Sessions told federal, state and local law enforcement authorities in September.

Brown signed SB 54 into law in October. DOJ had three months to file a preemptive suit to halt the law from going into effect in January but declined to do so.

The state operated under its sanctuary law for more than two months before Sessions announced this week DOJ would sue. But the lawsuit only names three provisions within SB 54: one concerns providing federal immigration authorities with an individual’s release date, another relates to providing personal information including home addresses and a third addresses the transfer of people to immigration authorities.

“It seems like the Department of Justice is conceding on ICE detainers,” said Angela Chan, a policy director for Advancing Justice – Asian Law Caucus, who helped draft SB 54. She said she’s confident the three SB 54 provisions that are challenged in the DOJ suit don’t obstruct the federal government’s ability to enforce its own immigration laws.

Lawsuits against the use of ICE detainers have been successful in courts across the country. In Sacramento, where Sessions addressed law enforcement officers Wednesday, the county sheriff’s department had to pay Martin del Agua $25,000 in 2016 after he was held for three days on an ICE detainer. The case was settled in the Eastern District of California — the same court where DOJ filed its suit against the state this week. Similar cases against ICE detainers have resulted in settlements in other jurisdictions, including in Colorado and Utah.

ICE holds have also been placed on U.S. citizens such as Ricardo Garza, held in a Texas jail for a month until he was able to prove his lawful presence to authorities. In 2016, NPR found that hundreds of U.S. citizens have been subject to ICE holds. The use of ICE detainers by local law enforcement puts those jurisdictions at risk of being sued for violations of the Fourth Amendment, which protects against unlawful imprisonment.

While Sessions continues to take issue with jurisdictions that refuse to honor ICE detainer requests, DOJ fails to address detainers in its lawsuit against California. His office says that could change.

The agency “reviewed and analyzed the various provisions of SB 54 in the context of what were the most meritorious arguments,” a DOJ spokesman states in an email to Reveal from The Center for Investigative Reporting. “This does not preclude the department from moving on other provisions of the laws included in Tuesday’s suit, and the Justice Department continues to review bills that seek to obstruct enforcement of federal immigration laws.”

Chan, who called the lawsuit a publicity stunt, isn’t so sure. “They do not have confidence in the merits of their suit,” she said.

DOJ’s case against California also ignores other important provisions in SB 54, such as barring officers from inquiring about a person’s immigration status, using ICE agents as interpreters and providing ICE agents with office space in jails. Sessions called the lack of office space for ICE officers at jailhouses unconstitutional this week, adding: “It’s a plain violation of federal statute and common sense.” But that provision is not mentioned in the lawsuit.

By Aura Bogado Reveal from The Center for Investigative Reporting March 9, 2018