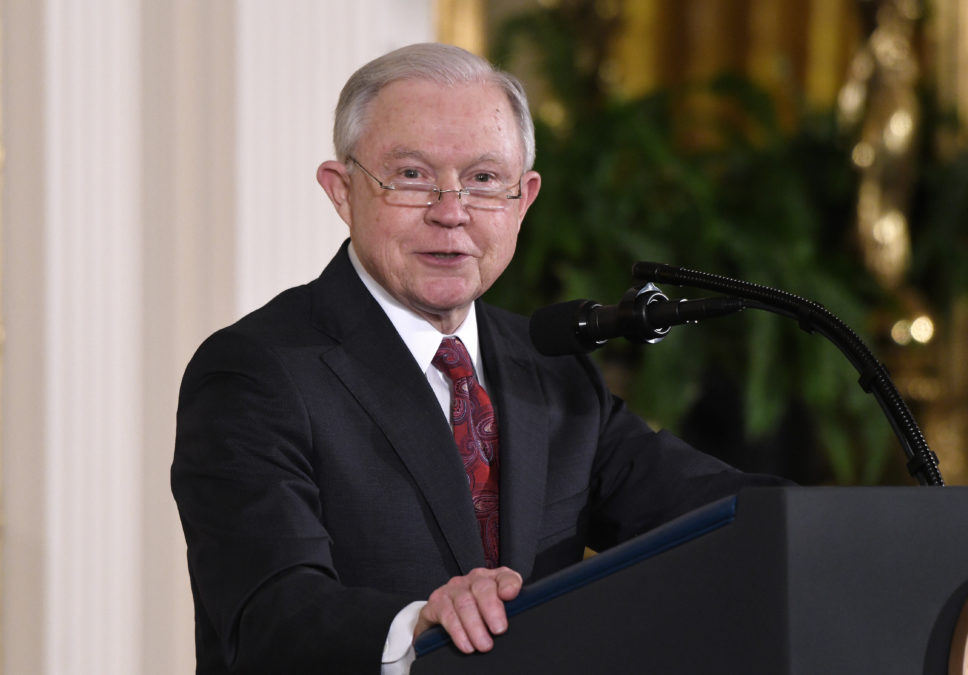 Attorney General Jeff Sessions speaks during a Medal of Valor ceremony in the East Room of the White House Feb. 20.

Employees of the Department of Justice’s Civil Rights Division hold a significantly dimmer view of their senior leadership under the Trump administration than they did under President Barack Obama.

According to surveys obtained by Reveal from The Center for Investigative Reporting through the Freedom of Information Act, employee opinions on the basic decency of their bosses have plummeted since Attorney General Jeff Sessions took over the department.

Federal Employee Viewpoint Surveys are filled out by hundreds of thousands of federal workers every year. In 2017, 280 Civil Rights Division employees completed the surveys.

Positive responses to these questions were significantly lower within the Civil Rights Division than for the Justice Department as a whole.

Gerry Hebert, who spent three decades working in the Civil Rights Division, said there’s often some dissatisfaction among career staffers when White House changes hands between parties. But he said the shifts in the 2017 study were dramatic.

“It might be very frustrating for people, who were motivated by a desire to enforce and uphold civil rights law, to see those laws being undermined by the senior leadership,” Hebert said.

Hebert said that, even when he and his colleagues disagreed with the Reagan administration’s policies, they still respected them as leaders. “We didn’t feel the senior leadership totally lacked integrity or honesty,” he said. “To see the people who are there now expressing their viewpoints in these surveys, I don’t think I’ve witnessed anything this low.”

Created after the passage of the Civil Rights Act of 1957, the Civil Rights Division protects against systematic discrimination based on race, ethnicity, gender, sexual orientation, religion or disability status. Its mandates include the prosecution of hate crimes and protection against voter disenfranchisement.

However, the agency’s current leadership has a long history of working against many of the division’s founding goals.

Attorney General Jeff Sessions lost out on a nomination for a federal judgeship in the 1980s over concerns about his record on race. He prosecuted black activists attempting to register voters in their community and admitted to calling a white attorney a “disgrace to his race.” An African American lawyer who worked under Sessions at the U.S. Attorney’s Office claimed Sessions expressed the desire to “decline” prosecutions of all civil rights cases that crossed his desk.

While the Civil Rights Division hasn’t abdicated all of its responsibilities under President Donald Trump – it’s still prosecuting hate crimes at a notable clip, for example – there have been some significant changes in agency practices. Last year, the Justice Department pulled out of a lawsuit against a Texas voter ID law that the Obama administration – and courts – had found to be discriminatory. A study by researchers at Rice University and the University of Houston found that law had a significant negative effect on the ability of Latinos to vote.

A draft strategic plan for the Justice Department obtained by the Huffington Post last month stated that the agency has de-emphasized its role in enforcing civil rights protections under Sessions.

The employee surveys found an increase in the number of Civil Rights Division staffers who said they were considering leaving their jobs, but the shifts were nowhere near as large as they were with perceptions of senior leadership.

Sharon McGowan, who was the deputy chief of the Civil Rights Division’s Appellate Section, left for a job at the LGBT advocacy organization Lambda Legal two days after Sessions took over.

The Civil Rights Division isn’t the only part of the Justice Department bristling under the Trump administration’s influence. There were similar drops, in the range of about 30 percentage points, for staffers in the Justice Department’s Environment and Natural Resources Division on questions about senior leadership inspiring “high levels of motivation and commitment in the workforce” and maintaining “high standards of honesty and integrity.”

The Environment and Natural Resources Division is responsible for going to court to defend the policies of the Environmental Protection Agency and the Fish and Wildlife Service.

Representatives from the Department of Justice did not respond to multiple requests for comment.

Russ Kick, proprietor of the government transparency site AltGov2, has spent the past few months collecting the results of Federal Employment Viewpoint Surveys. Kick noted that similar drops in enthusiasm for senior leadership weren’t found across the entire Justice Department.

“In the two divisions that handle issues that the Trump administration openly has contempt for,” Kick wrote, “morale has gone off a cliff.”

Correction: A previous version of this story misstated percentages of survey response. For the question, “I have a high level of respect for my organization’s senior leaders,” 72.3 percent of the responses were positive in 2016.  Also in the 2016 survey, 53.2 percent of respondents said senior leaders generated “high levels of motivation and commitment in the workforce.”

By Aaron Sankin Reveal from The Center for Investigative Reporting April 3, 2018