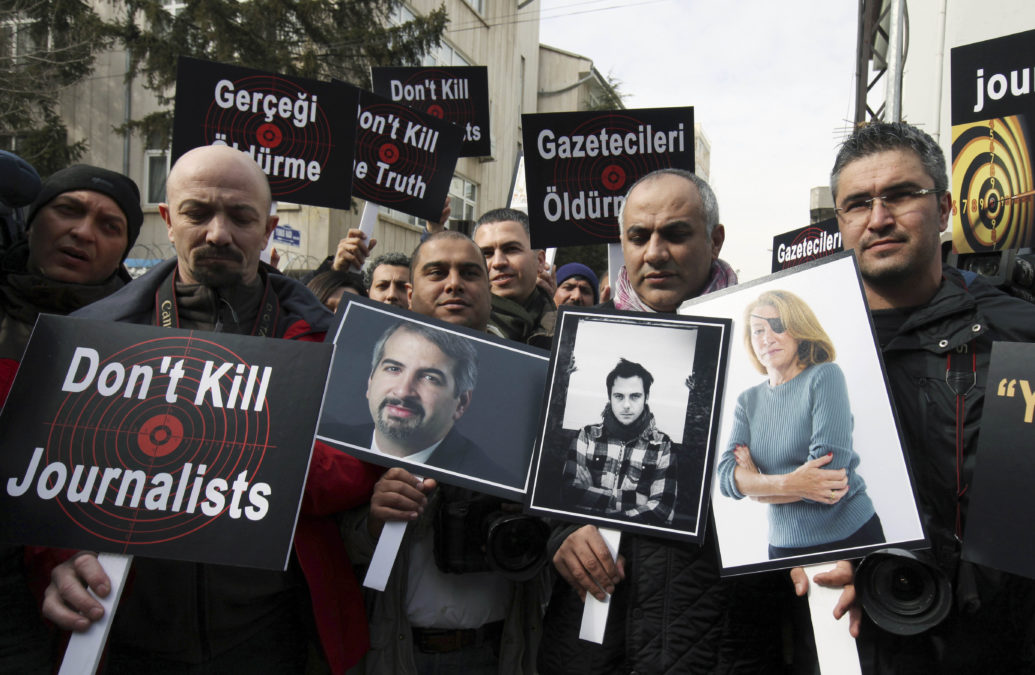 Turkish journalists hold photographs of colleagues who lost their lives in Syria – Anthony Shadid (from left), Remi Ochlik and Marie Colvin – during a 2012 protest outside the Syrian Embassy in Ankara, Turkey.

The FBI is dismantling a special unit that investigates international war crimes and hunts down war criminals – including suspected torturers and perpetrators of genocide, Reveal from The Center for Investigative Reporting has learned.

The unit, which was created a decade ago and has its roots in federal efforts to hunt Nazis living in the United States after World War II, has had a hand in many high-profile prosecutions.

Most recently, its investigators helped take down the Liberian warlord Thomas Woewiju, whom agents found living a quiet life in Philadelphia. At trial, witnesses said Woewiju’s men herded civilians through checkpoints decorated with severed heads and strings of human intestines. He was convicted of perjury in July.

“These are difficult cases to prove because they need rock-solid investigations,” said Beth Van Schaack, a law professor at Stanford University who was deputy ambassador-at-large for war crimes issues in the Obama administration. Scrapping the FBI unit “is inevitably going to jeopardize prosecutions,” she said.

In a statement, the FBI confirmed the shuttering of the war crimes unit but argued its dissolution “in no way reflects a reduced commitment by the FBI” to enforce human rights law. The agents previously dedicated to human rights work will continue that work as members of the FBI’s civil rights program, the agency said.

But the move could run afoul of Congress, which mandated the unit’s establishment and funds its work every year as part of the FBI’s budget. Sources tell Reveal that most of the agents previously dedicated to human rights likely will now be assigned to other jobs and worry that perpetrators of torture and genocide will be free to act with impunity.

In addition to finding international war criminals living in the U.S., the FBI’s human rights unit also has investigated and apprehended perpetrators of war crimes against Americans abroad, along with Americans who commit war crimes themselves – such as military contractors accused of killing civilians in Iraq and Afghanistan or U.S. citizens who fight alongside the Islamic State. All those efforts now could fall through the cracks.

Human rights advocates, who have become increasingly concerned with President Donald Trump’s embrace of ruthless autocrats such as Philippine President Rodrigo Duterte and North Korean leader Kim Jong Un, worry that the move could be political.

“We worry when we see something go from a tweet that is very hostile to a policy that is very hostile,” said Dixon Osburn, executive director of the Center for Justice and Accountability, a legal nonprofit that brings human rights cases in civil court.

One of the center’s recent legal victories highlights the work the FBI unit needs to be doing, Osburn said.

In February 2012, American journalist Marie Colvin was killed in an artillery assault on a media center in Homs, Syria. The center sued, and two weeks ago, U.S. District Court Judge Amy Berman Jackson ruled that “the defendant, the Syrian Arab Republic, engaged in an act of extrajudicial killing of a United States national by planning and executing an attack on the Baba Amr Media Center, and is liable to plaintiffs for the resulting injuries.”

“A targeted murder of an American citizen, whose courageous work was not only important, but vital to our understanding of warzones and of wars generally, is outrageous,” Jackson wrote, “and therefore a punitive damages award that multiples the impact on the responsible state is warranted.”

She ordered the Syrian government to pay the Colvin family’s funeral expenses and more than $300 million in compensatory and punitive damages.

With the civil verdict in hand, Osburn said the government should be aggressively pursuing a criminal case against the Syrian officials responsible for her killing.

“You have the determination that an American was murdered by senior leaders of a foreign government,” he said. “This is the sort of case where the FBI could invest some resources, the sort of case you could lose if you don’t invest in.”

But with the shuttering of the FBI’s human rights unit, that seems less likely, especially with frequent tweets from the president that seem to glorify human rights violations.

“When the Twitterverse starts ruling the budgets, that’s when we get concerned,” Osburn said.

Correction, Feb. 15, 2019: A previous version of this story misspelled the name of the Center for Justice and Accountability’s executive director. It is Dixon Osburn.

Aaron Glantz can be reached at aglantz@revealnews.org. Follow him on Twitter:@Aaron_Glantz.

By Aaron Glantz Reveal from The Center for Investigative Reporting February 15, 2019