For one weekend, early voting was the new brunch 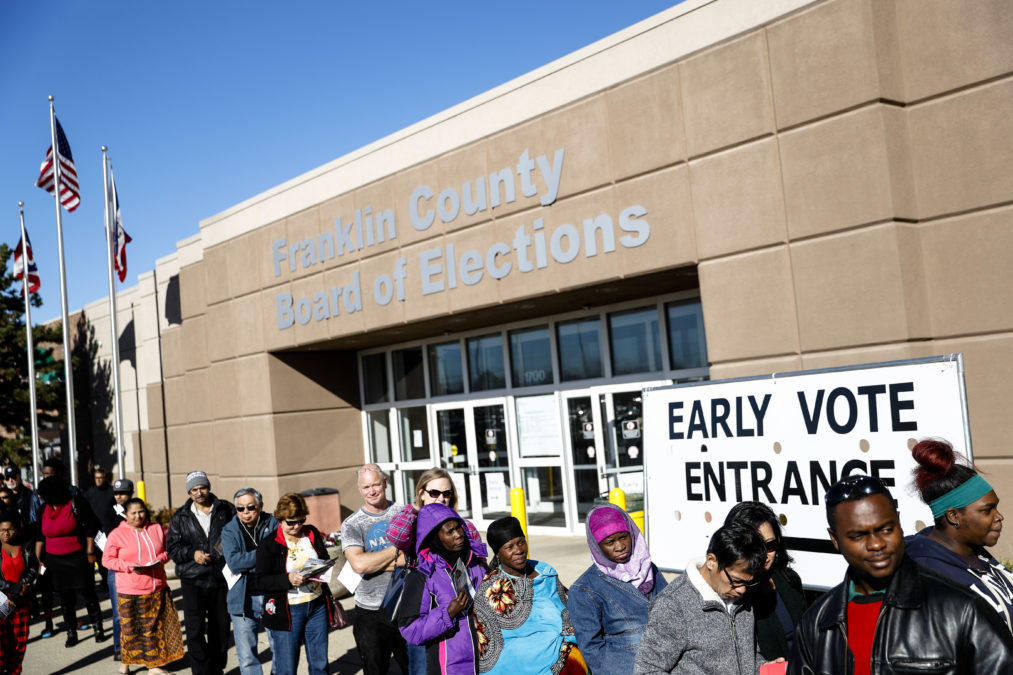 Early voters wait outside the Franklin County Board of Elections Monday in Columbus, Ohio.

Last weekend saw long lines – no, not for poached eggs and bottomless mimosas – but for another American tradition: voting. And early in-person voting at that.

Prior to Election Day, there are various options for rocking the vote early: You can mail in an absentee ballot, vote early online, fax it in or cast a ballot in person at an early voting polling station. Depending on what state you’re in, you may or may not need an excuse why. In the 2012 presidential election, early voting made up 31.6 percent of the vote. So it’s an important chunk of voters.

Early voting is usually touted as the easy and convenient way to cast a ballot. At least that’s what President Barack Obama said in this video he made for the Hillary Clinton campaign. “Why wait until November 8 when you literally you can choose the day and the time that works for your schedule?” he asks.

It seems a number of people agreed with the sentiment.

Folks on Twitter reported long lines at polling places across the country in battleground states, including Nevada, North Carolina and Ohio:

Nevada became a surprise hot topic over the weekend when long lines were reported on the last day, and in the last hours, of early voting for the state. Friday night, KNTV in Las Vegas reported that Clark County broke its record for single-day early voting with more than 57,000 people coming out to cast a ballot.

ABC News reported that those waiting in line at the Cardenas Market, seen above, were mostly Latino and waited about two hours to vote. Poll times were extended by several hours to accommodate the record-breaking crowd. This extension, however, brought the ire of Republican presidential nominee Donald Trump, who claimed that there was a more sinister reason behind it.

“It’s being reported that certain key Democratic polling locations in Clark County were kept open for hours and hours beyond closing time to bus and bring Democratic voters in,” Trump said.

But it turns out, polls stayed open because it’s the law. Nevada’s elections code states that “voting must continue until those voters have voted.” So voters in line before the polls close all get to vote.

*ALMOST* this entire line outside @NCState to vote early just before the 1pm cut off. Everyone in a good mood – pizza is coming. pic.twitter.com/mn8AoJ4NOq

Outcries of voter suppression in North Carolina flooded social media feeds over the weekend. But amid the allegations that Sunday voting was eliminated for discriminatory reasons, droves waited in long lines to vote.

The line you see captured above was at North Carolina State University, where voters waited over two hours, according to journalist Sean Gallitz of CBS News. The early voting cutoff was at 1 p.m. Saturday, and WRAL reported that poll volunteers delivered pizza to the patient crowd.

At 302,382, this election season has surpassed the 2012 presidential election’s record-breaking 260,743 early voter turnout, according to the Wake County Board of Elections.

4,000 people are waiting in line to vote in Cincinnati right now. This is how long the line is. pic.twitter.com/bilpnGsrzl

Saahil Desai mapped the early voting line in Cincinnati on Sunday – a line that looks to stretch more than half a mile (that’s about 1,200 steps for you Fitbit people). And according to him, there were thousands waiting. However, Cincinnati.com’s report was a little more conservative.

Whichever estimate you chose to believe, the line was long. Why? Because there’s only one early voting polling place in Hamilton County – a county with a population of over 800,000 people.

In-person early voter turnout in Hamilton County was a record-breaking 27,004 as of Sunday night. Early voting ended Monday at 2 p.m.

For one weekend, early voting was the new brunch

By Julia B. Chan Reveal from The Center for Investigative Reporting November 7, 2016