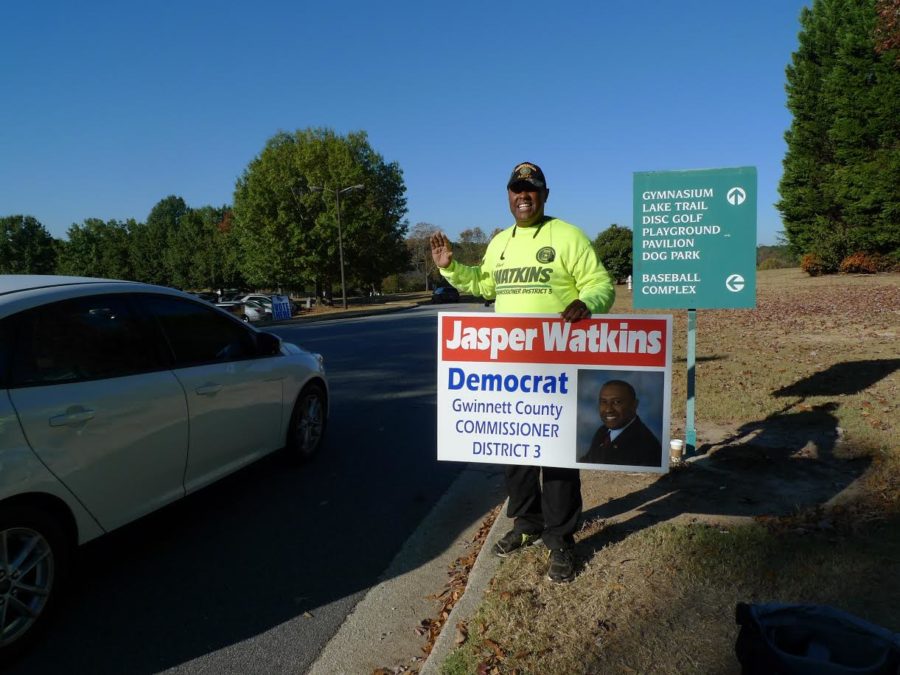 On the last day of early voting in Georgia, Jasper Watkins III makes a final effort to convince voters to choose him for county commissioner in District 3 of Gwinnett County. If he wins, he will be the first person of color elected in a county where white people are a minority.

Jasper Watkins III, a retired nuclear pharmacist and U.S. Army lieutenant colonel, strode into New Jerusalem Baptist church in a dark suit and red tie. He took a seat in the front of the room, at a long folding table decked in red, white and blue tinsel, striped bows and a star-spangled banner.

It was late September and candidates for the county commission had been invited to participate in a forum at the black church, which was captured on video. But only Watkins, 58, and another black Democrat, Jim Shealey, showed up. They sat in a row of empty chairs, reserved for white Republican candidates who never arrived.

“We just looked at each other and said, ‘OK. We will answer,’ ” Watkins recalled.

This is the status quo in Gwinnett County, Georgia, where Watkins hopes to become the first black man elected to the five-member county commission.

In the nearly 200-year history of Gwinnett County, every official elected to countywide office has been white. But whites are no longer the majority in this Atlanta suburb’s population, making up less than 45% of its population and making Gwinnett Georgia’s most diverse county. Gwinnett County also has a long history of racial hatred: the second Ku Klux Klan was founded here in 1915. And Watkins is struggling to overcome low turnout among minority voters, as well as district lines that favor white candidates.

A lawsuit filed in August accuses Gwinnett of violating the federal Voting Rights Act by drawing district lines that undermine minority voting blocs – through a process known as gerrymandering. On the district map, Watkins’ beat is a narrow crescent that stretches more than 30 miles up the eastern edge of the county, dodging small parts of towns along the way.

Non-white voters are spread nearly equally across Gwinnett County’s four districts, so that none have a bloc of black and Latino or Asian voters large enough to ensure an electoral victory. Watkins’ district has the highest share of people of color. To win he’ll need to turn out every voter he can.

On Friday, the last day of early voting, Reveal from The Center for Investigative Reporting caught up with Watkins outside a polling place toward the southern tip of his district. Three seats are up for election, but Democrats are only contesting two: Watkins is running against Tommy Hunter, while Shealey is running against Charlotte Nash for an at-large seat.

Watkins wore a neon green campaign sweatshirt and a “Retired US Army” ball cap. In between questions he smiled and waved and gave a very abbreviated stump speech – “End this traffic gridlock!” – to drivers who rolled down their windows to ask they should vote for him.

Here is some of the conversation, edited for clarity:

Q: So can you tell me where we are and what you’re doing?

A: This is one of the three early polling places here in Gwinnett County. It’s part of my district. It’s District 3. It’s fun. You get the smiles. And I mean, as much as it makes you feel good, you feel the anger, as well, and you feel the frustration.

Q: Tell me about that. When have you felt the anger and frustration?

A: Well, when I was in Dacula last week at another early voting place, they actually called 911 saying that someone was picketing. And they came out to investigate and they found out that it’s just Mr. Watkins. And he’s just campaigning. I guess they thought I would leave because of that. But I’m like, No. I stay. I’m not going to let that type of rhetoric make me move away from what I’m trying to do.

Q: I’ve seen a map of your district. It’s a big district.

A: It is. It is. And the way it’s cut, it’s diluted. It’s a very diluted county, meaning that if there was any chance of a bloc vote, it won’t happen in District 3. Like all Hispanics or all Asians or all African Americans or all white. It’s not going to happen in Gwinnett County; it’s just too diluted. So you pretty much have to do what I’m doing right now. I’m out here, I’m waving, trying to get that vote coming in at the last minute.

Q: Are there particular sectors of people in Gwinnett County who are being more represented than others?

A: Let me put it to you like this: Every last one of those cities (in my district) have no people of color, period, in any of their law-making decisions. From their mayors and police chiefs to city councils. None.

Q: How is that even possible?

A: Because people won’t come out to vote when you go to a building and all you see is one color or one race of person on the wall. So it’s a subliminal type discouragement, saying, “Well, I don’t even know why I’m even trying because I’ve been looking back into the 1800s and no one looks like me on that wall.” So pretty much everybody stays in their little area. Until we can shrink those inequalities that are out there, we’re going to have a problem in Gwinnett County.

Q: It’s interesting that both you and (fellow black candidate Jim Shealey, who moved to Gwinnett County from Akron, Ohio) are people who are not from Georgia originally. (Watkins grew up in a military family and lived in various countries.) Does it almost take an outsider to believe that it’s possible?

A: Well, I would say yes and no. Yes, in that (Georgia natives) know the history of probably 30-40 years ago, when African Americans couldn’t even go to Snellville, or that parts of the KKK was formed in Stone Mountain. See, they have a history of knowing the racial imbalance in Georgia, whereas we don’t. It doesn’t matter to us what happened 30 years ago. What’s happening now and what’s going to happen in the future is what counts. So I guess not having that historical complex on the ground –  yeah, sure, we’ve read it in the history books – but not having lived it, I think is different. You have a different mindset and a different fear factor.

Q: On Tuesday, if you don’t win, what are you going to do next?

A: Pretty much the same thing. I’m going to go to the churches and I’m going to thank them. I’m going to thank my supporters for helping me. And then I want to find ways whereby I can interact with the commission, get on councils, so that I can be a force to be reckoned with to make sure that our voices are still heard.

Q: Have you ever come across your competitors out campaigning?

Q: Do you think it’s just that they’re counting on enough Republican voters showing up?

A: Yes. Yes. They pretty much have that feeling they really don’t have to do anything. Now, as far as registering to vote, I mean, we’ve gone crazy registering people to vote. But it’s actually getting people out to vote. They don’t have to come out and do what I’m doing. Look at it right now. It’s just me and the mosquitoes. This is pretty much all day. This is pretty much how it is. The feeling is: Why bother with the folks not coming out to vote? I love it. This is it. This is what I want to do. I’ve served the country for 25 years. I think I can serve Georgia. That’s what I want to do.

By Stan Alcorn and Shoshana Walter Reveal from The Center for Investigative Reporting November 7, 2016