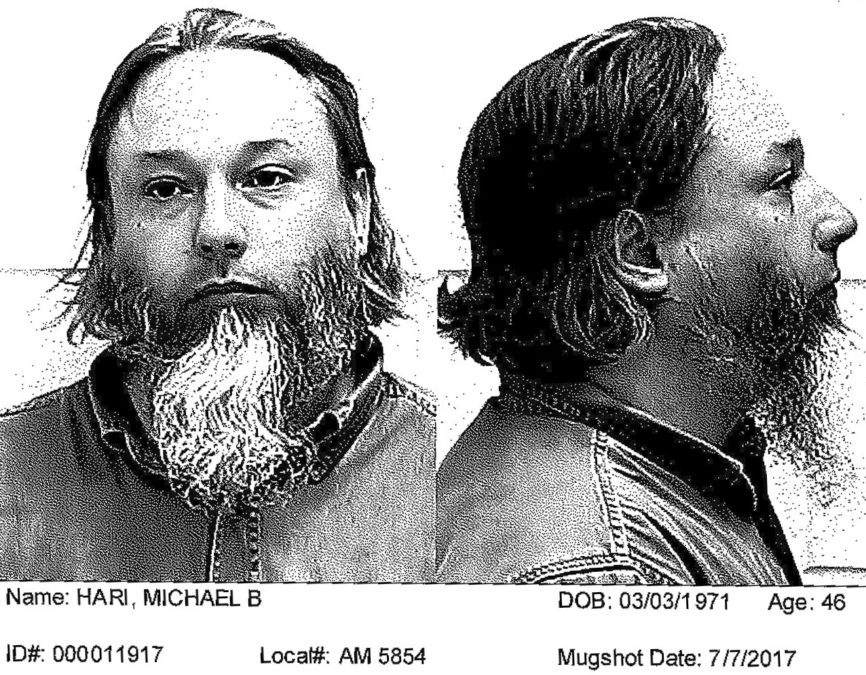 In this July 2017 booking photo released by Ford County Sheriff's Office, Michael Hari is seen on an assault charge.

Credit: Ford County Sheriff's Office via The News-Gazette, via AP

In this week’s roundup: A mosque bombing in Minnesota, a white supremacist group collapses due to family drama, some conspiracy mongers get sued and a movement builds to fight hate in online gaming.

This week, three men were arrested in connection with the bombing of a Minnesota mosque. While the attack didn’t kill anyone, the reported goal was to “scare” Muslims away from living in the United States.

One of the three suspects, Michael B. Hari, is a former sheriff’s deputy who submitted a proposal to build Trump’s border wall.

JJ MacNab, an expert in the world of far-right extremism, uncovered that Hari ran a group called the White Rabbit Three Percent Illinois Patriot Freedom Fighters Militia. The group’s website called Illinois a “failed state” and urged readers to take up “armed resistance” against the government.

The group’s insertion of “Three Percent” into its name is noteworthy. It indicates a fellowship with a larger movement that’s long been active around the fringes of the white supremacist ecosystem.

Founded in 2008, the Three Percent movement takes its name from the idea that only 3 percent of American colonists took up arms against the British. Members fashion themselves as today’s version of those rebels. On its website, the overarching Three Percent group insists it’s not a militia, nor is its aim to overthrow the government. Instead, the goal is, “to utilize the fail-safes put in place by our founders to reign in an overreaching government and push back against tyranny.”

The loosely organized group rose to national prominence when some of its self-identified members provided security to alt-right rallies around the country. Heavily armed Three Percenters were photographed in military-style combat gear guarding the perimeter of last year’s white supremacist Unite the Right rally in Charlottesville, Virginia.

Citing Charlottesville fallout, the group issued a “stand down order” urging members not to participate in future white supremacist events.

“We cannot have this organization tainted by new outlets as they will most certainly report that we have aligned ourselves with white supremacists and Nazis,” the statement read.

However, the mosque bombing arrests indicate that the group’s efforts to distance itself from hate haven’t been entirely successful.

MacNab said there was little doubt how to classify Hari’s group:

Special ask: Help us spread the word about the Hate Report. If you know someone who should be reading this, forward it to them and tell them to sign up.

Heimbach was reportedly having an affair with Parrott’s wife. When he was confronted by Parrott and his own wife about the affair, Heimbach attacked them. Heimbach’s wife is also Parrott’s stepdaughter from a previous marriage.

This graphic from Mic lays out the network of everyone’s relationships: In the police report, all four people involved, who live in the same Illinois trailer park, listed their occupations as “white nationalist.”

Following the fracas, Parrott pulled down the group’s website and deleted its membership registry. In an interview with the Daily Beast, Parrott said that the Traditionalist Workers Party was effectively dead.

“I’m done. I’m out,” Parrott told the Southern Poverty Law Center. “SPLC has won. Matt Parrott is out of the game. Y’all have a nice life.”

Tony Hovater, who rose to infamy following a questionably sympathetic New York Times profile, echoed Parrott’s sentiment. In a recent social media post, Hovater wrote, “There is no way for us to continue on with the TWP branding after what happened.”

Parrott erasing TWP data could could have larger repercussions. Both Parrott and Heimbach are named in a lawsuit filed by Charlottesville residents who assert the Unite the Right rally, which TWP helped organize, was designed to incite violence. On Wednesday, plaintiffs in the case filed an emergency motion aimed at preventing Parrott from “further destroying relevant evidence” and allowing the court to conduct a forensic analysis on what remains of the TWP’s computer systems. On the ground at the Unite the Right rally in Charlottesville, Brennan Gilmore captured video of a white supremacist driving into a crowd of counterprotesters. This week, with the help of Georgetown Law’s Civil Rights Clinic, Gilmore is suing Infowars head honcho Alex Jones, along with a handful of other right-wing journalists, for spreading a conspiracy theory that Gilmore says led him to fear for his safety.

Gilmore alleges Jones propagated the narrative that he was part of a “deep state” conspiracy to fake the attack as a way to harm the Trump administration.

He detailed the harassment he received in an essay for Politico:

As these theories spread, I started receiving hate mail. Some people sent me fairly tame comments on social media like, “God has a special place for you Gilmore,” “you are a lying communist Nazi” and “fuck you cuck.” Others threatened to kill me.

In a YouTube video, Jones claimed he was being sued by “Pope Francis,” because Georgetown is a Jesuit school.

“These outlets pose a danger to our country,” Gilmore said at a press conference. “There is a pattern of internet trolls pushing conspiracy theories that turn witnesses and victims into accomplices for propaganda rather than looking at facts.”

Gilmore told the Huffington Post that he has no intention of settling the case under any conditions, adding that he hopes to set a “legal precedent” that could be used in future lawsuits against conspiracy peddlers.

Last year, the yogurt company Chobani sued Jones for saying that refugees employed in the company’s Idaho factory were connected to the sexual assault of a minor and were involved in spreading tuberculosis. Jones eventually retracted the claims and settled the suit.

Pressure builds on Steam to crack down on hate

We recently reported that Steam, the world’s largest online gaming platform, hosted at least 173 user-created groups glorifying school shooters, along with a score of others pushing white supremacist and neo-Nazi ideology.

Now, an online petition urging Steam to “rid their platform of hate” has attracted over 15,000 signatures.

The petition charged that Steam, which is run by the multibillion-dollar gaming company Valve, has been largely reactive when it comes to policing its platform, only taking action to remove specific groups following critical media coverage. The petition lays out why Valve’s decision not to be proactive is problematic:

Valve’s lackadaisical response to this type of activity shows a lack of integrity but it also provides a place where hate can foster. Case in point, 17-year-old Nicholas Giampa found a safe haven for his ideals in Steam’s chat rooms. His profile was filled with Nazi imagery and white nationalist rhetoric. Giampa was a white supremacist. When his girlfriend’s parents’ found out about his views they reported him and he shot them dead.

We have repeatedly reached out to Valve for comment on its content moderation policies, but have yet to receive a response.

By Aaron Sankin and Will Carless Reveal from The Center for Investigative Reporting March 16, 2018