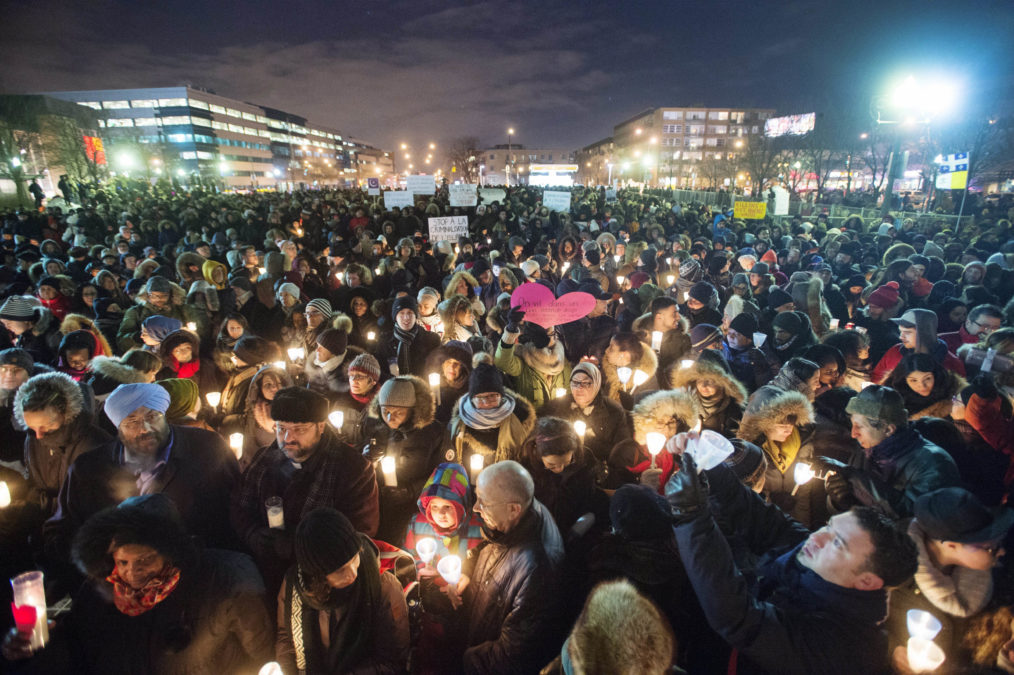 People hold candles for victims of the deadly shooting at a Quebec City mosque in January.

In this week’s report: A big spike in anti-Muslim hate crimes for our neighbor to the north, a congressman is shot in Virginia by a leftist hater and a federal hate crime charge for the Kansas shooter.

It’s not just the United States that is seeing an uptick in hate crimes. Our neighbor to the north saw a 253 percent increase in hate crimes against Muslims from 2012 to 2015, newly released government stats show. It’s a trend that continued through 2016 and into this year, according to the National Council of Canadian Muslims, which is collecting its own statistics.

“I believe we’re already way outpacing the data that we have from 2016 and therefore 2015,” the council’s communications director, Amira Elghawaby, told GlobalNews.

Canada was the scene of one of the worst anti-Muslim mass killings in North American history earlier this year. On Jan. 29, 27-year-old Alexandre Bissonnette walked into an Islamic center in Quebec and shot indiscriminately into a crowd of worshippers. He killed six men and injured several more.

The action by Canada’s parliament unleashed a torrent of anti-Muslim hatred. Khalid reportedly received 50,000 emails about the motion, many of which she said were direct threats. Commentator Sabreena Ghaffar-Siddiqui wrote in the National Observer:

Given the alarming rise in attacks against Muslims, it appears that Muslims are being singled out. Hate crimes have decreased overall, yet hate crimes against the Muslim community have doubled. One in four Muslims reports having encountered difficulties crossing borders. And Muslim youth are the least optimistic about the next generation facing less discrimination than them.

The rise in anti-Muslim hate in Canada comes on the back of a similar spike in the U.S. As we reported in a Hate Report last month, anti-Muslim hate crimes spiked 57 percent in 2016 according to the Council on American-Islamic Relations.

Just as a heated presidential campaign in the U.S. has been blamed for inflaming anti-Muslim rhetoric here, politics is also being blamed for Canada’s spike in anti-Muslim hate crimes.

Virginia shooter ranted against the GOP

James T. Hodgkinson, who police say opened fire Wednesday morning at a baseball game stocked with Republican lawmakers and staffers, has a long history of arrests, domestic abuse and hatred of the GOP.

As The Washington Post reported, Hodgkinson wrote two dozen letters to his local newspaper from 2008 to 2013 ranting about the right wing and the Republican Party. From one 2011 letter:

There’s a new version of what GOP stands for. It’s not the Grand Old Party anymore. It’s the Greedy One Percenters. I wish everyone could see how by changing the tax code, more than 95 percent of this country’s problems could be solved,” he added. “We need to vote all Republicans out of office.”

Hodgkinson, a 66-year-old Illinois resident, allegedly shot five people at the game, including the House Majority Whip Steve Scalise. He was then killed in a firefight with police. A friend of his told the Post that he had met Hodgkinson on the campaign trail for Bernie Sanders.

Investigators are looking at whether Hodgkinson “had long planned Wednesday’s assault and possibly studied the movements of lawmakers in the months he spent living in his van in Northern Virginia,” according to the Post.

This could be an isolated incident, not indicative of any larger problem in American society. One act does not a trend make. But I am concerned that, in this highly polarized and divided society, more people who have stances that fall within the mainstream, on the left and right alike, may consider political violence an attractive option. Should this occur, we will all suffer for it.

An epic trolling in Texas

Because everything is bigger there, Texas was home to this huge farce, when hundreds of people showed up to protect a Confederate-era monument that actually wasn’t under attack.

It all started on Facebook. According to the Daily Beast, back on May 18, a group calling itself “Texas Antifa” posted that hundreds of leftist anti-fascist activists would be holding a protest on June 10 at the statue of Sam Houston, a Confederate-era politician and slaveowner. The post goaded monument supporters, challenging them to show up and face off.

“The Fascists better not show up with violence or they will be limping home bruised, broken, hurt, and crying with their tails tucked between their legs,” the post read.

But the whole thing was a ruse. On Saturday, hundreds of far-right protesters showed up to defend the monument, many of them armed with guns. The only problem was there were few leftists there to square off against. It turns out “Texas Antifa” isn’t even a real group. It was just made up for the purposes of tricking the far right, and there never was an organized effort to protest at the monument.

Not that these protests haven’t happened. We’ve covered the controversy surrounding the removal of Confederate-era statues across the country in recent Hate Reports. Last month, for example, noted white supremacist Richard Spencer led a procession of citronella torch-wielding protesters to surround a monument threatened with removal in Charlottesville, Virginia.

And the event in Houston wasn’t all fun and games. In a video circulating online, a young far-right protester was choked by a man wearing fatigues. Surrounded by gun-toting, seemingly anti-fascist vigilantes, the man can be seen holding up posters depicting popular far-right memes and shouting, “what about the memes” before one of the militia put him in a headlock.

“What about the memes” has now … become a meme.

What a time to be alive.

As we noted in last week’s Hate Report, the Islamophobic organization ACT for America organized 20 or so “anti-sharia” rallies across the country last weekend. The protests were billed by the group as an American response to radical Islam, and “in support of basic human rights for all.”

There were arrests as the protests got violent in Seattle and St. Paul, Minnesota. There was a lot of shouting between the two sides but most of the protests ended peacefully.

Adam Purinton, the man who allegedly shot three men, killing an Indian immigrant in an attack at a bar in suburban Kansas earlier this year, was charged with a federal hate crime late last week.

The charges are significant because Kansas has a comparatively weak state hate crime law. While the state has a hate crime provision that allows a judge to hand down a more stringent sentence, the law doesn’t require the judge to do so.

By Will Carless Reveal from The Center for Investigative Reporting June 16, 2017