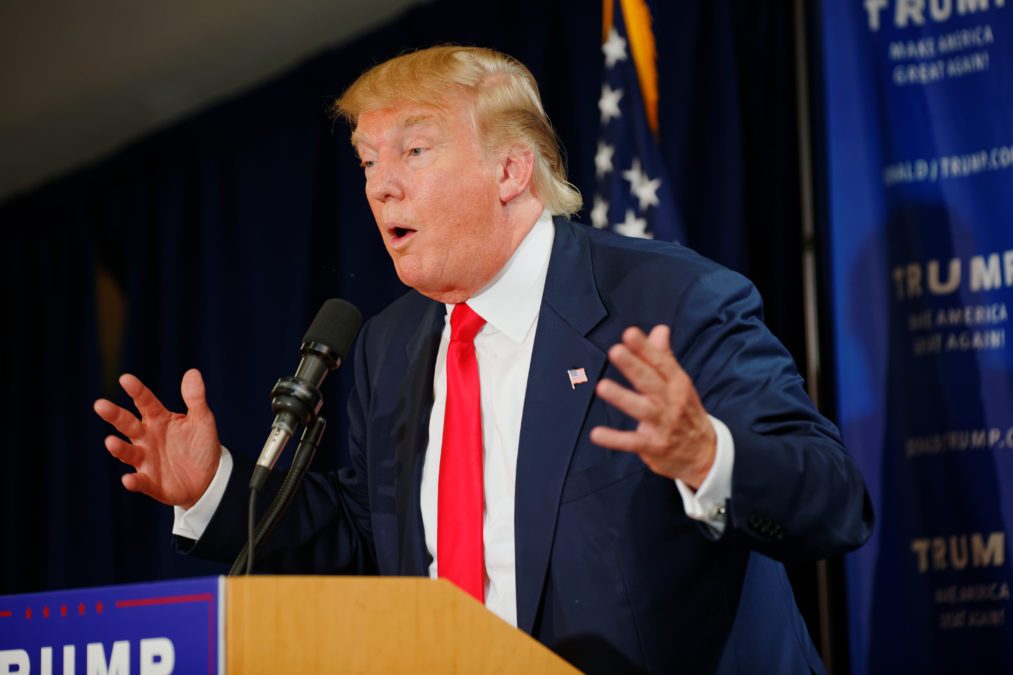 In this week’s Hate Report: The operator of a controversial neo-Nazi website goes to the other side of the planet to escape a lawsuit, Trump’s words are being used to bully minority kids and a hate crime charge reduces a Portland, Oregon, racist to a blubbering mess.

Bullying his opponents has been a hallmark of President Donald Trump’s combative style even before he got into politics.

That tactic has trickled down to schools across the country; students have been using the president’s words to attack minority students.

Last month, BuzzFeed discovered dozens of incidents of kids using Trump’s rhetoric to bully their Latino, Middle Eastern, black, Asian and Jewish classmates. This week, BuzzFeed upped the tally on the total number of incidents of Trump-related bullying of minority student to 81.

One Mexican-American 10th-grade girl in Indiana said that her white classmates sang the Dora the Explorer theme song every time she stepped onto the bus, along with shouts of “Build that wall” and jokes about deportation. She told her mother not to report it because she hoped “it would stop after a while.” An eighth-grade girl from Wyoming said that after the election, a group of boys in her class who vocally supported Trump began calling her “Jew girl.” She said she wasn’t sure if their actions were bad enough for her to tell a teacher. “I just started sticking up to them myself,” she said.

Then there’s the adults. More than a dozen Hispanics have reported being threatened for speaking Spanish in public. From a Univision story:

The episodes all have one thing in common: They involve some variation of the phrase, “This is America, speak English.” That’s used to suggest that it is wrong to speak a language besides English in U.S. territory. Donald Trump himself made a similar statement during the presidential campaign when he criticized Jeb Bush for speaking in “Mexican.” “He should really set an example by speaking English in the United States,” Trump said.

The BuzzFeed and Univision reports come from the Documenting Hate project, a media collaboration that we’re a part of that’s tracking hate in America and is led by ProPublica.

This week, ProPublica looked back at the first six months of the project to see what we’ve learned and what we still don’t know. It identified a few other trends, such as public transit systems being a frequent venue for harassment and people of color being told to “go back to your country.”

An American neo-Nazi flees to Nigeria Where is the last place you would expect to find one of America’s most prominent neo-Nazis? The correct answer is Lagos, Nigeria.

Nevertheless, that’s where Andrew Anglin, founder of the white supremacist site The Daily Stormer, told CNN he had fled to amid a lawsuit filed against him for launching a targeted harassment campaign against a Jewish woman, Tanya Gersh, who protested white supremacy in Montana.

Anglin has reportedly been missing in action over the course of the trial and hasn’t appeared in court; however, the case been able to proceed without him being physically present. CNN reports:

CNN reached out to Anglin, who told us he now lives in Lagos, Nigeria, where he says his rights to say what he want are not limited. He declined to comment to us on the Gersh case.

The suit, which was filed by the Southern Poverty Law Center on Gersh’s behalf, stems from Gersh’s efforts to get the mother of Richard Spencer, who runs the white supremacist National Policy Institute, to sell a property in Whitefish, Montana.

As Reveal reported earlier this year, Spencer draws funding from his family’s real estate holdings, which include cotton farms in northeast Louisiana.

After Spencer accused Gersh of attempting to extort money from his mother during the property sale, Anglin attacked Gersh on the site he’s run since 2013. The Daily Stormer ran a series of articles attacking Gersh and her family, urging readers to unleash what he called a “troll storm” against them. The resulting tsunami of harassment, which included death threats sent to Gersh’s 12-year-old son, triggered “serious and severe emotional and physical distress,” according to the lawsuit.

Gersh’s lawsuit, if successful, could change the environment for hate sites, making it clear to trolls they can be held responsible for the repercussions of what they write, at least in US civil cases.

Over 2,000 donations, totaling more $159,000 have been made to fund Anglin’s legal defense on the alt-right crowdfunding platform WeSearchr.

In May, I wrote a story about how GoDaddy, the world’s largest online web registrar, offers its domain name registration service to The Daily Stormer even though it is well aware of the site’s long history of explicitly racist content and penchant for organizing harassment campaigns against women and minorities.

When Reveal from The Center for Investigative Reporting reached out to Anglin for comment on that piece, his emailed response began, “More like Center for Inflicting Kikery.”

I hope Anglin is having a pleasant time in Nigeria.

In March, Faisal Gill became the first Muslim to serve as the chair of a state political party when the Pakistani immigrant was selected to lead Vermont’s Democrats. In May, Gill received a string of messages accusing him of trying to implement Sharia law and urging him to “get out or we will make you wish you did.”

Last week, the man who allegedly sent those emails was charged with a hate crime. Gill told Vermont Public Radio that this isn’t the first time he’d been on the receiving end of this type of hate:

“People saying, ‘Get out of politics, go home,’ stuff like that. Not just me, my children as well,” Gill says. “It makes you question, what are you doing? It does make you question, are you safe? I will say in the last few years though it’s gotten a little worse.”

Frederick Sorrell is accused of driving next to an African American Muslim couple in Portland, Oregon, earlier this year shouting racist, Islamophobic epithets while trying to ram their car and making threatening hand gestures.

He broke down in tears when asked about it outside a courthouse, where he’d just pleaded not guilty to a hate crime. Here are the reasons he gave for his actions:

On Saturday, about 50 Ku Klux Klan members gathered in Charlottesville, Virginia, to protest the city’s planned removal of a statue of Confederate Gen. Robert E. Lee from a city park. The rally was intended as a demonstration of power by the Klan, showing that members of the infamous white supremacist organization would be willing to come out in public to march in support of their beliefs.

However, the Klan’s was dwarfed by a throng of over 1,000 counterprotesters.

Shouting “racists go home,” the crowd drowned out the Klansmen’s chants of “white power.” Despite police lines, a few brief scuffles broke out. Counterprotesters tried to stop the Klansmen from entering and leaving the park.

Sign up to get The Hate Report by email every Friday. Have something to add? Aaron Sankin can be reached at asankin@revealnews.org. Follow him on Twitter: @asankin.

By Aaron Sankin Reveal from The Center for Investigative Reporting July 14, 2017