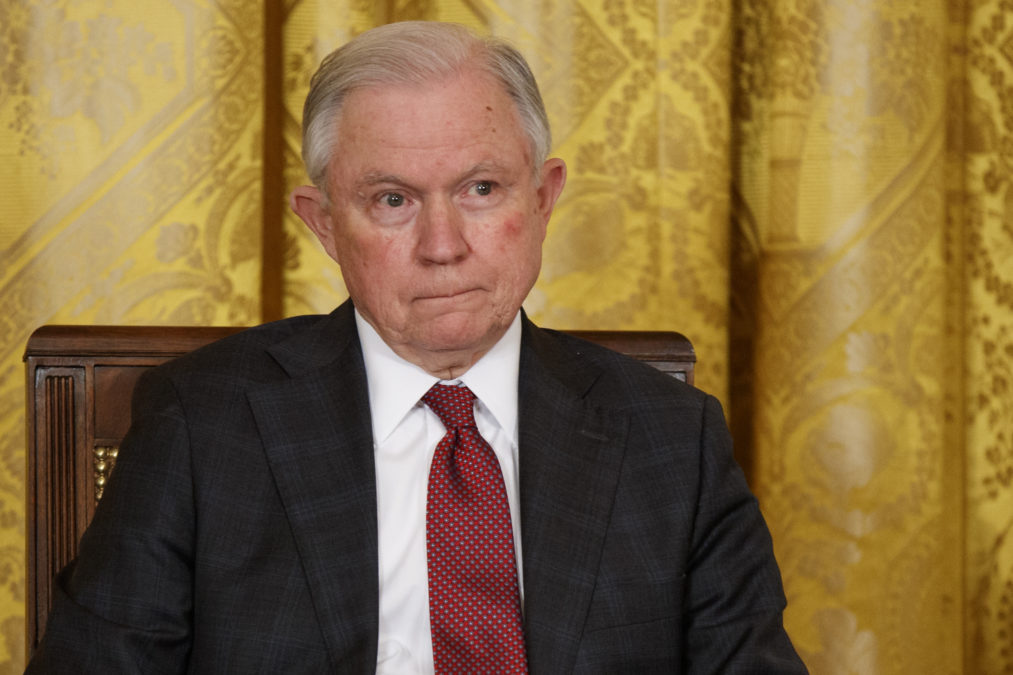 In this week’s roundup: The federal government has been prosecuting people for hate crimes, impact from last week’s Hate Report scoop, Richard Spencer’s struggles and a lynching mural in a high school finally gets painted over.

Ever since Attorney General Jeff Sessions took over the Department of Justice, the jury has been out on whether federal authorities would continue to aggressively pursue hate crime cases.

Sessions argued against expanding the federal hate crime law when he was a senator in 2009, and civil rights watchdogs have worried whether President Donald Trump’s top lawyer will continue to prioritize hate crime cases.

That’s why a slew of hate crime prosecutions and convictions caught our eye the last few weeks.

There already were signals that Sessions had ordered his staff to keep bringing such cases. In May, a Justice Department official told a Senate hearing that hate crimes remain a priority for prosecutors. The same month, the department secured its first conviction on federal hate crime charges for an attack based on gender identity.

Hate crime charges can be brought by a local prosecutor at the city, county or state level, if those places have hate crime laws. Or the feds sometimes get involved – usually in high-profile cases that get lots of media attention – and charge suspects with crimes under the 2009 Matthew Shepard and James Byrd Jr. Hate Crimes Prevention Act.

Federal hate crime prosecutions aren’t all that common. As of July 2016, based on the latest information available, federal authorities had charged a total of 256 defendants over the past seven years – an average of about 36 a year.

We’ll have to see how Sessions’ Justice Department stacks up against those numbers over the long haul. But the recent flurry shows that cases are still, for the moment, being brought.

Here’s a summary of recent action:

But it’s not just the federal government that has been active in the world of hate over the last couple of weeks. Late February and early March also saw a wave of violent and hate-fueled incidents across the country:

Last week, we reported on how the online gaming platform Steam had more than 100 groups glorifying school shooters and neo-Nazis. Since then, the company has taken down many of these groups from its site.

Of the eight user-created groups we specifically highlighted in The Hate Report, seven are no longer active. The only one still online as of Wednesday morning was called “I’m Future School Shooter Material” and describes itself as “a group dedicated to the bright young minds who are tortured by bullies.”

Also still active on the site is a user-created first-person shooting game, discovered by Slate, called “Columbine Simulator 2017,” which lets users play as the perpetrators of the horrific 1999 Colorado school shooting.

We repeatedly have asked Steam for comment about its content moderation policies but have not received a response. Gregory Conte (left), an ally of white nationalist Richard Spencer and director of operations at the National Policy Institute, faces off against a protester March 5 as police tackled and handcuffed each during Spencer’s visit at Michigan State University in East Lansing, Mich. Credit: Jake May/The Flint Journal-MLive.com via AP

White supremacist figurehead Richard Spencer held an event at Michigan State University this week, but it didn’t go entirely according to plan.

HuffPost’s Chris Mathias, whose coverage of the hate movement has been consistently fantastic, detailed the scene inside:

Spencer stood in a largely empty auditorium often used for livestock auctions, speaking to just 30 or 40 people, despite claiming to having issued 150 tickets for the event. He blamed the unrest outside for the paltry attendance. A livestream camera focused tightly on him, never panning out across the small crowd.

He rambled on about wanting to create ethno-states and “re-immigrating” people back to their homelands. This (undoubtedly violent) vision of ethnic cleansing would involve creating an ethnostate for “African-Americans who can not simply go back to Africa,” Spencer said.

Spencer’s presence on campus incited chaos. Over a dozen people were arrested in skirmishes between Spencer’s fans and anti-racist protesters.

Spencer’s speaking engagement at Michigan State was one stop on a planned cross-country college tour, which is running into some serious roadblocks. He also was supposed to speak at the University of Cincinnati, but that event was canceled after the school demanded an $11,000 fee to provide security. Spencer threatened to sue Kent State University after that school rebuffed his effort to speak on campus.

Spencer is also losing some key allies. Kyle Bristow announced last weekend that he was resigning as director of the Foundation for the Marketplace of Ideas, a group that has supported Spencer’s attempts to spread his message, both publicly and through the courts.

Bristow was instrumental in Spencer being able to speak at Michigan State in the first place, suing the university over its initial decision to deny Spencer’s request to speak on campus. Bristow settled with the school, which ultimately allowed Spencer’s event to go on.

Bristow blamed recent critical media coverage for his withdrawal from the public sphere. Earlier this month, the Detroit Free Press reported that Bristow, when he was an undergraduate at Michigan State, had pushed for things such as an on-campus “Catch an Illegal Immigrant Day,” which led the Southern Poverty Law Center to designate Bristow’s student organization as a hate group.

Speaking to the Detroit Metro Times, Spencer acknowledged that his movement has faced some setbacks lately.

“There’s a difference between defeats and being defeated,” he said. “I’m here, I’m talking to everyone, people who got punched in the face made it in. … But yes, we are in a really tough state.”

A mural comes down

Until last week, an eye-catching mural adorned a wall of the gymnasium at South Cumberland Elementary School in Crossville, Tennessee. It depicted a man holding a Confederate flag watching as another man, noose around his neck, dangled lifelessly from a tree. Under the image, big red letters spelled out “Rebel Barracks.” It is not clear how long the mural had been up, but CNN reported the school got complaints about it in December.

Both figures in the mural appeared to be white, but lynching historically has been a tool of deadly intimidation against black people across the South.

David Clark, who works at another local school, spent months lobbying administrators to take down the mural, but to no avail. Fed up, he posted about the mural on Facebook.

“Germany does not display Nazi symbols,” he wrote. “This is not heritage, it is racism.”

After Clark’s post went viral, the school quickly took down the art.

“Removing it didn’t seem like a priority … but white supremacy in this country is becoming too organized and too emboldened to ignore something like this in our schools,” Clark told CNN. “I am glad they got to painting, but I am not sure why they ever wanted lynching (as) a part of their school spirit.”

By Will Carless and Aaron Sankin Reveal from The Center for Investigative Reporting March 9, 2018