Donate
Rape in the Fields 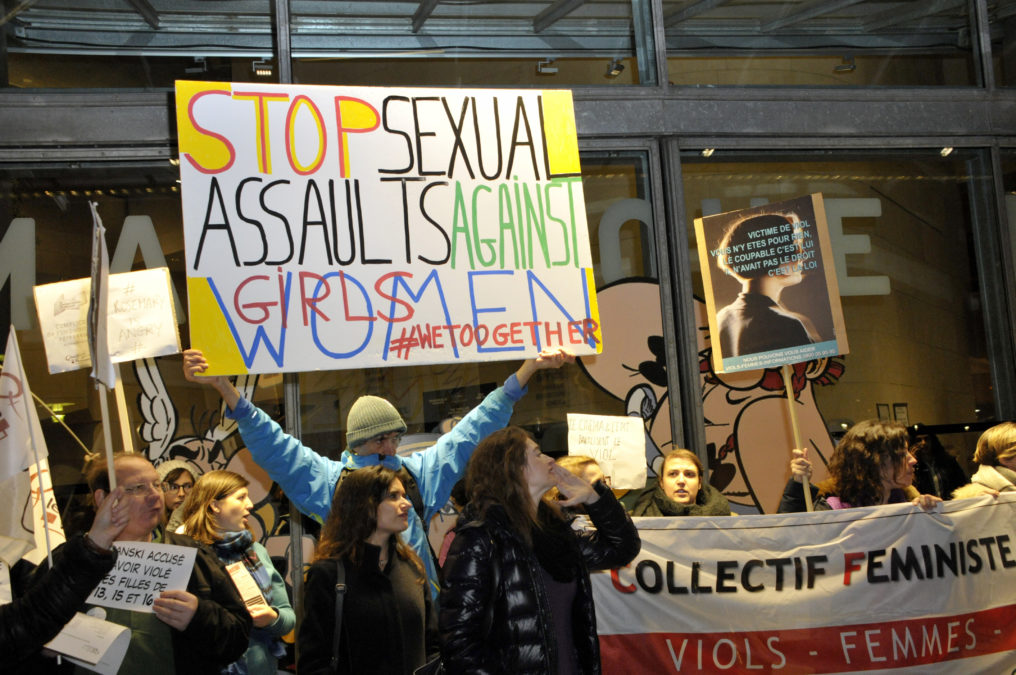 People demonstrate Oct. 30 against a retrospective on the work of filmmaker Roman Polanski, who has been accused of a string of sexual assaults, at the Cinematheque Francaise film archive in Paris.

From Hollywood to newsrooms to college campuses, the recent accounts of sexual harassment and assault by prominent men have been as horrifying as they have been unyielding.

That dozens of women have come forward so publicly to share their experiences with sexual violence is all the more astonishing because the vast majority of victims never report the crime.

Sexual assault is notoriously hard to quantify but it happens everywhere – in farm fields, on the night shift and in the military. And it happens more often than we might think.

According to a new data analysis from researchers at the University of Michigan, by the time American women are in their mid-40s, a quarter of them will have been raped at some point in their lives.

The study, published earlier this week, takes a novel approach to understanding how often rape happens. It relies on a federal survey conducted by the U.S. Centers for Disease Control and Prevention known as the National Survey of Family Growth.

Conducted by the federal government since 1973, the survey is typically used by academics and policymakers to understand trends in reproductive health and American families. It’s used to inform health education and programs, and it’s a primary source of statistics on marriage and divorce rates in the United States.

But it also asks questions that provide information about people’s experiences with rape, and because it’s a high-quality government survey, it can give us new insights into national sexual assault trends.

Here are three notable findings from this study:

1. At least one in four women are raped by the time they turn 44, and that number isn’t budging.

The researchers examined this issue over time and found that between 2002 and 2012, things had not improved, with rape rates remaining the same over the past decade.

Meanwhile, among men, nearly 8 percent say they have been raped by the time they turn 44.

In other words, the study’s finding that 25 percent of American women in their 40s have been raped doesn’t include all of the behaviors that could be considered sexual assault or rape, which is defined by the Department of Justice as sexual penetration of any kind. As a result, this study is “likely to underestimate total assault, potentially by a large fraction,” the researchers write.

2. The less higher education you have, the more likely you are to be raped.

Women between the ages of 25 and 29 with less than three years of college are more than twice as likely to have been raped than women who have gone to college for four or more years.

This was even more stark for men. In this same age group, males with less college experience are four times more likely to have been forced into sex than those who had spent four years or more on campus.

The researchers theorize that this might be due to the general characteristics of people who go to college, plus the resources available to them once they get there. For example, people who go to college tend to come from families that are more educated and wealthier, which has been linked to lower risk of sexual violence. It’s also possible that colleges provide programs and structures that help protect students from rape.

“This result is alarming, because it means that a national focus on students enrolled in college is not enough to address the nationally high levels of this experience,” the researchers write.

The National Crime Victimization Survey has also found that young people who are not enrolled in college have a higher chance of having been sexually assaulted or raped.

The researchers say that the takeaway from this finding isn’t that sexual assault on college campuses is low. Instead, “at the national level, this is strong evidence that programs to assist those who are not in college deserve substantial attention,” they say.

3. Violence isn’t the most common type of force used to coerce women into sex.

Of the women who said they’d been raped, about 44 percent of them said they were pressured into sex “by his words or actions, but without threats of harm.”

Women also reported being physically held down, and being pressured by the physical size or age of the rapist.

William Axinn, the lead author of the new study also designed the University of Michigan’s 2015 survey on campus sexual misconduct, which asks a similar question about verbal pressure and sexual assault. It, too, found that verbal pressure – not just intoxication, as is often assumed – was an important form of coercion among undergraduates.

In the campus study, verbal pressure included having the abuser threaten to end the relationship, spread rumors about the victim, or insult their appearance or sexuality.

This data analysis doesn’t claim to provide the definitive estimate of rape in the United States. Among its weaknesses, the analysis underestimates the scope of sexual assault and rape. That’s because the National Survey of Family Growth, originally designed to address questions related to reproductive health, seeks to explore topics like pregnancy risk.

But using this data to look at national rape trends produces novel and important information about sexual violence in the United States because the National Survey of Family Growth is a sophisticated study that uses what are considered best practices of survey methodology. It is statistically representative of the country, uses techniques that elicit more honest answers, and has a high response rate of greater than 70 percent.

And importantly, the National Survey of Family Growth doesn’t ask questions about sexual violence in the context of crime and victimization, which the National Academy of Sciences says can discourage participants from admitting their actual experiences with sexual assault.

Two other government surveys are most often used to track sexual violence victimization at the national level.

The National Intimate Partner and Sexual Assault Survey from the CDC is a phone survey that’s conducted on an ongoing basis. It estimates that about 19 percent of American women have been a victim of attempted or completed rape at some point in their lives.

The Department of Justice’s National Crime Victimization Survey is a nationally representative study of major non-fatal crimes, including rape and sexual assault. In 2015, the survey estimated that there were 284,350 incidents of sexual violence among both men and women.

By Bernice Yeung Reveal from The Center for Investigative Reporting November 2, 2017