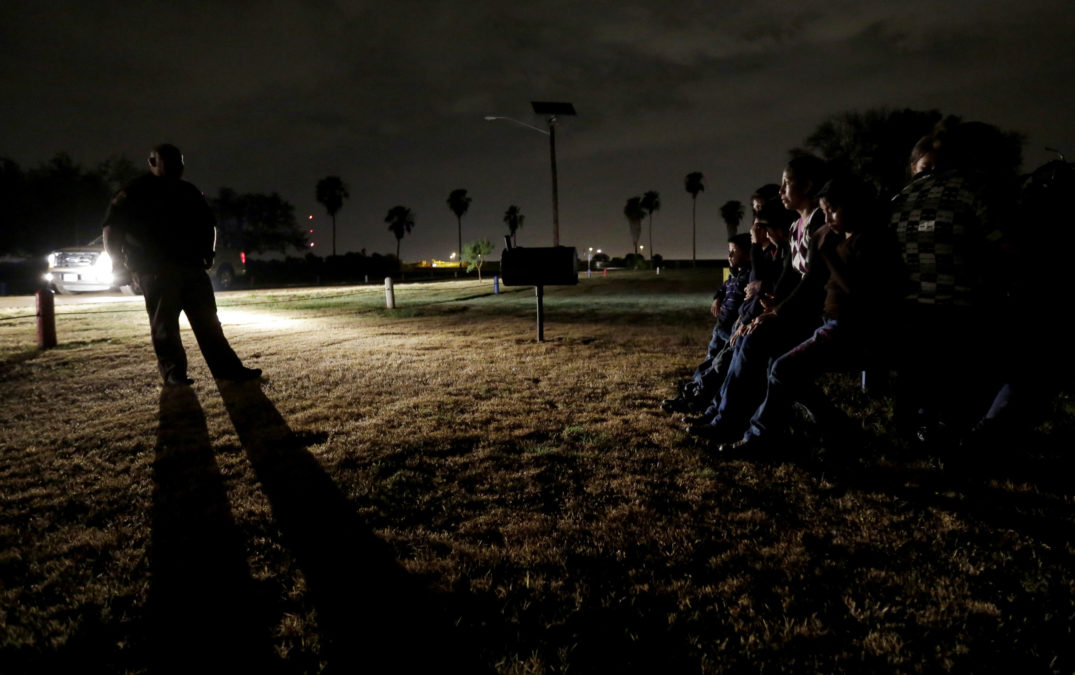 In this 2014 photo, migrants from Honduras and El Salvador, including children, are stopped in Granjeno, Texas, after crossing the U.S.-Mexico border. ICE is increasingly relying on dental and bone scans to determine age of some youths, a practice that has been criticized by Congress and federal auditors.

One teen arrived in the United States in 2015 seeking asylum after his father was murdered in Somalia. Another fled Afghanistan last year after the Taliban killed his father and the Islamic State group killed his brother.

But instead of building new lives in the U.S., both ended up in adult detention centers based on the opinion of the same University of Texas dentist – who never met them or examined their teeth.

It’s the latest example of the Department of Homeland Security failing to abide by federal policies, laws and directives from both Congress and internal agency auditors about how to determine the age of unaccompanied immigrant youths, Reveal from The Center for Investigative Reporting has found.

For more than a decade, the department’s Immigration and Customs Enforcement has come under fire for its use of  dental and bone scans. Congressional committees twice have directed ICE to stop subjecting youths to the procedures. A federal audit questioned the scientific validity of bone and dental scans to determine age with much precision.

“Using radiographs of a person’s bones or teeth … cannot produce a specific age due to a range of factors affecting an individual’s growth,” the audit states. “These include normal biological variation, as well as cultural and ethnic differences.”

Mixing juveniles and adults in immigration detention centers violates a longstanding federal decree. But youths who arrive in the country unaccompanied often lack official documents such as birth certificates, and immigration authorities are legally required to make a determination on age within a few days.

On these two occasions, ICE held youths in adult detention centers based on analysis federal immigration authorities had conducted by Dr. David R. Senn, a dentist and clinical assistant professor with the dentistry school at the University of Texas Health Science Center at San Antonio.

According to one of Senn’s reports obtained by Reveal, he determined in 2015 that a Somali youth, Billal I. Caroog, was between 17 and 23 years old. Caroog had fled Somalia after his father was murdered, according to court records.

“The empirical statistical probability of (Caroog) having attained 18 years of age is 92.55%,” Senn’s report states.

U.S. District Judge Marsha J. Pechman disagreed, ruling that the age determination process in Caroog’s case was unlawful. Her order notes that a 2009 trafficking victims law requires the Office of Refugee Resettlement to use “multiple forms of evidence” rather than relying exclusively on dental and bone scans.

“The procedures … here resulted in the exclusive use of dental radiographs to make an age determination,” states Pechman’s May 2016 order, which required Caroog to be released from an adult detention center near Seattle. The Department of Homeland Security was ordered to immediately transfer Caroog out of adult detention until he “reaches the age of 18 based on the birth date he reported to Department of Homeland Security officials at the time he applied for admission into the United States.”

In September, ICE echoed that ruling in its own internal handbook, which states that dental and bone scans must be used only as “a last resort,” once all other avenues of verifying a young person’s purported age have been exhausted.

When reached by phone today, Senn declined to talk to Reveal on the record.

Attorney Matt Adams with the Northwest Immigrant Rights Project represented Caroog in the case. In an interview with Reveal on Wednesday, Adams repeatedly called Senn’s dental analysis “pseudoscience.” He said Senn “keeps his hands clean and does it all on paper without ever even seeing the kids, using some kind of template formula that has the most drastic consequences on children.”

When Caroog’s X-rays were taken, Adams said he wasn’t aware they could be used as evidence against the youth. The X-rays, along with mug-shot-style photos of Caroog, were sent by the Office of Refugee Resettlement in Oregon to Senn’s office. Senn’s report states the X-rays were “provided by client” but doesn’t list who the client is.

In making the determination that ICE used to take Caroog into adult detention, Senn did not meet Caroog or physically examine his teeth.

Once ICE determined he was an adult, Caroog was taken from his foster family in handcuffs and placed in the Northwest Detention Center in Tacoma, Washington, where he was held for nearly six months until the federal judge ordered his release.

In a more recent case, Senn produced a dental analysis in December for another youth. The youth, H.S., fled Afghanistan after his father was killed by the Taliban and his brother was killed by the Islamic State group, according his attorney, Mariel Villarreal, who works with Pangea Legal Services in San Francisco. Reveal is using the youth’s initials because he is a minor and faces great risk if identified.

Senn’s report on H.S.’s dental scans contains much of the same language as the age estimation he made in Caroog’s case.

With H.S., Senn found the “range of possible ages for such a male is 16.56 to 23.18 years,” a span of nearly seven years. He concluded there was a 79.5 percent chance that H.S. was older than 18. Last week, a California immigration judge disagreed.

“The respondent’s birth certificate and consistent assertions of being under eighteen outweigh the dental age test,” Judge Patrick O’Brien wrote in an April 23 ruling. He directed ICE and attorneys for H.S. “to take appropriate actions consistent with the court’s finding.”

However, as of today, ICE continued to hold H.S. at the Mesa Verde Detention Facility, an adult detention center in Bakersfield, California – 10 days after O’Brien’s ruling. Attorneys for ICE submitted a motion to reconsider based on evidence obtained after the immigration judge’s order.

Congressional committees in 2007 and 2008 directed ICE to halt the practice of obtaining dental and bone scans, calling the practice “insensitive and inappropriate.”

But ICE continued to use the scans, and the following year, an audit by the Department of Homeland Security’s Office of Inspector General criticized ICE’s reliance on them. The audit found that ICE failed to keep data on the practice, including how many minors had been subjected to bone and dental scans and how many had been commingled with adults as a result.

One problem with using dental and bone scans in immigration cases is that research was largely based on studies of  “ethnically homogenous populations,” the audit states.

In 2009, a new federal law called the William Wilberforce Trafficking Victims Protection Reauthorization Act required the Department of Homeland Security to develop age determination procedures that take “multiple forms of evidence” into account, including “non-exclusive use” of radiographs.

Dubbed the dental detective, Dr. Michael Bowers, a lawyer and dentist who writes about dental forensics, told Reveal that dental exams can be useful but should never be used as the sole evidence to make a medical age determination.

The Washington Post’s Radley Balko has chronicled challenges to a bite-mark analysis championed by Senn. In 2016, Texas Monthly wrote that the Texas Forensic Science Commission was examining use of bite-mark evidence in criminal cases and gathering input from experts, including Senn, who insisted that bite-mark analysis was based on science.

In making his case to the commission, The Dallas Morning News reported that Senn invoked the need to keep children safe. Bite-mark analysis, for instance, has been used in child abuse cases.

“If this committee decides to declare a moratorium on bite-mark analysis, children will suffer,” he said.

But today, X-ray dental reports by Senn and other medical professionals working with ICE can end up sending minors to adult detention centers, which may not be safe for them.

“This practice has led to the erroneous placement of children in facilities commingled with adults who may seek to prey upon young children,” the House Appropriations Committee stated in its 2008 funding bill. “The Committee directs the Department to cease immediately its reliance on fallible forensic evidence as determinative of a child’s age, and provides no funding for this activity.”

Adams, whose client was released from an adult detention center despite Senn’s age estimation, said he believes dental and bone scan analyses are “basically giving rubber stamps to ICE to strip children of the protections they should receive.”

By Aura Bogado Reveal from The Center for Investigative Reporting May 3, 2018