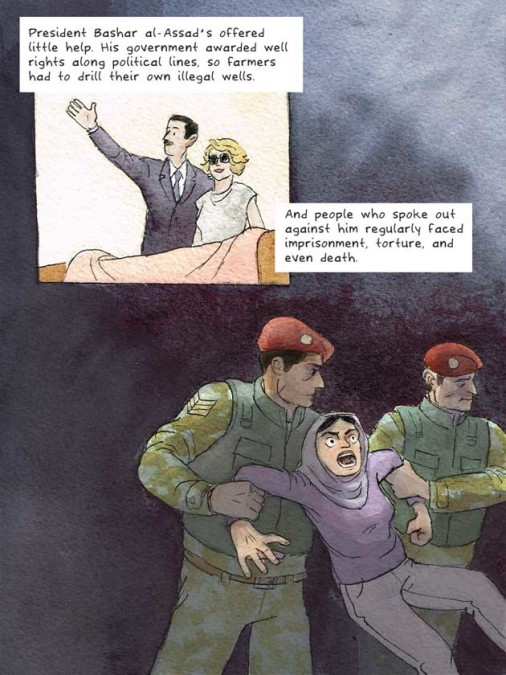 Mennonite farmers in Mexico, who face rapidly depleting groundwater, are considering leaving their homes and immigrating to another part of the world in search of better water supplies, according to an article Monday in The New York Times.

The farmers live about 50 miles northwest of Chihuahua, where the aquifers below their fields are forecast to go dry in about 20 years as a result of overfarming and aggressive irrigation of arid land.

As more groundwater wells in the area are drained, tensions are rising among the Mennonites and surrounding communities.

A group of activists known as El Barzón has campaigned to shut down illegal wells and break dams on Mennonite land. Joaquín Solorio, a Barzón activist whose parents had to sell their cattle after their well, next to a Mennonite farm, dried up, said the group had lodged complaints about illegal water use.

The article goes on to describe deadly conflicts arising from water disputes in the area.

It is the latest example of a world grappling with depleting water sources and increasingly violent conflicts erupting where water shortages have taken hold.

This cartoon from last year depicts the role water disputes played in the political conflict that led to the Syrian civil war, which has displaced millions of people: The issue appears to be drawing wider attention from the public. Following the Paris terrorist attacks, an opinion column by Google executive Yonatan Zunger was circulated widely on social media, where he expressed his belief that water shortages play a critical role in the growing conflicts in the Middle East:

But there’s one profound factor which has driven the violence in the Middle East far more than oil ever could: water.

The entire Middle East has been in a water, and thus food, crisis for decades. In Egypt, for example, the Nile Valley has been drying out ever since the Aswan Dam was completed in 1970; as this once-fertile soil turned to desert, people have streamed into Cairo, doubling and tripling its population by forming tremendous shantytowns. Unemployment was extreme, as it’s not like the cities suddenly had tens of millions of new jobs in them; the government kept order as well as it could by importing grain in tremendous quantities (the government’s by-far largest annual expense) and selling bread cheaply. Unfortunately, a drought in Russia and Ukraine, Egypt’s primary suppliers, caused those countries to cut off wheat exports in 2011 – and the government collapsed soon after.

Syria is a similar story: the lead-in to the collapse of Bashar al-Assad’s dictatorship was steady droughts in the Syrian countryside driving people into the cities by the hundreds of thousands, leading to mass unemployment and unrest. People’s livelihoods had simply disappeared. Stories like this repeat across the entire Middle East.

The New York Times article cited Reveal’s investigation into a Saudi dairy company that bought 15 square miles of land in the Arizona desert and tapped into local aquifers to grow hay, shipping the dairy feed back to Riyadh. Saudi Arabia’s groundwater has been largely depleted, and now its government has told its companies to import food commodities from overseas. A water expert from Arizona State University predicated the aquifer supporting the Saudi hay farm in the state would be dry in a generation or two.

Still, some people don’t think the aquifers will run dry, according to the The Times:

Several Mennonite farmers said they were skeptical that Chihuahua would run dry. Water was God-given, one farmer said, and only God could take it away.

“Doesn’t water go in a cycle?” Mr. (Abraham) Wiebe asked. “You pull it from the ground, and then it rains from the sky.”

Scientists paint a different picture. They say even water-wealthy countries such as the United States are draining their groundwater at unsustainable rates. California, which produces about half of the country’s fruits, nuts and vegetables, is draining its aquifers, which already is causing expensive havoc in the state.

By Nathan Halverson Reveal from The Center for Investigative Reporting November 20, 2015