If the US forced people to vote, would it improve turnout? 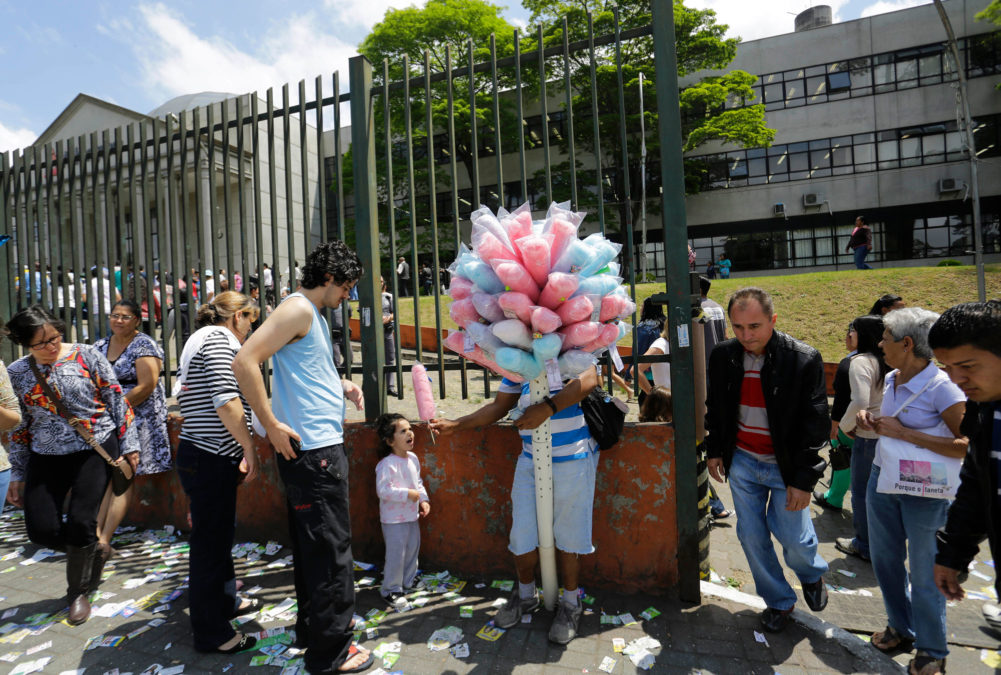 A man sells cotton candy in front of a polling station for municipal elections in Sao Paulo, Brazil, on Oct. 2, 2016.

In the last stretch of the 2016 U.S. presidential campaign, Hillary Clinton and Donald Trump repeated, at rally after rally, the most basic call to action: getting people to actually get out and vote.

The U.S. has more than 250 million people old enough to vote, one of the largest potential voting populations in the world, but only about 52 percent of them cast ballots in this election, according to preliminary data.

This means that more than 100 million people possibly did not vote at all, according to numbers compiled by professor Michael P. McDonald of the University of Florida. The figures may change, as it will take days to get final results.

From 1828 to 1900, the average percentage of Americans who cast ballots was 73.5 percent of the voting-age population. From 1900 to 2012, the average turnout fell to 57.5 percent, according to an analysis of data from  The American Presidency Project, a nonprofit and nonpartisan project hosted at the University of California, Santa Barbara.

In 1996, when incumbent Bill Clinton beat Republican candidate Bob Dole, less than half of the eligible population voted to choose a president. In the 2012 presidential election, 55 percent of those within the voting age cast a ballot in the race between incumbent Barack Obama and Republican challenger Mitt Romney. Last year, Obama endorsed the idea of mandatory voting in the U.S. after a poor turnout of 36 percent in the midterm elections hurt Democrats in Congress.

Could mandatory voting be a solution? The answer is debatable, at best. Large democracies with mandatory voting, such as Brazil and Mexico, have had higher turnout rates than the U.S., though those countries have seen slightly lower rates in the latest general election cycle.

Mandatory voting has been in place in Brazil, the biggest democracy in the world that has compulsory voting, since 1932 – though only four democratic elections actually were held through 1989. Currently, among its more than 150 million voting-age citizens, people between the ages of 18 and 70 are required to vote, except for a small segment of the electorate, including people who cannot read.

The penalty for not voting in Brazil is about $1.10 per election but can escalate to harsher sanctions, such as losing some citizenship rights, including the ability to get a passport or to work as a civil servant.

This has been enough to motivate many Brazilians to vote.

Brazil’s stark military dictatorship ended in 1985, and the new constitution mandating voting was approved in 1988. Turnout has been consistently high, with an average of 79 percent for presidential elections, according to data from the International Institute for Democracy and Electoral Assistance.

Some researchers measure the turnout rate by looking at votes cast as a percentage of eligible voters. However, according to the Pew Research Center, considering that many hard-to-measure factors can affect eligibility (citizenship, imprisonment, residency rules and other legal barriers), “in practice turnout calculations usually are based on the estimated voting-age population.” In the methodology used by International Institute for Democracy and Electoral Assistance and the American Presidency Project, estimated turnouts are based on the voting-age population.

However, Brazil is still a young democracy that has elected only four presidents since the end of the military dictatorship. Recent numbers show a lower turnout rate than in the period right after the first democratic elections. In 2014, amid a turbulent and polarized presidential election, the turnout rate was 74.4 percent – the lowest figure since the end of military rule.

In Mexico, another country with mandatory voting, the turnout rate in the 2012 presidential election was 64.6 percent among more than 75 million voters – higher than in the U.S., but not as high as in Brazil or Australia, which also has mandatory voting. When you consider the period starting in 1946, the average turnout rate in Mexico was 53.6 percent, even lower than in the U.S. for a comparable period (57.5 percent since 1948).

Turnout in Italy also has been dropping for some time, after mandatory voting was repealed in 1993. The country has considerably fewer voters – about 43 million in the most recent election – and elects a parliament. Before the repeal, turnout averaged 93 percent from 1946 to 1992, according to data from the International Institute for Democracy and Electoral Assistance. In the last major election in 2013, the turnout rate was 68.3 percent.

Sérgio Spagnuolo is a Brazilian journalist and founder of the agency Volt Data Lab, writing about politics and economics. He holds a master’s degree in international relations and human rights from the Pontifical Catholic University of São Paulo and is visiting Reveal as a fellow for the International Center for Journalists. He also was a fellow at the Tow-Knight Center for Entrepreneurial Journalism in New York.

If the US forced people to vote, would it improve turnout?

By Sérgio Spagnuolo Reveal from The Center for Investigative Reporting November 11, 2016