Severely injured worker sues Tesla: ‘I’m not who I used to be’ 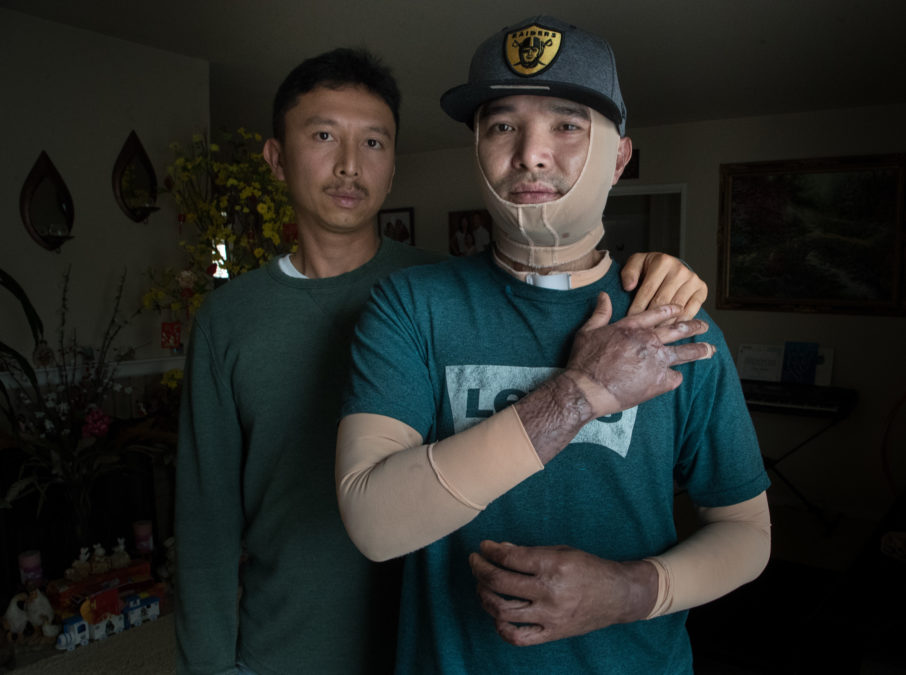 Chuong Nguyen (left) helps look after his brother, Son, as he recovers from a severe burn injury at Tesla's car factory in 2017. “Luckily, I have my family for support,” Son Nguyen said.

A man severely burned in an electrical explosion at Tesla’s car factory is suing the automaker for allegedly putting him in harm’s way “in order to increase productivity at the expense of human lives.”

Son Nguyen was working as a contractor at the Fremont, California, factory on June 5, 2017, when an explosion called an arc flash threw him back 15 to 20 feet and engulfed him in flames.

Nguyen’s lawsuit says Tesla should have cut electricity to the equipment he was working on, but refused to because the company didn’t want to temporarily stop production.

Nearly a year later, he is in constant pain and covered in scars and skin grafts, his pinky finger amputated, a compression garment covering him from head to knees. Nerve pain, which he says feels like “thousands of pins and needles poking you,” keeps him up at night. He struggles with basic tasks and dreads the surgeries to come.

“I don’t want anybody to go through what I went through,” said Nguyen, 37, in an interview with Reveal from The Center for Investigative Reporting at his sister’s house in San Leandro, California. “I just want Tesla to have a safer workplace for everyone.” Son Nguyen was working as a contractor at Tesla’s Fremont, Calif., factory when he was burned in an electrical explosion in June 2017. He is suing Tesla. Credit: Paul Kuroda for Reveal

Tesla, in a statement, blamed Nguyen’s employer, Mark III Construction, for having “not followed proper safety protocols and regulations.”

“We have extensive protocols to prevent electrical safety injuries, and these protocols must be followed by everyone in the factory, including third-party contractors,” the statement said. “Unfortunately, that did not happen in this case. We have since imposed even stricter controls, and no similar incidents have occurred.”

Safety officials cited Mark III Construction – and not Tesla – with violations following the accident. However, Nguyen’s suit states that Tesla “controlled” the contractor and safety on the worksite.

Tesla made Nguyen work on energized equipment, the suit states, “with the knowledge of the probable dangerous consequences of prioritizing production numbers over the safety of workers in order to meet (Tesla’s) aggressive production schedule.”

The suit asks for punitive damages because it says Tesla acted in “conscious disregard for the rights and safety of others.”

Nguyen was an electrician trainee working for Mark III Construction, wiring in an electrical plug just before the explosion. Tesla had hired the Sacramento-based company to install dozens of “supercharger” stations where electric vehicles can fuel up. The suit says Tesla supplied Mark III with “old, defective, faulty, unsafe electrical components” with knowledge that it would be dangerous.

He spent two months in the hospital getting skin from his thighs and back grafted onto his arms, chest and neck. It was six months before he could use his hands, he said, and he still needs both of them to lift a cup. Son Nguyen lost a finger and is covered in scars and skin grafts from his accident at the Tesla factory. He still struggles with basic tasks. Credit: Paul Kuroda for Reveal

“I remember waking up after surgery, all wrapped up,” Nguyen said. “I was just terrified. I thought I was dead.”

He has a long recovery ahead of him. “When I think about my future I’m really down,” he said. “I’m not who I used to be.”

Dan Carlton, president of Mark III, said he couldn’t discuss the incident because of a non-disclosure agreement.

“We learned a lot and it was a horrible accident,” he said.

The state agency didn’t investigate or cite Tesla because it determined the company wasn’t responsible, according to Cal/OSHA spokeswoman Erika Monterroza. Regulators could have opened an investigation of both companies if there was evidence that Tesla created the hazard, should have corrected it or had responsibility for safety conditions on the worksite. “That condition did not exist for this incident,” Monterroza said in an email.

A former member of Tesla’s health and safety team, however, said Tesla should have done more to supervise the contractor and prevent the accident.

“What have we done as a company to prevent it? Not a lot,” said the former Tesla safety professional, who requested anonymity because of Tesla employee confidentiality agreements. “Are we still exposed to the same hazards? Yes.”

Tesla injury logs obtained by Reveal show four other employees suffered electrical burns in 2017. The lawsuit refers to other electrical injuries at Tesla as evidence of “unsafe work practices” at the plant.

In March 2017, a production associate’s fingers were burned, records show. In June, eight days after Nguyen’s accident, an employee’s leg was burned. In late June, there was another electrical burn, and in August, another one.

Nguyen has a hard time looking upward because his neck skin doesn’t stretch. He can’t do routine chores, such as getting clothes out of the dryer. He certainly can’t play basketball or go bowling with friends like he used to.

But one thing that especially bothers him is his inability to help his parents, who live in Oakland. He used to cut the grass, drive them around and help out around the house.

“I can’t do that anymore. I feel so bad,” he said. “Now it’s the other way around. When I see I can’t help my mom and my dad I just feel so down. I just walk away.”

His siblings and parents look after him now. “Luckily, I have my family for support,” he said. “I’m very fortunate.”

Back in 2014, Cal/OSHA investigated another arc flash at the Fremont factory, and that time Tesla was found responsible for serious safety violations.

In that case, recently detailed by BuzzFeed News, a technician named Paul Lewis was cleaning inside a high-voltage electrical panel when an explosion threw him to the ground, knocking him unconscious. In a witness statement provided to state investigators, a co-worker described finding Lewis on his back, bleeding from his mouth and nose.

“His arms were burned. His vest was melted. There was a puddle of blood under his head,” the co-worker wrote. When Lewis came to, he didn’t know who he was or what had happened. He had burns on his arms, shoulder, back and face, according to Cal/OSHA records.

Safety officials found Tesla didn’t provide adequate training and protective gear and failed to make sure that only a qualified electrical worker performed the task. After Tesla appealed the citations, the $70,000 fine was reduced to $40,400.

Tesla has had electrical problems outside the factory as well. An employee received electrical shock and burn injuries in December while working at a solar energy facility Tesla operates in Massachusetts.

Federal officials determined that workers there didn’t have enough training or protective gear and fined Tesla $110,863, the biggest safety fine in the company’s history. Tesla is contesting it, and said, “the employee was performing work on a piece of equipment that he was not authorized or tasked to work on.”

Severely injured worker sues Tesla: ‘I’m not who I used to be’

By Will Evans Reveal from The Center for Investigative Reporting May 21, 2018