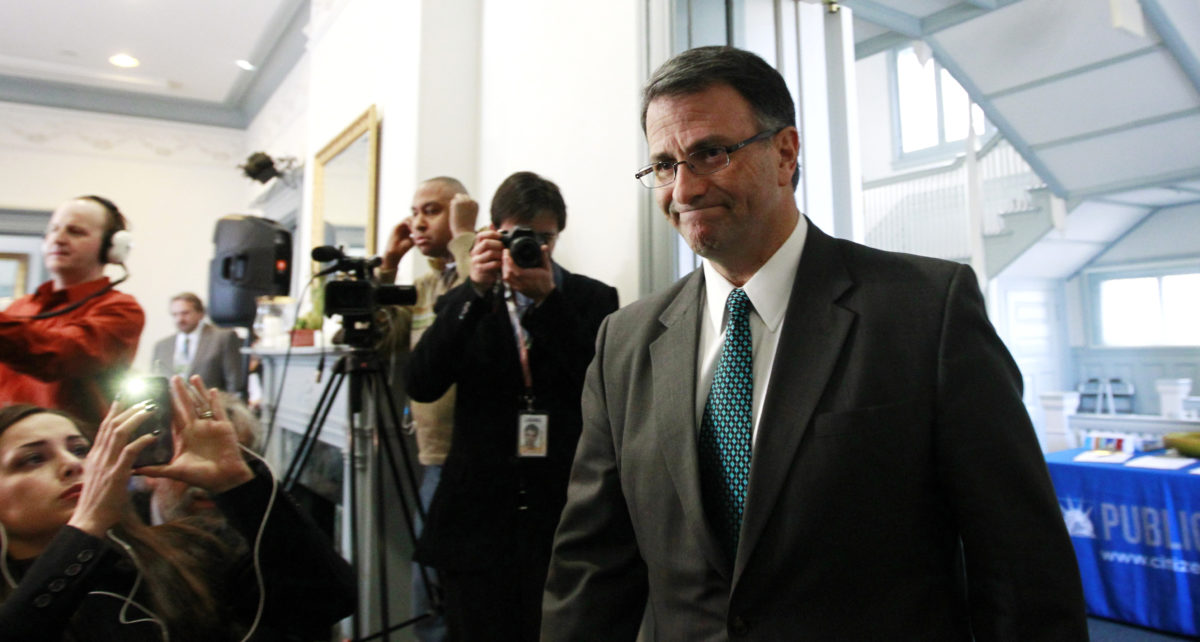 Former lobbyist Jack Abramoff, convicted in 2006 of corruption charges, arrives to speak at Public Citizen, a consumer rights advocacy group, in Washington in 2012.

Patrick Pizzella, President Donald Trump’s nominee for deputy labor secretary, has one endorsement he may not want.

Jack Abramoff, the infamous lobbyist who went to prison for fraud and corruption, called Pizzella “a very ethical person” in an interview with Reveal from The Center for Investigative Reporting.

“I think it shows that the Trump administration is trying to get somebody who’s really experienced, smart and somebody who really knows the issues,” Abramoff, who was released from prison in 2010, told Reveal.

Pizzella worked on Abramoff’s team in the 1990s, lobbying Congress to keep the Northern Mariana Islands, a U.S. commonwealth, exempt from federal labor and immigration laws.

That could come up at Pizzella’s Senate confirmation hearing Thursday. His work with Abramoff has drawn criticism, but supporters told Bloomberg BNA that he shouldn’t be seen as guilty by association or blamed for advocating for a client. Abramoff agreed. “He never did anything inappropriately ever,” he said. “He was a very careful person.”

Pizzella never was implicated in Abramoff’s criminal activity. Pizzella went on to serve as assistant labor secretary for administration and management under President George W. Bush and was nominated by President Barack Obama to a Republican seat on the Federal Labor Relations Authority.

Back in the 1990s, the Clinton administration was pushing for stronger labor and immigration laws on the Northern Mariana Islands, telling Congress that the commonwealth had used its local control for “the massive importation of low-paid indentured alien workers.”

There was a “maximum” wage of $3.05 per hour for foreign workers, and some were subjected to “payless paydays,” in which employers didn’t pay at all, stated one report to Congress.

“Many workers are virtually prisoners, confined to their barracks during non-working hours,” it said. Yet, garment manufacturing plants on the islands could label their clothes as “Made in the USA.”

Abramoff and his team, including Pizzella, were hired by the commonwealth to push back.

“They had local control of immigration and minimum wage, and Congress was trying to take it away from them, and we fought to preserve it,” Abramoff said. “We were successful while we worked with them.”

Abramoff and Pizzella brought members of Congress to the islands to see that reports of inhumane labor conditions were “lies,” he said. “They just saw that this was nonsense,” he said.

One of Abramoff’s trips brought Rep. Tom DeLay, R-Texas – who later became the House majority leader – to the islands, where he praised government officials and factory owners at a party. In a secret recording, a human rights investigator caught one factory owner bragging that DeLay had promised to kill reform legislation.

The commonwealth ended up losing the loophole later, during the Bush administration.

Abramoff was once a powerful and flamboyant figure who came to symbolize everything that was corrupt in Washington. He admitted to making millions by taking kickbacks and defrauding Native American tribes that were his clients. Abramoff also acknowledged bribing public officials with gifts, meals and trips, including a luxury golf junket to Scotland.

He received a reduced prison term for cooperating with prosecutors, helping to convict several officials, including former Rep. Bob Ney, R-Ohio. Since leaving prison, Abramoff has cast himself as a reformer, telling Reveal that he was working on “anti-corruption stuff … to end the ability of lobbyists to use money to influence politicians.”

By Will Evans Reveal from The Center for Investigative Reporting July 12, 2017