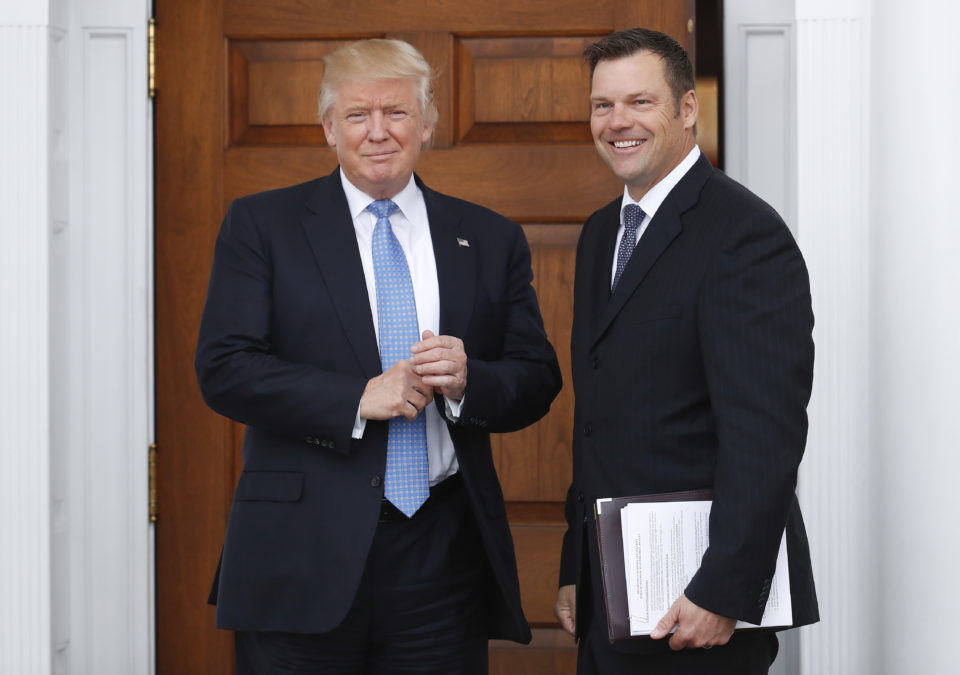 In this Nov. 20, 2016, file photo, Kansas Secretary of State Kris Kobach, right, holds a stack of papers as he meets with then President-elect Donald Trump in Bedminster, N.J.

On Wednesday, President Donald Trump disbanded a White House commission tasked with looking into unsubstantiated allegations of widespread voter fraud. In a statement, the president indicated that the commission’s work would continue through the Department of Homeland Security.

DHS’ involvement may initially seem perplexing, because the agency has traditionally had little to do with administering elections.

However, documents unearthed in a lawsuit against Kansas Secretary of State Kris Kobach, who led the Presidential Advisory Commission on Election Integrity, provide clues about why the project has been moved to DHS. They suggest the Trump administration’s ultimate goal may be to push for citizenship tests for people when they register to vote.

In Kansas, where a similar system is already in place, the citizenship checks have had the effect of preventing approximately 1 in 7 people who attempted to register to vote from getting onto the rolls.

The one item on the list not blacked out falls under the heading “Stop Aliens From Voting” and reads, “Draft Amendments to National Voter Registration Act to promote proof-of-citizenship requirements.”

The second document lists potential changes to law that would more easily allow states to adopt citizenship checks similar to the Kansas system without clearly violating federal law, which limits what information states can require people turn over when registering to vote through the DMV.

For example, the law currently holds that states “may require only the minimum amount of information” necessary to determine eligibility. Kobach’s changes would give states freedom to set their own standards as restrictively as they desire.

The alterations would also explicitly state that nothing in the law should be “construed to prevent a state from requiring documentary proof of citizenship from any applicant.”

Passed in 2011, Kansas’ citizenship check law has disenfranchised people like Lawrence, Kansas, resident Steven Wayne Fish. The suit’s lead plaintiff, Fish attempted to register to vote at the Department of Motor Vehicles in 2014 while renewing his driver’s license. He was unable to do so because he had lost his birth certificate and couldn’t prove his citizenship. Fish was born on a now-shuttered military base in Illinois and has been unable to locate a new copy.

Fish is hardly alone. Many people lack the access to documents that can prove their citizenship, like a birth certificate or passport, often because of financial considerations. Between 2013 and 2016, over 35,000 Kansas residents have been suspended or purged from the registered voter list because of an inability to provide proof of citizenship. That’s about 14 percent of all new registrants.

Investigations into noncitizen voting by Minnesota, New Mexico, North Carolina, Ohio, and Iowa all found cases to be relatively few and far between. In the wake of the 2016 election, The New York Times asked election officials in 49 states for incidents of noncitizens voting and only found two potential cases out of the over 137 million ballots cast.

The citizenship requirements are even stricter than many of the voter ID laws that have captured so much attention in recent years. Under West Virginia’s voter ID law, which goes into effect this year, voters can show a driver’s license, debit card or even a utility bill.

The 1993 National Voter Registration Act, which first allowed people to register at the DMV, was intended to make voter registration simple. Because people already have to verify their identity with official documentation at the DMV to apply for driver’s licenses, it seemed like a perfect fit.

Many people who register to vote at the DMV are primarily there to take care of issues like renewing a driver’s license, which don’t require documentation beyond the expired license, and may not have their birth certificate in hand.

During the debate over the passage of the Voter Registration Act, Congress considered allowing states to require new registrants to provide documented proof of citizenship. However, that idea was ultimately rejected because the criminal penalties for getting caught voting illegally were considered sufficient safeguards to prevent noncitizens from registering to vote. Under U.S. law, noncitizens caught voting illegally can face fines and jail time.

According to an analysis conducted by University of Florida political scientist Michael McDonald, the Kansas citizenship test disproportionately disenfranchises young voters between the ages of 18 and 29, as well as independents.

“Based on the Kansas experiment, imposing a national documentary proof of citizenship requirement would be devastating for voters, particularly for new and young voters whom we should be making every effort to engage,” said Sophia Lakin, a staff attorney on the ACLU’s Voting Rights Project.

Kobach did not turn these documents over without a fight. He argued his memo did not propose any changes to voter eligibility requirements in the National Voter Registration Act, when in fact it did precisely that. The court fined Kobach for operating in bad faith and warned Kobach’s legal team that this type of conduct could have long-term repercussions for their professional reputations. The judge wrote that Kobach “made patently misleading representations to the court about the documents.”

Trump’s voter integrity effort was plagued by controversy even before it was announced. The commission, led by Kobach and Vice President Mike Pence, was inspired by Trump’s assertion that millions of people voted illegally during the 2016 presidential election. That claim, which Trump sourced to the Houston-based group True the Vote, has never been publicly supported by credible evidence.

With at least 19 lawsuits across the country aimed at blocking the commission’s work and an unnamed White House adviser describing the process as a “shit show,” Trump announced it wouldn’t be meeting sometime this month as scheduled. Instead, it would be shutting down.

If citizenship tests are the Trump administration’s true end game, neither the White House commission nor DHS have the authority to unilaterally impose them on the nation’s patchwork of state-run election systems.

Lakin, the ACLU attorney, specifically worried about DHS using its Systematic Alien Verification for Entitlements database as part of its analysis. SAVE was designed to determine whether noncitizens are eligible for federal benefits, not ferret out voter fraud. That’s why there were serious problems when Florida officials used it to identify around 180,000 registered voters who weren’t U.S. citizens in advance of the 2012 election. After further investigation, only 85 noncitizens were ultimately kicked off the state’s voter rolls.

“It’s critically important to recognize the significant limitations of SAVE that make it an extremely dangerous tool for identifying purported noncitizens on the voter rolls,” Lakin said.

DHS officials have remained vague on what shape the agency’s efforts on this front will ultimately take.

“At the President’s direction, the Department continues to work in support of state governments who are responsible for administering elections, with efforts focused on securing elections against those who seek to undermine the election system or its integrity,” DHS Acting Press Secretary Tyler Houlton said in a statement.

Houlton did not respond to questions about whether DHS would be using the SAVE database as part of its analysis, but noted that Kobach is not presently involved in advising the agency on the matter.

By Aaron Sankin Reveal from The Center for Investigative Reporting January 5, 2018