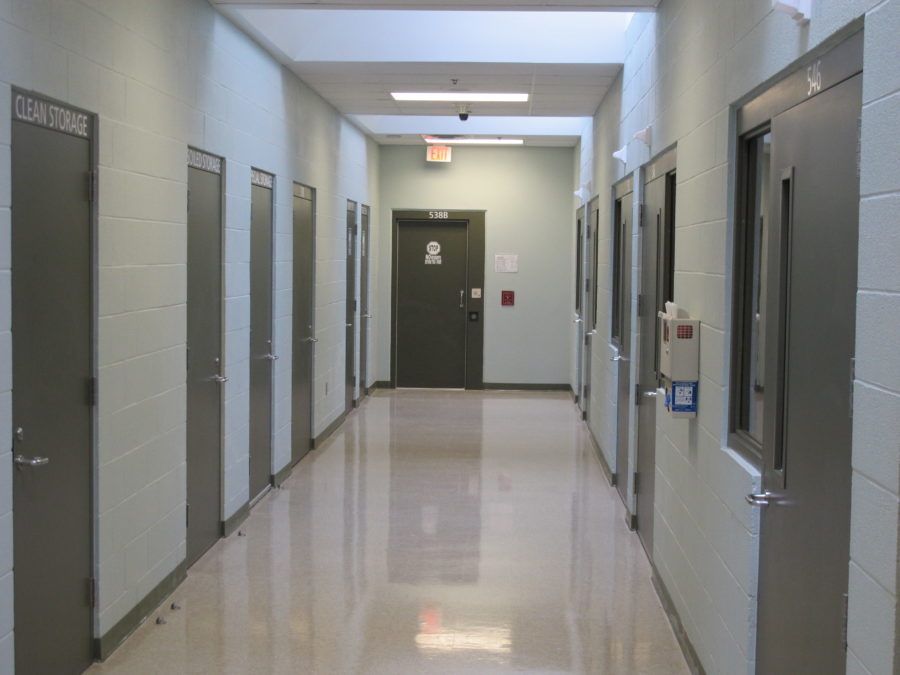 The ICE detention center in Karnes City, Texas, is one of two facilities named in a lawsuit over the treatment of pregnant women in detention.

Editor’s note: A sentence in this story has been updated to remove a reference to general use of ankle monitors.

Lawyers in South Texas say they noticed the change about two months ago: More pregnant women, who normally would have been released quickly, were being held for weeks in detention centers run by U.S. Immigration and Customs Enforcement.

In the past, ICE would release pregnant women after less than a day, until their next appointment with an ICE official or a judge. Now, though, “they’re essentially treated like anyone else,” said Amy Fischer, a policy director at the Refugee and Immigrant Center for Education and Legal Services. The group helps coordinate pro bono legal assistance at the nation’s two largest family detention centers in Dilley and Karnes City, Texas.

Fischer told Reveal from The Center for Investigative Reporting that lawyers there have seen a significant increase in the number of pregnant women being detained by ICE.

“This drastic shift is really appalling, and this new trend is very much that – it’s new, and it’s something we hadn’t seen,” she said.

The trend isn’t limited to South Texas. Today, Fischer’s group joined a handful of others, including the American Immigration Council, Women’s Refugee Commission and ACLU, in a complaint to the Department of Homeland Security, alleging that ICE has been violating its own policy by locking up pregnant women in at least five detention centers nationwide.

Since August 2016, ICE policy has dictated that “absent extraordinary circumstances or the requirement of mandatory detention, pregnant women will generally not be detained.” That memo was signed by Thomas Homan, who was a high-level ICE official under President Barack Obama and is the acting director of ICE under President Donald Trump.

Fischer said she hasn’t seen evidence that ICE has revised its formal policy since then. A February memo from John Kelly, then the homeland security director, called on ICE to parole migrants “sparingly,” but in July, an ICE spokeswoman told a KUOW reporter that the 2016 policy on pregnant women remains in effect.

In response to questions from Reveal, ICE spokeswoman Jennifer Elzea wrote that “the decision to detain or release an individual under conditions of release, such as the agency’s alternatives to detention (ATD) program, is made based upon the individual facts and circumstances of the case,” and that “detention resources are prioritized based upon potential danger to the community and risk of flight.”

Fischer said the trend has been unmistakable.

The complaint details the cases of nine pregnant women detained by ICE for as long as three months. Some learned they were pregnant while in ICE custody, after being raped on their journey from Central America. One woman miscarried while in detention. Most are recent arrivals in the United States, but one woman had been living in Mississippi since 2015, under ICE supervision with an ankle monitor, before she was rearrested and detained in Karnes City.

At Dilley and Karnes City, women typically are held for up to three weeks before their turn comes to meet with an ICE officer to establish asylum claims. In statements included in the complaint, women describe the effects of living in detention and being required to relive their past trauma at the same time that they’re coping with pregnancy.

A 24-year-old Honduran woman called “Laura” in the complaint, who arrived in the U.S. in August, spent more than two weeks in detention in Dilley. She had miscarried a year earlier in Honduras while hiding from gang members who threatened to kill her, according to the complaint. In detention, she began getting headaches, vomiting and feeling dizzy.

“I have been crying a lot and my head always hurts,” she said in a statement. “I have been told that I will have my credible fear interview on Friday, but the idea of having to recount all of the difficult things that have happened to me is very stressful. In my orientation with (U.S. Citizenship and Immigration Services), I have asked if I could be exempt from the interview because of my high-risk pregnancy, but they said I have to do it.”

By Patrick Michels Reveal from The Center for Investigative Reporting September 26, 2017