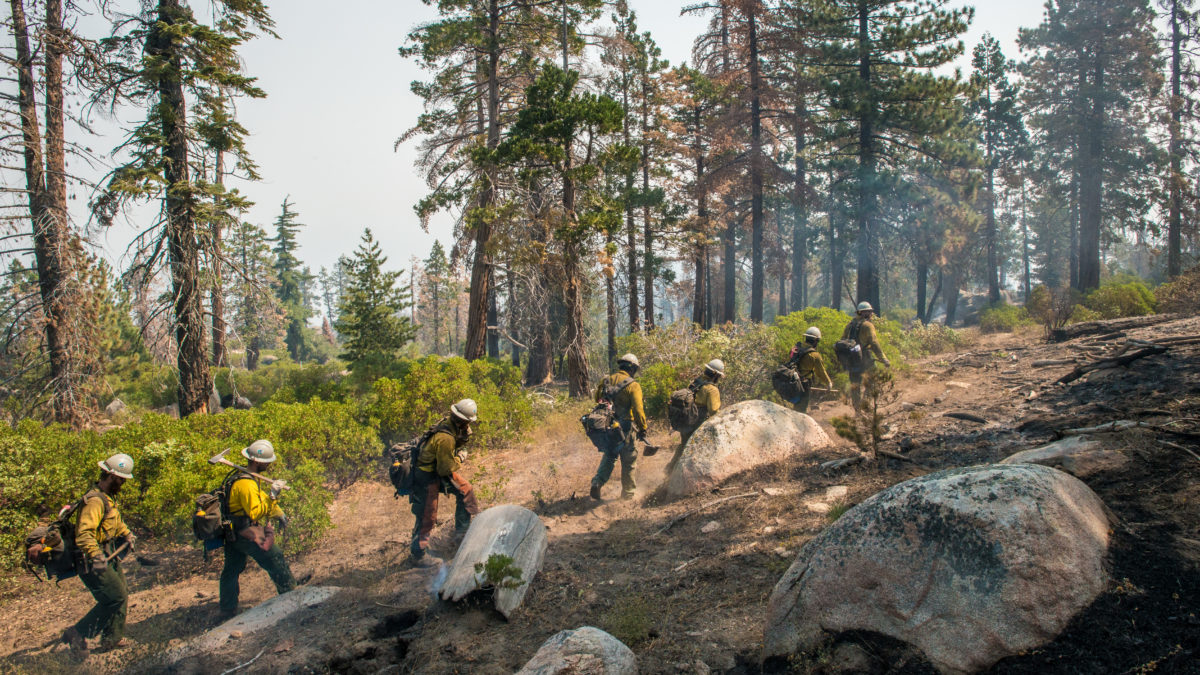 As wildfires rip through parched Southern states, forestry officials have discovered another 36 million dead trees in California since May.

The finding brings the total number of dead trees in the state to more than 102 million since 2010, according to the U.S. Department of Agriculture. This year alone, more than 62 million trees have died, and millions more are expected to die within the coming months and years.

“These dead and dying trees continue to elevate the risk of wildfire, complicate our efforts to respond safely and effectively to fires when they do occur, and pose a host of threats to life and property across California,” Agriculture Secretary Tom Vilsack said in a statement.

The majority of dead trees were found in the southern and central Sierra Nevada. Scientists attribute the massive die-off to warmer conditions, beetle infestations and five years of drought.

The tree die-off is on about 7.7 million acres of forest — a third of all forested land in California..

Ten counties stretching from Placer County near Lake Tahoe to Kern County outside Los Angeles have disaster declarations in place, said Scott McLean, a spokesman the state Department of Forestry and Fire Protection, or CAL FIRE.

Wildfires and loss of timberland are the state’s major economic losses due to drought, according to CAL FIRE.

Portions of the state still are under exceptional drought, according to the U.S Drought Monitor.

McLean said $6 million in state funding has been earmarked to buy equipment to help remove trees, including a mobile sawmill. Another $10 million has been set aside for grants to help local governments remove dead and dying trees near homes.

But work to restore the forests in drought-stricken California is hampered by financial woes, as the U.S. Forest Service continues to dedicate a large chunk of its budget to firefighting, according to the USDA.

The Forest Service spent a record $2.6 billion fighting wildfires in 2015 – more than half its budget. The agency has spent an estimated $1.6 billion so far this year. The funding is pulled directly from the agency’s budget, tying up money spent on forest restoration and the clearing of dead trees or fuels.

“USDA has made restoration work and the removal of excess fuels a top priority, but until Congress passes a permanent fix to the fire budget, we can’t break this cycle of diverting funds away from restoration work to fight the immediate threat of the large unpredictable fires caused by the fuel buildups themselves,” Vilsack said.

Meanwhile, the Forest Service is at its highest preparedness level as it battles a spate of drought-induced wildfires in the southeastern portion of the country, particularly in North Carolina, Kentucky, Tennessee and Georgia. Some areas there have not seen rain for more than three months.

As of  Monday morning, more than 200 fires were burning throughout the South, with nearly 80 aircraft and thousands of firefighters dedicated to battling them, according to the Southern Area Coordination Center.

A recent investigation by Reveal from The Center for Investigative Reporting found that the majority of wildfires occur outside the West, in areas such as the Southeast.

Experts agree that changes in climate will lead to an increase in both wildfire size and frequency.

The Forest Service’s lack of dedicated wildfire funding is felt throughout the United States, Vilsack said. “We must fund wildfire suppression like other natural disasters in the country.”

By Eric Sagara Reveal from The Center for Investigative Reporting November 22, 2016