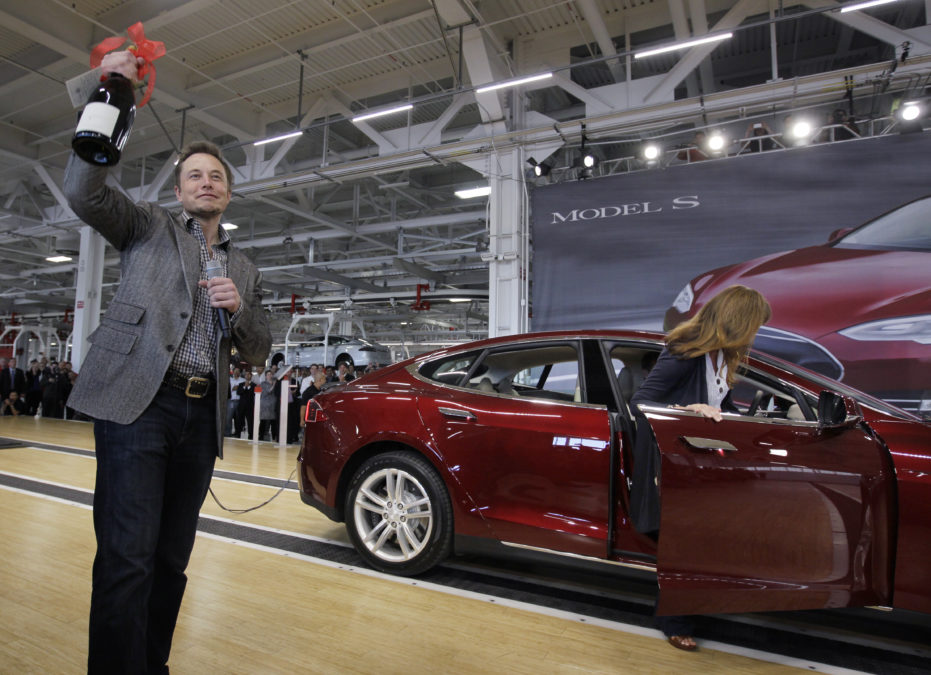 A former Tesla safety director has sued the company, claiming he was fired in retaliation for reporting concerns about workplace safety violations, including chemical exposures and fires. A Reveal investigation found that another former safety official expressed similar concerns last year to CEO Elon Musk.

Elon Musk has a history of making claims about Tesla’s safety record that don’t match the numbers – and the CEO’s doing it again.

Last week, as part of Musk’s Twitter attack on journalistic credibility – and rant about Reveal – he tweeted, “Tesla factory safety has improved every year & is now better than industry avg.”

Pravda was incorporated a year ago. Also, Tesla factory safety has improved every year & is now better than industry avg. Misleading articles refer to Tesla being worse than avg in 2015 when we were just figuring things out.

But as Reveal reported two days before, Tesla’s overall injury rate for 2017 was actually slightly worse than the industry average: Tesla had 6.3 injuries per 100 employees, compared with the average of 6.2.

That’s based on Tesla’s official numbers, which themselves are an undercount because the company hasn’t recorded all of its work injuries as required by law.

And Tesla’s official 2017 rate for serious injuries – those requiring days away from work or job restrictions – was 30 percent higher (meaning worse) than the most recent industry average, according to the company’s official injury report.

So what is Musk tweeting about? When asked, the company said he was referring to Tesla’s safety record so far for 2018. There won’t be an official tally for this year until early next year, and Tesla declined to share any actual numbers, so there’s no way to fact check them.

At about this time last year, Musk also made some impressive claims about Tesla’s injury rate. But the end-of-year numbers didn’t back them up. Let’s take a look.

February 2017: Musk sends an email to employees saying that since Jan. 1, Tesla’s injury rate “is less than half the industry average.”

June 2017: At a shareholder meeting, Musk says (at about four minutes into this video): “So far this year, Tesla is 32 percent below the automotive industry injury rate, and that trend is better and better with each passing month. So I think we’re on track to be less than half the injury rate of the automotive industry and by far better than any other U.S. factory, which I think is something that’s extremely important.”

February 2018: Laurie Shelby – Tesla’s vice president for environment, health and safety – writes on the company blog that the injury rate “is now equivalent to the most recent published industry average.” This is based on the same year-end report we mentioned above, showing Tesla had 722 injuries in 2017. Shelby didn’t mention that the serious injury rate was 30 percent higher than the auto industry average. At the time, Tesla wouldn’t provide the numbers to reporters, so Reveal obtained the report from an employee.

March 2018: In an interview with Reveal, Shelby says the earlier claims of being better than average were “a snapshot in time.” Chief People Officer Gaby Toledano tells Reveal that “we’re at industry average right now.”

April 2018: Reveal reports that Tesla failed to record all work injuries at its Fremont, California, plant, making its injury rate look better than it actually was. Reveal compared internal Tesla injury records and medical records from individual employees with official company injury logs. For instance, we found workers whose injuries were described in Tesla records as work related but labeled “personal medical” issues and others written off as minor incidents requiring only “first aid” when they actually resulted in medical treatment and time off work.

May 2018: Reveal reports that Tesla added 13 injuries from 2017 that had been missing when the company certified its year-end injury report. That raised Tesla’s overall injury rate to 6.3 injuries per 100 workers, just above the 2016 industry average of 6.2. Even with those additions, Reveal found that Tesla still wasn’t counting all injuries.

And that’s when Musk made his claim that Tesla is better than average. He also wrote, “Misleading articles refer to Tesla being worse than avg in 2015 when we were just figuring things out.”

So if Tesla really did come down to 30 percent higher than average for serious injuries in 2017, that would be quite an improvement. The problem is, those records we obtained show Tesla left some injuries off the books. So the true injury rate is worse, and Musk’s tweets notwithstanding, we don’t know by how much.

If you, like Musk, don’t trust the media, go ahead and check the numbers. Take Tesla’s 2017 injury report and plug the number of hours worked (23,194,958.15), the number of injuries causing days away from work (217) and the number of injuries resulting in job restrictions (383) into this rate calculator. Compare it with the automobile manufacturing industry for 2016 (industry code 336111), and you’ll see that Tesla’s DART rate is 5.2, or 30 percent higher than the industry average of 4.

By Will Evans Reveal from The Center for Investigative Reporting June 1, 2018