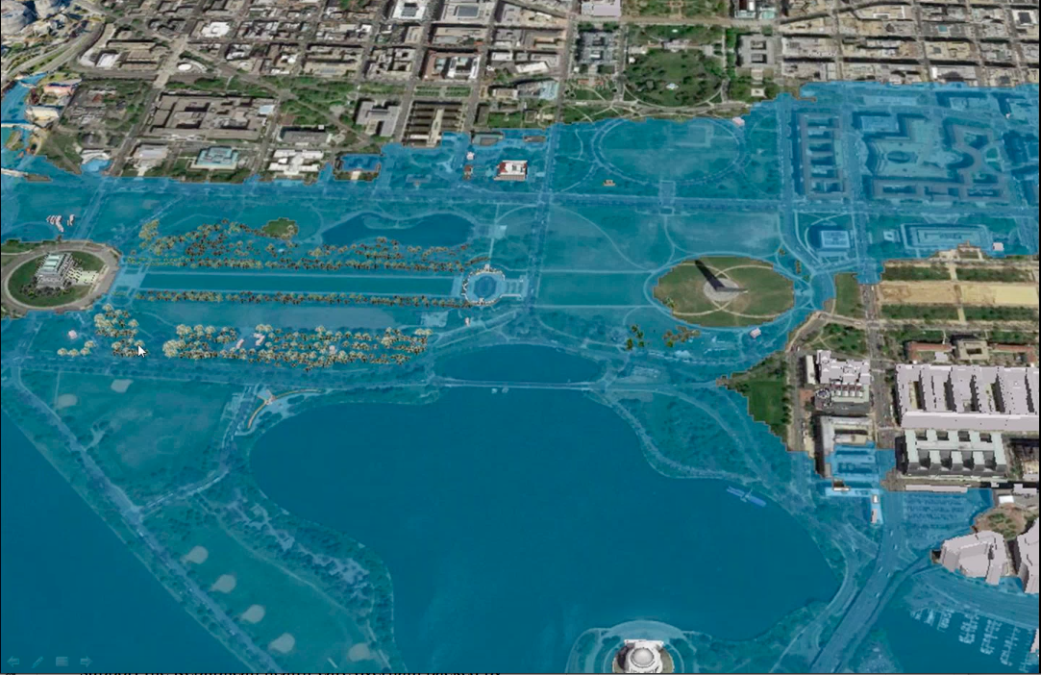 This rendering depicts an aerial view of a flooded National Mall in Washington in 2100 if global emissions rise and a Category 3 hurricane hits the city. It was included in an October 2016 webinar by University of Colorado’s Maria Caffrey, the lead author of the sea level rise report for the National Park Service.

Backing away from attempts at censorship, the National Park Service today released a report charting the risks to national parks from sea level rise and storms.

Drafts of the report obtained earlier this year by Reveal from The Center for Investigative Reporting showed park service officials had deleted every mention of humans causing climate change. But the long-delayed report, published today without fanfare on the agency’s website, restored those references.

The scientific report is designed to help 118 coastal parks plan for protecting natural resources and historic treasures from the changing climate. Maria Caffrey, the study’s lead scientist, said she was “extremely happy” that it was released intact.

“The fight probably destroyed my career with the (National Park Service), but it will be worth it if we can uphold the truth and ensure that scientific integrity of other scientists won’t be challenged so easily in the future,” said Caffrey, a University of Colorado  research assistant who had worked on the report for five years.

The Reveal story, published in April, prompted some Democrats in Congress to seek an investigation of scientific integrity at the park service to see whether Interior Secretary Ryan Zinke or President Donald Trump’s other political appointees are censoring science. Zinke said at a House subcommittee hearing that he had been unaware of the changes, which Reveal uncovered shortly after he told Congress that he never would change a scientific report. The Interior Department’s office of inspector general has launched an initial review, according to Nancy DiPaolo, the office’s director of external affairs.

The controversy reflects a broader challenge for scientists who work for and with the federal government today because of the Trump administration’s attitude toward science, particularly related to climate change. When Caffrey resisted the editing of the report, she said National Park Service officials warned her that it would not be released if she refused to accept the deletions or that it might be released in an edited form without her name on it.

“It’s different kinds of bullying and pressure from different people,” Caffrey said. “After awhile, it starts to build up, and it becomes an absolute mountain.”

But after Reveal disclosed the attempts at censorship, park service officials agreed to restore Caffrey’s original text. The context about the human role in climate change is important to the findings because it more clearly estimates the extent of the threat under various scenarios: Many parks face more severe flooding if greenhouse gas emissions continue to increase.

Jeffrey Olson, a spokesman for the park service, characterized the editing as a disagreement among authors. Asked why the references were restored, Olson said in an email: “Discussions between authors over report language resulted in agreement over the use of several terms, including climate change and anthropogenic climate change.”

The report originally was drafted in the summer of 2016. Olson said “ongoing deliberation among report authors” contributed to the delay, as well as “multiple rounds of internal and external review to ensure the accuracy and usability of the final product.”

Olson declined to be interviewed, as did the other authors of the report, which was published by the park service with no news releases or social media promotion.

According to the findings, the fate of coastal parks depends on choices people make about reducing greenhouse gas emissions. The report estimates sea level rise under four different climate change scenarios. The report also estimates how much flooding 79 parks would face from storm surges.

Parks in North Carolina’s Outer Banks are facing the greatest sea level rise of any national parks. If greenhouse gas emissions continue to rise, the sea level near Wright Brothers National Memorial is projected to rise 2.7 feet by 2100. But if there is a substantial reduction in greenhouse gases, the increase would be 1.7 feet, according to the report.

“The park may be almost completely flooded if a category 2 or higher hurricane strikes on top of inundation from sea level rise,” the report says.

Large areas of nearby parks, such as Cape Hatteras and Cape Lookout national seashores, are projected to be underwater by 2100 if greenhouse gas emissions keep rising, even without storms. Other parks face the same plight, particularly on the East Coast, including Fire Island National Seashore in New York. Several Civil War forts also face significant flooding.

By Elizabeth Shogren Reveal from The Center for Investigative Reporting May 18, 2018