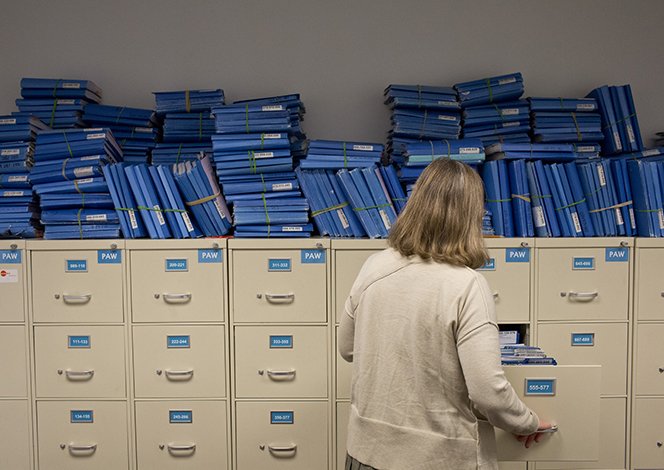 Case files fill the San Francisco Immigration Court. As of April, the U.S. was facing a backlog of 327,406 immigration cases, according to the Justice Department’s Executive Office for Immigration Review.

Racked with a backlog approaching 600,000 cases, the nation’s 58 immigration courts over the last decade have taken longer to rule on deportations, asylum claims and other matters despite hiring more judges and more than doubling their annual budget, according to a new Government Accountability Office report.

Government auditors said that the Justice Department’s Executive Office for Immigration Review, which oversees the immigration court system, has been plagued by inefficiencies, its own foot-dragging in hiring new judges and an increasingly complex and changing legal landscape spurred by recent U.S. Supreme Court decisions and lawsuits brought by immigrants facing deportation.

Between 2006 and 2015 the court system’s caseload more than doubled, growing steadily each year under the Obama administration, while judges completed nearly one-third fewer cases, the report states. The study was conducted at the request of congressional Republicans and Democrats.

That spells bad news for President Donald Trump as he pushes his central political agenda to crack down on illegal immigration and beef up border security. The report underscores that the already bogged-down immigration courts could become a major obstacle to his objective of removing 2 million to 3 million people from the country.

But the good news for immigrants is that judges are ordering deportation for a smaller percentage of immigrants, down to 52 percent in 2015 compared to 77 percent in 2006. Judges are also more frequently ending cases, or ruling in an immigrant’s favor. Overall, judges now decide fewer cases based on the actual merits of arguments than they did a decade ago.

Despite smaller individual caseloads for judges, immigration hearings are being scheduled years into the future, including five years out in at least one court, according to the report. Such delays also put a strain on immigrants’ legal rights by making it more difficult to produce witnesses or documents in their defense, potentially jeopardizing their legitimate claims to avoid deportation.

Sometimes people who may have had a good claim against deportation lost their eligibility over time because their circumstances changed, the report states. In other instances, immigrants who don’t have a solid argument to stay in the country avoid deportation longer because their hearings are delayed.

“The effects of the case backlog are significant and wide-ranging, from some respondents waiting years to have their cases heard to immigration judges being able to spend less time considering cases,” the report concludes, adding that technology could help the court tackle the backlog.

A surge of unaccompanied children arriving at the border starting in 2014 has also exacerbated the challenges faced by immigration judges. Those cases, which usually take longer because of different legal options, are given priority over matters that may be resolved faster.

The median number of days to complete a deportation case, accounting for nearly all of the court system’s caseload between 2006 and 2015, grew 700 percent from 42 days to 336 days.

Auditors concluded that those delays are also due to judges delaying decisions more by continuing cases. Continuances are grouped into about 70 different categories, including more time needed because of illness of an immigrant, their witness or attorney, delays in background investigations or security checks, and insufficient time to complete a hearing.

While apprehensions of border jumpers have ebbed to their lowest point in decades, immigration enforcement jumped 37.6 percent in the first 100 days of the Trump administration compared to the same time period a year before, according to U.S. Immigration and Customs Enforcement. Deportations, however, were down about 12 percent.

Although the Trump administration has called for hiring dozens of additional judges, the mounting caseload could be further intensified by a wave of judges retiring. Almost 40 percent of immigration judges are now eligible for retirement. The office’s budget is about $440 million for the fiscal year ending Sept. 30, up from $199 million in 2005.

The study also explored the question of whether an independent immigration court could better handle deportation cases, appeals, immigration-related discrimination complaints and other matters than the current system run by the Justice Department. The association that represents immigration judges for years has advocated for such independence, but has not persuaded a federal judicial panel to make the change.

Attorney General Jeff Sessions, who earlier this year directed prosecutors to prioritize immigration offenses for prosecution, announced recently the appointment of an acting director to take over the 1,000-person immigration office. James McHenry, who had served as deputy associate attorney general with a focus on immigration litigation, replaces Juan Osuna, who ran the office for much of the Obama administration.

By Andrew Becker Reveal from The Center for Investigative Reporting June 4, 2017