Oklahoma lawmaker on immigrant children: ‘Turn them over to ICE’ 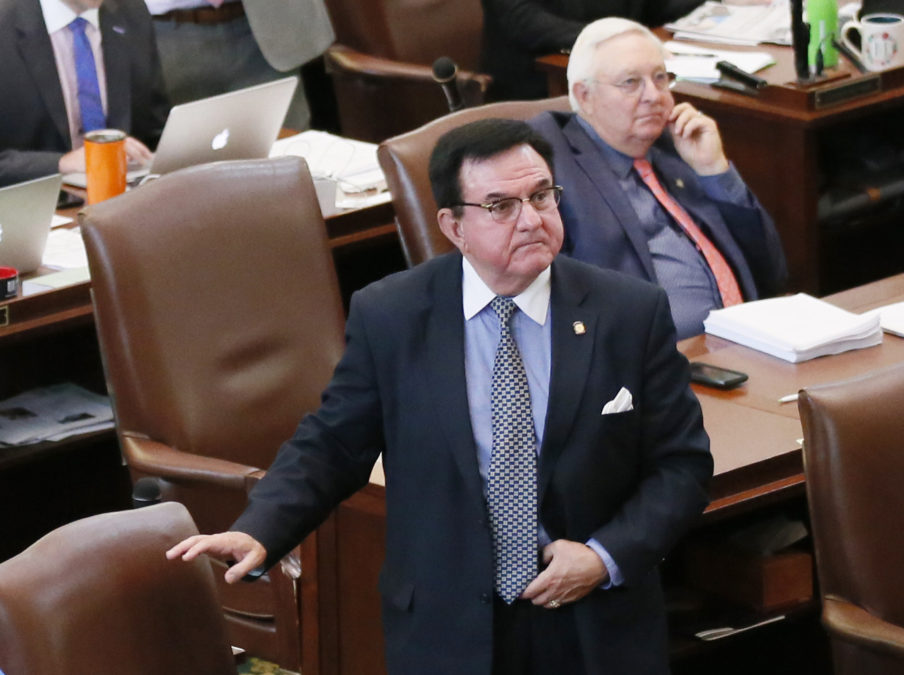 Oklahoma state Rep. Mike Ritze, shown on the House floor in April, said the newly created Republican Platform Caucus believes the state could save $60 million if would identify non-English-speaking students "and then turn them over" to Immigration and Customs Enforcement to determine whether they are U.S. citizens.

A state lawmaker in Oklahoma has suggested deporting children who lack authorization to live in the U.S. as a way to cut millions from the cash-strapped state’s public school budget.

“Identify them and then turn them over to ICE (U.S. Immigration and Customs Enforcement) to see if they truly are citizens,” Ritze said. “And do we really have to educate non-citizens?”

He didn’t appear to address how he’d get around a U.S. Supreme Court ruling affirming that undocumented children have a right to enroll in public schools.

Ritze is on a team of state lawmakers crafting a plan to cut the budget – and even give teachers a pay increase – by strictly implementing the GOP platform. It’s not clear where his 82,000-student figure came from. According to state statistics from October, just under 50,000 English learners are enrolled in public schools.

Ritze, a lawmaker and licensed physician whose statements have made headlines in the past, did not respond to a request for comment.

A spokeswoman for state Rep. Sean Roberts, a co-founder of the caucus, said Ritze’s views aren’t in line with the group’s.

“That was a statement from Rep. Ritze, and those are not the views of the caucus,” she said.

In a statement, Ryan Kiesel, executive director of the ACLU of Oklahoma, said: “This proposal might be laughable if it weren’t made at the expense of real human beings, common decency, and the United States Constitution.”

Ritze isn’t the only one who’s seen an opportunity to cut costs by pulling out undocumented children from public schools. Lawmakers in Texas had similar ideas in 1975, when they passed a law cutting funding for students who couldn’t prove legal status and allowing school districts to deny them entry. An East Texas district adopted a policy charging such students to attend. The U.S. Supreme Court struck down the law in its 1982 ruling Plyler v. Doe.

Today, a Southern California group is organizing to overturn that case.

American Children First began gathering signatures in early April for a ballot measure similar to Mitze’s proposal. The measure would have prohibited undocumented children from enrolling in a San Bernardino County school district and charged tuition for students who have citizenship but whose parents don’t have authorization to be in the country.

Local officials tossed the measure on a technicality – state law doesn’t allow ballot measures in school district elections – but the group’s founder, Joseph Turner, has pledged to keep up his effort.

The notion isn’t new to the Trump era. Turner first raised the issue more than a decade ago, and lawmakers in California, Arizona, Alabama and other states have tried to bar undocumented children from schools.

In 2011, so many school districts required proof of citizenship for enrollment – including around one-fifth of districts in New York – that the U.S. Departments of Education and Justice issued a reminder that such citizenship tests are illegal.

The Trump administration might be less likely to rein in school districts. President Donald Trump already has offered mass deportation as a solution for high crime, unemployment and cost-cutting. (Numerous studies have shown that immigrants are less likely to commit crimes than the general population and that immigration has a positive impact on the economy.)

Kris Kobach, Trump’s pick to lead a new anti-voter fraud commission, drafted the bill in Alabama that would have required schools to check students’ residency. During his years as counsel for the Immigration Reform Law Institute, Kobach drafted some of the best-known anti-immigrant bills of the past decade, including Arizona’s Senate Bill 1070.

The institute’s parent organization, the Federation for American Immigration Reform, issued a report last year tying the cost of educating undocumented children to budget shortfalls in Chicago and other “sanctuary” cities. The report focuses on the higher cost of educating limited-English students – as a proxy for immigrant students – and suggests that Oklahoma, for instance, could save almost $400 million by keeping them out of school.

Ritze, the Oklahoma lawmaker, suggests that saving even $60 million would make it worthwhile.

And while others have suggested schools perform residency checks, Ritze is proposing – as a cost-cutting measure – that Immigration and Customs Enforcement check the status of every English learner in the state.

While Ritze’s proposal and others like it are almost certainly unconstitutional, they do spread the sort of fears that schools have been preparing to fight since Trump became president.

Early anecdotes suggest that students already are staying home to avoid putting themselves or their parents at risk. An Obama-era memo prohibits Immigration and Customs Enforcement from carrying out raids at schools and other “sensitive locations,” but some school districts and state legislatures are working on their own prohibitions in case Trump reverses the order.

Oklahoma lawmaker on immigrant children: ‘Turn them over to ICE’

By Patrick Michels Reveal from The Center for Investigative Reporting May 12, 2017