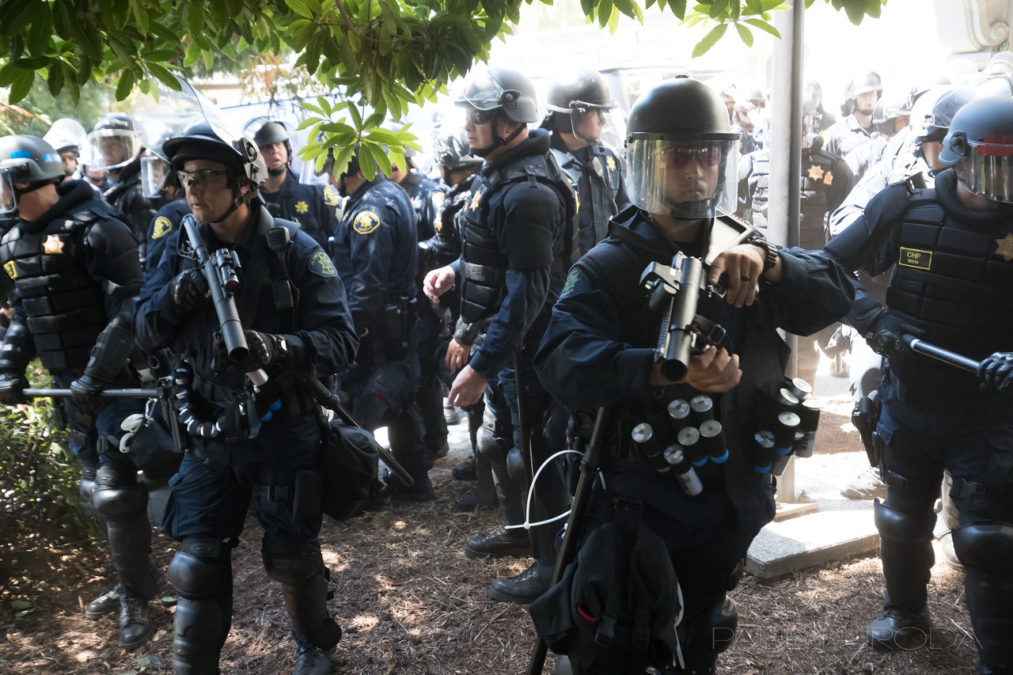 Police in Berkeley appeared poised to deploy tear gas during a rally Sunday but instead retreated from Civic Center Park and stood down. Their actions have been praised and criticized by rally participants and others.

At 1 p.m. Sunday, 1,000 counterprotesters arrived at the police line surrounding a sparsely attended “No to Marxism in America” rally held by right-wing activists in Berkeley’s Civic Center Park.

At the head of the column were perhaps 100 black bloc activists – black-clad leftists, many of them masked. Also known as antifascists or “antifa,” they have been implicated in street fighting and trashing in three violent protests in Berkeley this year.

Tensions rose. The black bloc pushed forward, as if to scale the waist-high barriers that officers put up to secure the park. Alameda County sheriff’s deputies began putting on helmets and gas masks – a sign of trouble to come.

Then, police radios crackled: “Please be advised – we are not deploying,” the dispatcher said.

With that, police pulled back from the park, and the black bloc surged in. Fights and scuffles broke out. Right-wing demonstrators, badly outnumbered, found themselves mobbed by the black-clad protesters. They struggled to break away and flee.

Within the hour, the right-wingers were gone from the park, and the confrontation was over. There had been 13 arrests, two people hospitalized – but none of the prolonged, intense street fighting and looting that marred earlier protests.

Afterward, Berkeley Police Chief Andrew Greenwood defended what he called a strategic decision to pull back from the park and abandon a strict security cordon set up earlier in the day to prevent violence.

“The potential use of force became very problematic,” he told the Associated Press.

If police had deployed tear gas, they could have dispersed the black bloc, but they also would have gassed hundreds of peaceful protesters – including seniors and children – who had marched over from a “Say No to Hate” rally at nearby Ohlone Park.

“There was no need for a confrontation over a grass patch,” the police chief said.

That was cold comfort for the right-wing protesters, who never numbered more than a few dozen, and who found themselves surrounded by angry leftists after the police pulled back.

Joey Gibson, organizer of Saturday’s aborted “Patriot Prayer” protest in San Francisco, turned up in Berkeley just as the police were withdrawing; he was punched several times, pepper sprayed and chased by the black bloc until he retreated behind police lines. Officers set off smoke grenades to drive the leftists back, separating Gibson from protesters. But some Patriot Prayer supporters criticized police for not responding quickly enough.

At about the same time, in what became perhaps the most memorable video of the protest, Reveal host Al Letson intervened to protect a right-wing demonstrator being assaulted by a group of black bloc demonstrators. Al Letson shields a demonstrator from attacks at a protest in Berkeley Sunday. Credit: Shane Bauer

“I was scared they were going to kill him,” Letson said. “So the only thing I could think was I wanted to get on top of him to protect him.”

Around the country, the right wing was deeply critical of the Berkeley police.

“Finally, as if by accident, the @washingtonpost breaks down & admits the truth about where the violence is coming from,” he wrote.

D’Souza’s tweet was retweeted by President Donald Trump, who previously criticized “both sides” for violence at a rally that turned deadly in Charlottesville.

A spokesman for Showing Up for Racial Justice, organizers of the Ohlone Park rally, said police made the right call by standing down at the park.

“There were moments in front of the park where it looked like BPD was going to use tear gas to engage in mass crowd control,” Jeff Conant said. “That would have caused chaos.”

In the days leading up to the protest, police made it clear they were communicating with protesters. Alameda County Sheriff Greg Ahern said he expected thousands of protesters on both sides, and that organizers had agreed to help keep the peace by staging in separate locations. Police said they planned to control exits and entrances to the park and deploy squads of roving officers to squelch violence and property damage.

“We’re putting our people together in squads and moving the squads from one location to another when we get the sense something’s about to build,” the sheriff told Reveal. “We’ll get there before an event and show a presence.”

With the number of right-wing demonstrators far lower than expected, police at first stuck to that strategy.

They blockaded the park and screened protesters trying to enter at checkpoints: Weapons, masks, even water bottles were confiscated. Once inside the park, police seemed to show zero tolerance for fights and prohibited items.

Mark Misoshnik, 23, of Berkeley was one of the first to be arrested.

His wife was with him. She said he was arrested shortly after he accepted a surgical face mask from another protester.

“It was only because some folks were recording him, and he wanted to avoid being revealed on news outlets,” she said. When he put it on, “within 30 seconds the cops had swarmed us.”

All that changed when the stand-down order came.

Still, police roved in groups and sometimes came to the aid of protesters who were under attack. Several officers carried cameras and appeared to film protesters wearing masks. About 400 law enforcement officers from Berkeley, Oakland, UC Berkeley and Alameda County were present for the event.

“The violence that a small group of protesters engaged in against residents and the police, including throwing smoke bombs, is unacceptable,” he said.

“Faced by extremists who were intent to fight, the Berkeley Police Department made the right call to deescalate the situation,” Arreguin said. “In the end, 13 people were arrested and two taken to the hospital. I regret that people were injured, but am glad that serious violence was averted.”

By Lance Williams and Shoshana Walter Reveal from The Center for Investigative Reporting August 29, 2017