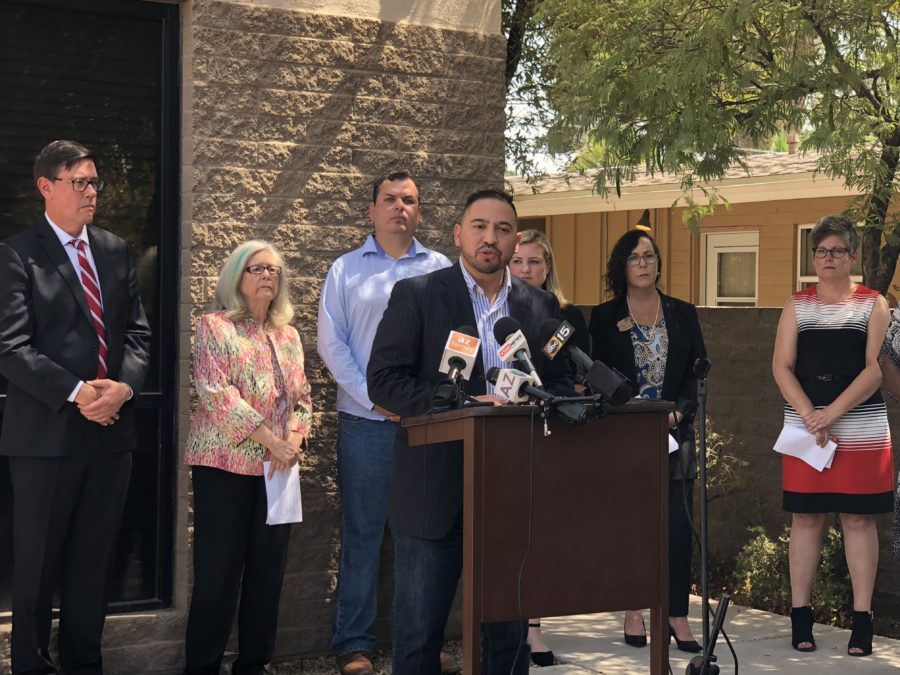 PHOENIX – A vacant office building used to hold immigrant children in central Phoenix became a target of political opponents this week, with the Republican governor and two Democrats hoping to win a primary bid to run against him in November all calling for action in response to an investigation by Reveal.

Gov. Doug Ducey has ordered the Arizona Department of Health Services to monitor MVM Inc., the private defense contractor that held the children. In a statement issued Monday, the Republican governor’s office said: “The governor has been very clear: every child deserves to be properly cared for, and he takes issues around child safety very seriously. … While DHS has not received a formal complaint about this issue, they have proactively assigned staff to visit the site. Additionally, our office has instructed them to monitor this situation closely to ensure child and public safety comes first.”

The announcement followed a news conference staged in front of the office building by state Sen. Steve Farley and other state politicians who called for the facility’s immediate shutdown. They also demanded an investigation of the holding place and urged officials to investigate the well-being of the children who had been held there. The building currently is not licensed by the state as a child care facility although MVM says it does not need a license.

Farley is a candidate in the Democratic primary for governor this August. His campaign staff didn’t take long to react to Ducey’s response.

“It shouldn’t have to take a press conference to get the governor to investigate the well-being of children, but we’re glad he’s finally decided to do something,” said Kelsi Browning, a spokeswoman for Farley for Arizona.

David Garcia, another Democrat who is ahead of Ducey in recent polls, issued a separate statement demanding an investigation into MVM’s treatment of children.

“Trump’s immoral actions – which Ducey has enabled – demand that we rebuild our immigration system top-to-bottom and start by replacing ICE with an immigration system that reflects our American values, values I and so many before have served to protect,” he said.

Separately, Rep. Ruben Gallego, D-Arizona, wrote to the U.S. Department of Homeland Security, asking for an investigation, and to the head of MVM, asking for additional information about how long children were held there, under what conditions and whether the people responsible for them were qualified.

“The decision to use an ill-equipped office building for this purpose calls into question MVM’s ability to competently care for migrant children,” Gallego wrote.

Reveal learned of the issue from concerned neighbors who initially were worried the children were being trafficked. During three weeks in June, neighbors saw dozens of children brought into the building, but no children leave. One neighbor shared videos with Reveal showing children being ushered into the building, one too young to walk. The 3,200-square-foot building, leased by MVM, had no kitchen, a few toilets, no showers and no yard.

A cellphone video shows immigrant children being led into a vacant office building in Phoenix. The defense contractor leasing the building, MVM Inc., claims publicly that it does not operate “shelters or any other type of housing for minors.”Credit: Lianna Dunlap

MVM was awarded an $8 million five-year contract in 2017 to “maintain readiness” and provide “emergency support services” to the Office of Refugee Resettlement, the agency in charge of  housing unaccompanied immigrant children in shelters and other facilities across the country. A statement posted on the company’s website on June 18 states: “we have not and currently do not operate shelters or any other type of housing for minors.”

The company maintains that the building does not qualify as shelter or housing because children were only temporarily held there before they were transported to the airport.

In an email to Reveal contesting the story, MVM spokesman Joe Arabit said: “We sometimes use this building as a temporary waiting area because it is a safe and private place for families and children in between transport. We would never leave these families or children at an airport or other transportation hub to wait for hours.”

Arabit’s email also said the company had prior approval to hold children in the building without a license: “We also reached out to the state of Arizona regarding the use of this building as a temporary waiting area and were told we would not need any licenses or permits for such a use.”

Reveal asked Arabit on Monday to provide details, including the names of state officials who gave approval, but he has not yet responded.

Farley called for Ducey to order the state health department and the Department of Child Safety “to fully inspect the facilities and find out if there are others in Arizona that we don’t know about.”

“This building we are in front of, it’s a private prison for children, children who have been taken from their parents’ arms,” Farley said. “They’ve been kept in a situation which has amounted legally to a child care facility without any licensing from the state.”

Any determination about whether the facility should be licensed to hold children, even temporarily, would be up to the state health department. Cynthia Weiss, a spokeswoman for the state Department of Child Safety, said the agency cannot disclose whether it received complaints about the facility tied to child neglect.

Councilwoman Kate Gallego said she has ordered inspections of the MVM-leased office building from the fire, fire code and planning departments. Phoenix police inspected the location during the weekend and found no children present, she said.

“We won’t stand for unsafe facilities in our city,” said Gallego, who is running for mayor of Phoenix this November.

Gallego noted that the Phoenix Police Department received a report on May 27 to investigate the case of a 17-year-old boy from Honduras who fled while being transferred to the office building. He’s still missing.

“That goes to show this is a poorly thought-out plan. They did not have the necessary tools to keep these children safe, children who should not have been separated from their parents to begin with,” she said.

Phoenix police received a complaint from a neighbor on June 22 to check on the children’s welfare. Police told Reveal they didn’t investigate further after they found out the facility was being operated by a contractor for U.S. Immigration and Customs Enforcement. Sgt. Vincent Lewis, a public information officer with the department, said in an email that police do not perform licensing inspections.

Human rights activists in Arizona said they want more action by state officials about the general treatment of detained immigrants.

Beyond the calls for investigation, some people whose lives have been directly impacted by the nation’s immigration policies remain skeptical about politicians sincerely dealing with immigration issues. Farley, for instance, was joined in the press conference by state lawmakers including Sen. Martin Quezada, Senate Minority Leader Katie Hobbs, Rep. Lela Alston, Rep. Gerae Peten and Sen. Lisa Otondo.

“It’s really upsetting. They all want to be in the picture, they come out to advance politically, but it’s really useless,” said Juan Miguel Cornejo, a Mexican immigrant currently seeking asylum, who spent nine months at the troubled Eloy Detention Center in Arizona. Cornejo added that he was equally disappointed with the Obama administration’s inaction on reports of abuses and deaths in immigrant detention.

It is not clear at this point whether the children held in the Phoenix building were among the estimated 3,000 separated from their parents in June. The young age of several seen entering the building and the timing of their appearance there indicates they could be among that group.

Regardless, mental health experts and advocates say that ICE is adding salt to a wound for a population, many of whom have already experienced trauma in Central America.

Blanca Bertrand, an associate family therapist who specializes in trauma and works with immigrant families, said children’s brains go into a state of fight or flight when they experience danger, which can damage their brain and development. Walking into a substandard facility “triggers complete terror, nothing looks safe for them,” she said.

To send information about immigration issues to Reveal, email border@revealnews.org.

By Valeria Fernández Reveal from The Center for Investigative Reporting July 10, 2018