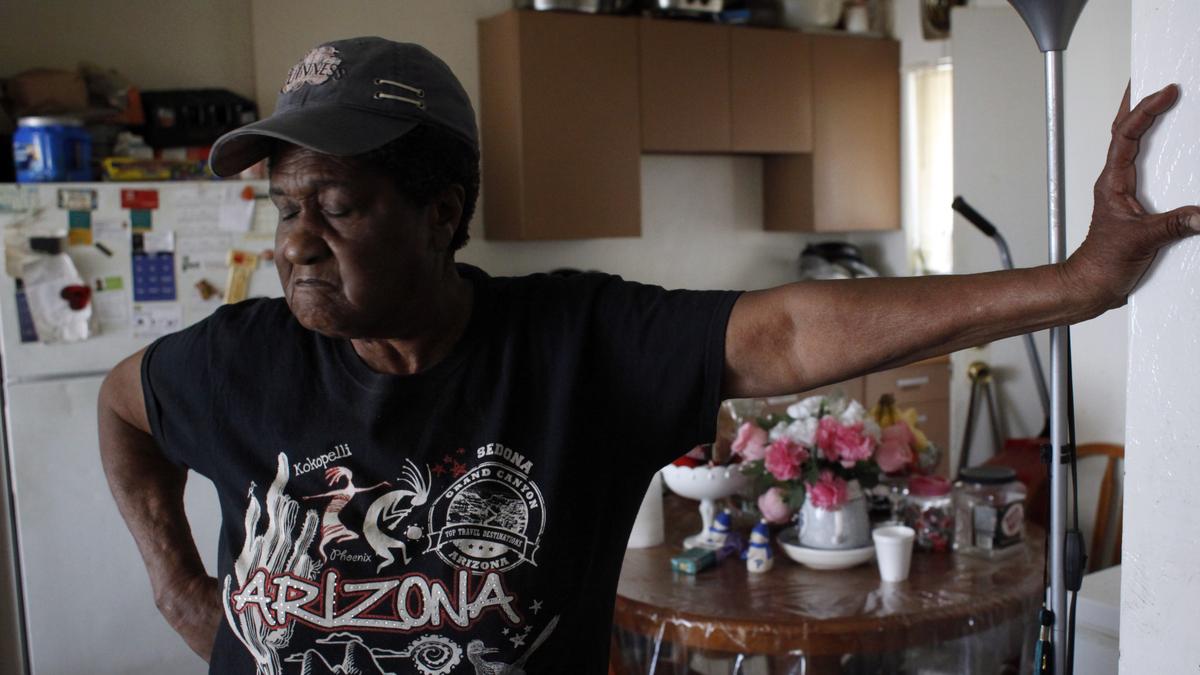 Geneva Eaton says she lost any hope that the Richmond Housing Authority would help with problems at its Hacienda apartment complex, from mouse and cockroach infestations to squatters and long-ignored maintenance needs. “I wanna go someplace else, but I don’t have anywhere else to go,” she said. “They treat us like animals here.”

The Bay Area city of Richmond has agreed to pay $658,000 to nine elderly and disabled public housing tenants who for years lived in a notorious housing project overrun with roaches, mice, squatters and mold.

The proposed legal settlement was a welcome, though painful, vindication for the former residents of the Hacienda housing complex – among them a formerly homeless grandmother, a wheelchair-bound senior who had cycled in and out of hospitals, and a gentleman with a prosthetic leg.

For years, they had filed complaints, stormed City Council meetings and unsuccessfully pleaded with the Richmond Housing Authority to address the substandard living conditions in their units.

Geneva Eaton, 78, one of the plaintiffs in the suit, said the settlement was a long time coming. For years, she lived in an apartment swarming with mice and cockroaches; she was so traumatized by the vermin infestation that she slept with the lights on. She now lives in an apartment in Arizona, but said she still has nightmares about her time in Richmond.

“Sometimes I think about all the stuff I lived through and I get a cold chill on me,” Eaton said. “We lived in these horrible conditions, and the city tried to put it off on the tenants. We asked everyone for help. All they really had to do was clean that place up and they wouldn’t even do that.”

Reveal from The Center for Investigative Reporting first exposed the squalid conditions at Hacienda, along with chronic mismanagement by the Richmond Housing Authority, in 2014.

Building inspections showed that half of Hacienda’s apartments were infested with roaches and almost a fifth of them had mold. Hacienda’s sixth floor sat vacant for years due to roof leaks so severe that stalactites grew from the overhead walkway and caused water to seep through the ceilings in units below.

After Reveal’s stories, the head of the housing authority admitted that the apartment complex was uninhabitable. But it took almost two years for the cash-strapped agency to secure funding and evacuate the last of the residents from the building.

The former residents sued the city and the Richmond Housing Authority in 2015, calling the city “one of the biggest slumlords in Contra Costa County.” The tenants claimed the city breached its contract and created a public nuisance by failing to provide safe and sanitary housing. They sought retroactive rent rebates, along with damages for emotional distress and personal injury.

The suit detailed a litany of problems in the complex: mold, vermin, faulty elevators and lax security – including a broken gate – that allowed drug dealers and prostitutes to “run amuck.”

“The people who live in the Hacienda were on the right side of justice, and the Housing Authority and city were not,” said Mister Phillips, one of the attorneys representing the tenants. “The city needs to know that they can’t treat people any old kind of way because they’re poor.”

In previous interviews with Reveal, the city blamed the poor conditions at Hacienda on a lack of staff and inadequate federal funding from the U.S. Department of Housing and Urban Development.

The proposed settlement money will be split among the nine former residents, after attorney’s fees. The residents could receive a check within the next several months, according to their attorneys.

“We are very happy for these clients, who have been through hell,” said Randy Strauss, one of the attorneys representing the former tenants. “They’re universally thrilled to be finally vindicated for standing up for their rights.”

The immediate future of the Hacienda building is unclear. The six-story complex, constructed in 1966, needs major repairs and upgrades. But redevelopment plans have stalled. The housing authority entered into an agreement with a nonprofit developer, Mercy Housing, to make an estimated $25 million in repairs, but those renovations have not yet begun.

While the building sits vacant, it has become a magnet for squatters and criminal activity. As a result, the housing authority is paying a security firm at least $40,000 a month to guard the empty building.

By Amy Julia Harris Reveal from The Center for Investigative Reporting January 24, 2019