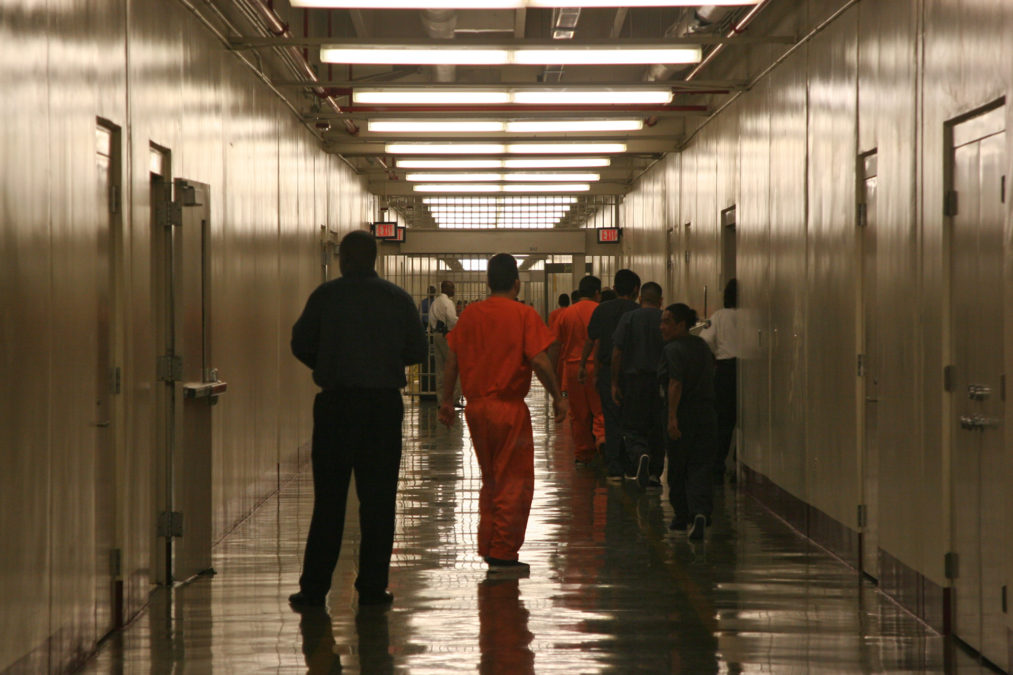 A detainee at Stewart Detention Center in Lumpkin, Ga., leaves the cafeteria after lunch. The all-male federal detention center is operated on contract by CoreCivic, a private corrections company.

U.S. Rep. John Lewis is calling for more oversight over immigration enforcement and detention, citing reports including an investigation by Reveal from The Center for Investigative Reporting and Atlanta NPR station WABE.

In a letter to several Democratic members of Congress this week, Lewis, a Georgia Democrat, called on fellow members of Congress to “end an unjust detention system that sends immigrants far from their families and friends, subordinates their well-being to the profit of others, and strips them of their rights.”

Lewis wrote that Congress must “safeguard living and working conditions for detained immigrants,” citing reports about conditions in immigration detention centers in Georgia.

Reveal and WABE obtained federal records showing that the Stewart Detention Center in south Georgia has struggled with staffing shortages and an influx of drugs in the nearly 2,000-bed prison, operated by the private corrections company CoreCivic.

Two detainees who were being held at Stewart died within the same 12-month period. Jean Jimenez-Joseph, a 27-year-old from Panama, hanged himself with a bedsheet in May 2017 while in solitary confinement. Yulio Castro-Garrido, a 33-year-old from Cuba, died in January after officials diagnosed him with pneumonia.

Another CoreCivic employee said the facility has a shortage of detention officers, “which makes it dangerous for the (detention officers) and the detainees,” and “housing units are understaffed for the number of detainees on the units at the time,” the inspectors wrote.

The Department of Homeland Security inspector general’s office also identified a shortage in medical staff. According to federal records, U.S. Immigration and Customs Enforcement is responsible for detainees’ medical and mental health care at the facility. According to the inspector, Stewart’s health services administrator noted “chronic shortages of almost all medical staff positions.”

As of February 2017, the facility had no psychiatrists and about 1 in 4 registered nurse positions were vacant.

An ICE supervisor at the center told inspectors that there weren’t enough ICE deportation officers and that there was high turnover. Records show there were 13 unfilled ICE officer positions, and for three years, there was no detention service manager on-site – the person whose job is to ensure that detention centers are safe and humane.

ICE spokesman Bryan Cox said staffing ratios at Stewart were “compliant with agency policy.” However, when asked about the staffing requirements, he said, “The staffing ratio is an internal policy that is not releasable.”

Lewis’ letter said the nation’s detention system “should comply with universal high standards, and there should be no disparity or question in respecting the human dignity and worth of any person.”

Lewis pointed out how the Trump administration’s policies have affected Atlanta. He wrote the region is “among the worst places in America to be undocumented.”

“If we fail to act, Georgia could become an unfortunate model for authorities to emulate across the country,” Lewis wrote.

Lewis cited the surge of immigration arrests of people with no criminal record in ICE’s Atlanta region, which includes Georgia and the Carolinas.

Elly Yu produced this story as a Reveal Investigative Fellow. The fellowship, supported by the W.K. Kellogg Foundation and Democracy Fund, provides journalists of color support and training to create investigative reporting projects in partnership with their news outlets.

By Elly Yu Reveal from The Center for Investigative Reporting June 8, 2018