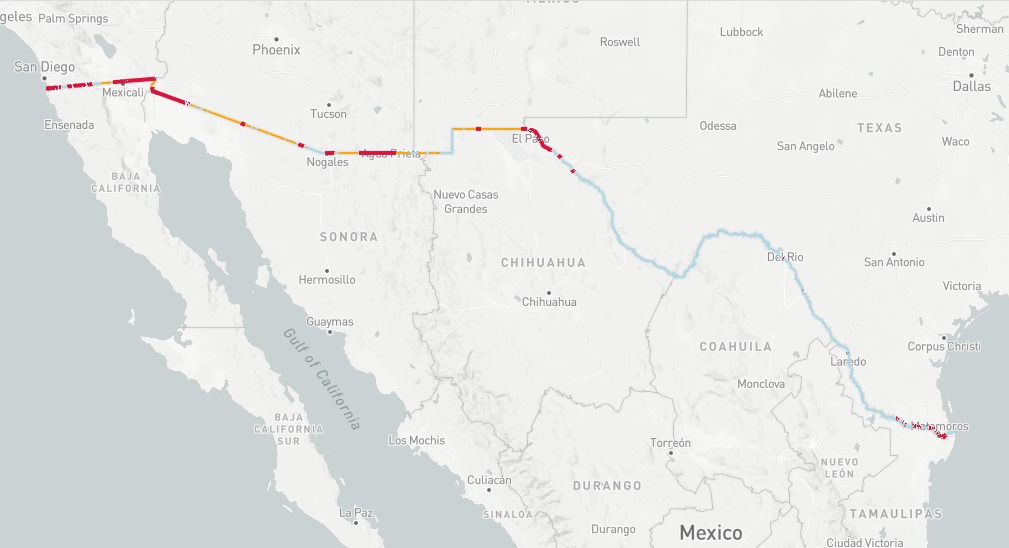 Democrats on the Senate Homeland Security and Governmental Affairs Committee released a report Tuesday criticizing the Trump administration’s plans to build a wall along the U.S.-Mexico border. While the document comes from a partisan perspective, it reveals new details of what federal officials have told Congress they want to do.

The Democrats also released a document that the U.S. Department of Homeland Security presented to the committee, titled, “Building The Wall: The Strategy & Way Forward.” Some basic figures from that presentation have been leaked previously, but the full release provides some new details.

Here are some things we learned from the new documents.

The price is rising

The big number in the Democrats’ calculation is an estimate that building a wall along most of the 2,000-mile U.S.-Mexico border could cost $70 billion or more. That’s a huge increase over an internal U.S. Customs and Border Protection estimate that put the potential cost around $22 billion, though there’s a big caveat to keep in mind.

It’s still unclear how many miles of wall the Trump administration actually wants to build, and that $70 billion estimate is for 1,827 miles of wall – an extremely ambitious version that would require building nearly twice the span as has been built over the past two administrations.

The committee based its 1,827-mile figure on the fact that officials told committee members that they have ruled out only 127 miles of border as being unsuitable for barriers. Those ruled-out areas include large bluffs in Big Bend, Texas; 59 miles of lake; and 35 miles of border that are in the Pacific Ocean and Gulf of Mexico. But the Border Patrol still is evaluating the rest of the border to see it they will request new fencing or walls. It surely will rule out more areas, so it’s unlikely an 1,800-mile fence is coming anytime soon.

Still, at a price of up to $36.6 million per mile, according to Democrats’ extrapolations based on what Customs and Border Protection has asked for in the next few fiscal years, any wall won’t be cheap.

Getting the land to build will be difficult

To date, Customs and Border Protection has spent at least $78 million to obtain land on which to build current fencing, according to government figures. The agency faces another $21 million in potential costs related to ongoing court cases brought by the Justice Department to take private property through eminent domain.

Starting under the administration of George W. Bush, the Justice Department has filed more than 400 condemnation lawsuits to acquire land for fence construction. Nearly 10 years later, more than 90 cases still are unresolved, the report states. Although legal research has yet to begin, border officials told Democrats on the Senate committee that the agency anticipates future land acquisition to take one to two years to complete.

Highest-priority areas will be hardest to build

Border officials say the Rio Grande Valley sector in southeast Texas is their highest priority. In recent years, that sector has becomes the busiest route into the country for border jumpers, primarily from Central America. The Border Patrol wants to build a lot of wall/fence there: 34 miles in fiscal year 2017. It also wants to design and plan for up to 47 additional miles of a “border barrier system” to be built in fiscal year 2018. We don’t know if that’s code for wall, fence or a mix of wall and sensor technology, but it’s a lot of miles. The government told the committee that building in south Texas will be concentrated in three areas: the Border Patrol’s McAllen, Weslaco and Rio Grande City areas of responsibility. The Rio Grande City area currently doesn’t have any border fence, though the Bush administration wanted two segments built there.

But there are at least two big obstacles to building in those areas. First, most of the land in south Texas is owned by private citizens, not the government. That’s a lot of eminent domain cases to process. And it’s hard to see how that process would be completed in the next year or so, especially considering that nearly 100 cases remain unresolved after nearly a decade of litigation.

Second, border officials will have to overcome the Rio Grande itself. The river twists and turns repeatedly and sometimes floods dramatically. To avoid building in the Rio Grande’s floodplain, some sections of the Bush-era fence were built more than a mile from the actual border.

Building a wall in the floodplain would be technically difficult. Without careful planning, a large concrete barrier likely would make flooding much worse. And the people who live in those areas on the U.S. side aren’t the only ones who would have to deal with flooding. If a wall were to push floodwaters onto the other side of the river, it would violate at least one treaty with Mexico.

It’s not clear whether the Trump administration is hoping to dust off the unfinished Bush- and Obama-era plans in south Texas or start from scratch, but there’s no quick and easy path to a lot of wall in the Rio Grande Valley.

We’ve known for a while that government officials were going to build prototypes of border walls – some concrete and some made of anything besides concrete – somewhere in San Diego near the border. We now know that they meant really near the border, about 100 feet away.

Here’s a photo included in the presentation given to the committee: The area pictured is on the far eastern side of Tijuana, just over the border on the U.S. side. Here’s a closer look. On the U.S. side, it’s a pretty wide open, but remote, location. And there’s a layer of older fence on the border itself. Just over that fence on the Mexican side is a mixture of industrial sites and homes, but there are roads going right up to the fence. Why does it matter? Several contractors interested in building a wall prototype have asked about their workers’ security at the build site. The proposed prototype site makes it difficult for potential protesters on the U.S. side to get close, but it will be hard to keep people from getting close on the Mexican side. Border Patrol agents say people in Mexico regularly throw large rocks at them, both in anger and as a distraction. So construction workers may well have reason to keep on their hard hats.

For their part, government officials say putting the prototypes there will allow them to test the prototypes under real-world conditions against older fence designs. (The fence adjacent to the prototype zone gets cut through frequently and needs constant repair, like this section a few miles west.) The Democrats say that to avoid waiting for money from Congress, the administration will get the $15 million it needs to pay for wall prototypes by moving the funds from a video surveillance program within Customs and Border Protection.

Many critics of President Donald Trump’s border wall have said an increased use of sensors and technology would be a better investment than an immovable wall, and even wall supporters have said it can’t work well without a corresponding increase in manpower and technology. So taking money away from sensor technology likely won’t be a popular decision.

By Michael Corey and Andrew Becker Reveal from The Center for Investigative Reporting April 19, 2017