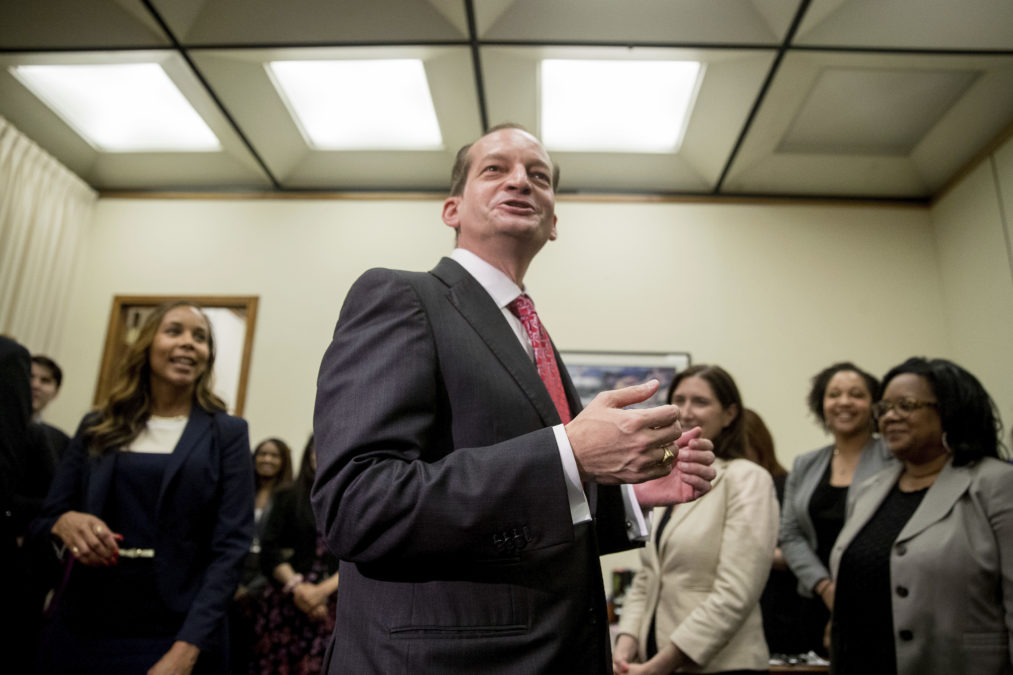 Labor Secretary Alexander Acosta greets employees. The department has shut down part of a website where companies report employee injuries and deaths, blaming a data breach.

Democratic leaders in the Senate have called for a federal investigation into the Labor Department’s refusal to publicize major penalties imposed on dangerous employers and other policy delays.

Sens. Elizabeth Warren and Patty Murray and other lawmakers on Friday called on the agency’s inspector general to investigate why the agency stopped posting press releases about major workplace safety violations after President Donald Trump took office on Jan. 20.

The senators are also seeking the identity of who was responsible for reversing the long-standing practice of publicizing fines of $40,000 or more, which helped the agency pressure companies into compliance, encourage workers to report violations and inform the public about dangerous workplaces.

Of the hundreds of penalties issued by the Occupational Safety and Health Administration since Trump’s inauguration, the agency has posted just one media release. It announced a more than $1.4 million fine following an accident in which two men died in a trench collapse.

The agency’s new cloak of secrecy around penalties was the subject of a recent article by Reveal from The Center for Investigative Reporting. It described how Jordan Barab, the former deputy assistant secretary at OSHA under President Barack Obama, had stepped into the void, publishing a list of companies slapped with hefty penalties since Jan. 18 on his blog.

A Labor Department spokeswoman has not responded to Reveal’s requests for an explanation for the agency’s apparent policy shift.

“DOL did not publicly acknowledge or explain its change of course,” the Democratic senators wrote in their letter to the inspector general. “Given this apparent change of policy, we ask that you review DOL’s decision to cease public notifications of major findings over most of this calendar year.”

The lawmakers say they also want to understand whether lobbyists improperly influenced the decision-making process for the rules.

“The precipitous nature of the delays to these two rules, the lack of public input into these decisions and the failure of DOL to provide any substantive rationalization of the delays, raise questions about the reasons for and process by which these rules were delayed – and about whether the new DOL leadership ever fully intends to implement them,” the senators wrote in the letter.

“Every worker should be able to go to their job without the fear of dangerous substances putting their health at risk.”

In April, the Labor Department delayed enforcement of its silica standard for the construction industry from June 23 to September 23.

The rule, which was the culmination of years of public debate and review, was announced in March 2016. It slashed the permissible exposure limit for crystalline silica to 50 micrograms per cubic meter of air, a fifth of the previous maximum permissible level for construction and half that for other industries.

The National Council for Occupational Safety and Health estimated that the new rule would save 600 lives a year.

Lobbyists for large companies such as the U.S. Chamber of Commerce have assailed Obama-era safety rules, saying they stunt economic growth and job creation.

“The Obama administration’s regulatory madness continues year-round, and it’s particularly clobbering the Cinderellas of our economy – small businesses,” J.D. Harrison, senior director for strategic communications at the U.S. Chamber of Commerce, wrote when the silica rule was finalized in 2016. “It’s time we stop stacking the odds against them with onerous regulations that threaten to do more than knock them out of some tournament; they threaten to knock them out of business, eliminating thousands of jobs in the process.”

The Trump administration has twice delayed a rule for exposure to beryllium that is 10 times lower than the previous standard. Roughly 62,000 workers are exposed to beryllium, a toxic metal that is extremely light, in industries such as defense, shipbuilding and aerospace, according to OSHA’s website.

In March, Rep. Bradley Byrne, R-Ala., chairman of the House Workforce Protections subcommittee, sent a letter to the then-acting Labor Secretary Edward Hugler urging him to delay the beryllium standard.

“An indefinite delay of this rule would be consistent with the administration’s policy of eliminating burdensome regulations,” Byrne wrote.

The rule’s application to the construction and shipbuilding industries, Byrne added, was unsupported by scientific research.

“These two standards are some of the most well-researched standards I’ve seen in my position in occupational medicine,” he said. “They are rock solid.”

This is one reason Barab, OSHA’s former deputy assistant secretary, supports the Democratic senators’ push for an investigation.

“If the Labor Department is putting their energy into rolling back protections then that is very worrisome, especially because of OSHA’s small size and limited reach,” Barab said in a phone interview. “They need to explain why they’re doing all this and what effect it will have on worker safety and health.”

By Jennifer Gollan Reveal from The Center for Investigative Reporting May 20, 2017