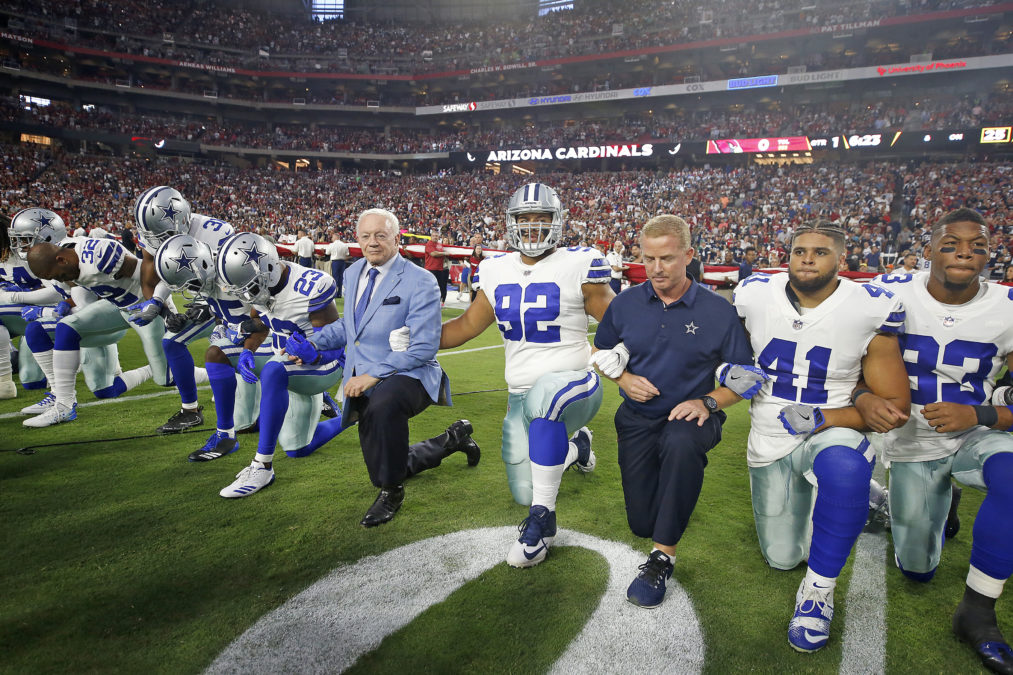 Dallas Cowboys owner Jerry Jones (in jacket) kneels with his team in a show of solidarity before the national anthem at Monday's game.

In this week’s roundup of Trump-related conflicts: sports team owners’ affinity for the president, what post-election price increases by The Trump Organization mean for a key lawsuit and allegations of self-dealing at FEMA.

Reveal from The Center for Investigative Reporting analyzed some $500 million in donations to 16 political committees that spent money last year to put Trump in office. The $14 million contributed by donors associated with pro sports ranked fifth among identifiable interest groups to Trump: more than oil ($8 million), coal ($6 million) and cars ($4 million).

Donations of $1 million apiece came from donors associated with five other NFL teams – the Dallas Cowboys, Jacksonville Jaguars, New England Patriots, Los Angeles Rams and Washington Redskins – as well as from the MLB’s Chicago Cubs. The NFL itself donated $200,000 to Trump’s inaugural committee.

Star athletes make millions but rarely give money to politicians, and that’s true of key figures in the national anthem controversy.

Colin Kaepernick, the onetime San Francisco 49ers quarterback who has been bitterly criticized by Trump for starting the anthem protests, never has given money in a presidential race, according to data from OpenSecrets.org.

Nor has Steph Curry, the Golden State Warriors point guard who didn’t want his championship NBA team to make the customary trip to the White House. Cleveland Cavaliers superstar LeBron James, who called the president a “bum” for his tweet attacking Curry, gave $20,000 to the national Democratic party in 2008 – but nothing since.

James and Curry both endorsed Hillary Clinton for president in 2016.

Soon after Trump was elected, the bar at his Washington hotel jacked up prices: The tab for a whiskey-and-honey cocktail called a John Willett rose by $11, to $29 per drink.

It was the same story at Trump’s exclusive Mar-a-Lago resort in Palm Beach, Florida: Post-election, the initiation fee for a club membership doubled, to $200,000.

Meanwhile, The Trump Organization itself hired a director of diplomatic sales to persuade visiting foreign leaders to book their entourages into suites at a Trump hotel and not a rival chain.

“Why wouldn’t I stay at his hotel blocks from the White House, so I can tell the new president, ‘I love your new hotel!’ ” an Asian diplomat told The Washington Post.

In a hard-fought lawsuit in federal court in New York, the good-government group Citizens for Responsibility and Ethics in Washington has cited these cases as evidence that, in ways large and small, Trump is illegally profiting off his presidency.

Trump, the group contends, is in frequent violation of the Constitution’s emoluments clauses – legal language crafted by the nation’s founders to restrict outside income to the president out of concern about conflicts of interest and bribery.

“Emolument” is an archaic term that usually is defined as a profit or payment. One constitutional clause forbids federal officials from taking emoluments from foreign governments without the approval of Congress. Another bars the president from receiving payments other than his salary from “the United States, or any of them.”

Case law doesn’t provide much to clarify the founders’ meaning. But the good-government group contends that Trump has “openly and notoriously” violated both these provisions. The lawsuit claims the president routinely takes money from foreign and U.S. officials who hope to “feather the president’s nest and display their loyalty to his brand” by patronizing his businesses – even when the prices have risen.

The lawsuit is the first of three that have been filed to challenge Trump on the issue, and a review of recent filings shows that the good-government group has deployed some big legal guns to make its case.

In all, 18 attorneys are working for the plaintiffs, including famed Harvard legal scholar Laurence Tribe and Erwin Chemerinsky, dean of the UC Berkeley law school. The case, filed in January, already has generated hundreds of pages of legal filings, even though it’s not yet set for trial.

Justice Department lawyers who represent Trump say matters should never get that far. In pleadings that reflect what The Economist calls “a narrow reading of the emoluments clause,” Trump’s lawyers have asked Judge George B. Daniels to toss the lawsuits, arguing that the conduct it ascribes to Trump is perfectly legal. A hearing is set for Oct. 18.

Trump’s lawyers claim that the emoluments clauses were written strictly to prevent officials, foreign or domestic, from making quid pro quo payoffs to government officials – the sort of conduct that might also trigger a bribery charge. They say the laws were never intended to prevent presidents from attending to private businesses they owned before they were elected, and they argue that many presidents have done just that.

George Washington sold flour from his gristmill at Mount Vernon in England and Portugal, the government says, while Thomas Jefferson exported his plantation’s tobacco crop to England. But neither president was accused of violating the emoluments clause.

The good-government group has asked the judge to order Trump to sell off his vast holdings. But Trump’s lawyers say the courts don’t have the power to issue such an order.

In a case in which everything else is being litigated, the very meaning of “emolument” also may become an issue. The government relies on a 1774 English dictionary to define the term as “profit arising from an office or employ” – that is, payments obtained from holding public office and not income derived from “private business pursuits by public officials.”

But the plaintiffs filed “statistical and longitudinal analyses” of 40 dictionaries published between 1604 and 1806. Those works generally defined emolument as “profit.”

After Daniel A. Craig withdrew from consideration to be the No. 2 official at the Federal Emergency Management Agency, Trump’s spokeswoman refused to answer questions. Instead, the Department of Homeland Security issued a statement praising the former presidential appointee for his “outstanding background in emergency management.”

Craig’s backstory with FEMA indeed stands out – but not with the meaning the department’s statement intended.

In 2005, when he served as FEMA’s disaster recovery czar, suspicions that he was illegally enriching himself spawned investigations by the FBI and the Department of Homeland Security’s inspector general. The Justice Department ultimately decided not to press criminal charges, and the investigative files were deemed state secrets.

But NBC News managed to view a summary of the investigations’ findings, which implicated Craig in alleged self-dealing and fraud. Craig had pretended to be traveling on FEMA business when he was actually seeking employment with companies competing for lucrative FEMA contracts, according to NBC’s report on the findings.

During the summer of 2005, Craig claimed to be at work when he was interviewing for jobs with Shaw Group and Fluor Corp., two companies with some of the largest contracts to help with post-Hurricane Katrina disaster relief. He even filed vouchers seeking repayment for a government trip to Louisiana, even though he had gone there for a job interview.

Correction: A previous version of this story misstated which federal agency investigated Daniel A. Craig. It was the Department of Homeland Security’s inspector general, along with the FBI.

By Lance Williams and Matt Smith Reveal from The Center for Investigative Reporting September 28, 2017