Standing Rock protesters to the world: ‘Gather like a windstorm’ 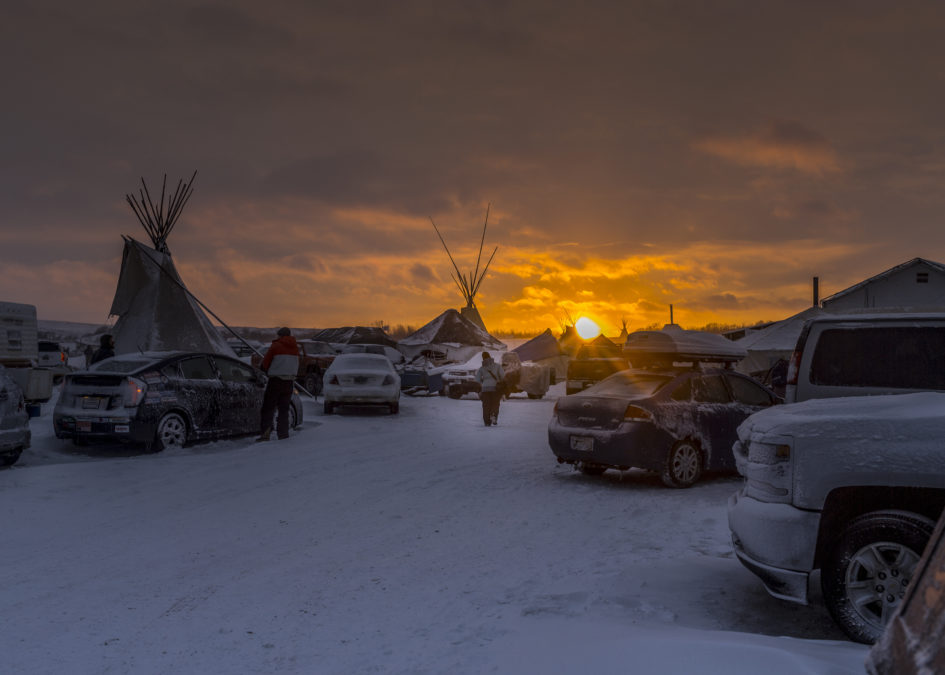 Winter has arrived in Standing Rock at the Oceti Sakowin Camp in North Dakota.

I received the news about the easement like many people: on the internet.

There’s this guy who goes by the name Johnny Dangers on Facebook. He’s been living at the Sacred Stone camp on the Standing Rock reservation for months – one of the protesters or “water protectors” who’s always posting Facebook Live feeds about the Dakota Access Pipeline, its drill pad and the army of police who stand guard over it.

On Tuesday night, he was among the first to see the prepared statement issued by U.S. Sen. John Hoeven of North Dakota.

“Today, the Acting Secretary of the Army Robert Speer informed us that he has directed the Army Corps of Engineers to proceed with the easement needed to complete the Dakota Access Pipeline,” the statement from the Republican senator reads.

I wasn’t surprised by this news. Neither was the Standing Rock Sioux Tribe, which has been fighting for more than a year to stop the crude-oil line from crossing its primary water supply, the Missouri River, and its reservoir, Lake Oahe.

“While this news is disappointing, it is unfortunately not surprising. It is also not a formal issuance of the easement – it is notification that the easement is imminent,” reads a post from Standing Rock’s official Facebook page.

Beneath the post, a flood of comments already has started to pour in, some sounding an alarm.

Reaction from the tribe’s allies – including its legal team – was more pragmatic.

“I think the Twitter-sphere and the Facebook-sphere is lighting up with great anxiety that this is it, and I do think it’s jumping the gun just a bit,” said Jan Hasselman, an attorney with Earthjustice.

On Jan. 20, President Donald Trump’s Inauguration Day, I met with Hasselman on the Standing Rock Sioux reservation. That was also the day the tribe voted to close the network of camps that helped swell the movement – a sprawling community that grew as large as 14,000 people at its peak.

The height of the gathering had happened a month and a half earlier, Dec. 4, when the Department of the Army denied the easement to Energy Transfer Partners, the Texas-based operator behind the $3.8 billion pipeline. That halted construction of the few critical feet needed to complete the line. Jo-Ellen Darcy, assistant secretary of the Army for civil works, also called for an environmental impact statement to review the pipeline’s path around the river.

“The people of Standing Rock achieved something that no one thought could happen, which was to get a pause on this pipeline – get a full and thorough consideration for their treaty rights and environmental risks,” Hasselman said.

Hasselman was one of my first calls Tuesday night. I wanted to know whether he still believed the tribe could overcome what was looking like incredible odds.

The energy companies “have a friendly administration now,” he said. Although Trump spokesmen have said that he sold his investments in Energy Transfer Partners and its partner, Phillips 66, Hasselman said there’s been no evidence that support those statements.

“The law doesn’t allow for the Trump administration to reverse the (environmental impact statement) decision without adequate basis,” he added. “They have to come up with some reason, some justification.”

An emailed statement from the U.S. Army Corps of Engineers said the immediate review of the land easement does not equal final approval.

“The Army has initiated the steps outlined in the January 24th Presidential Directive,” reads the statement from Maj. Gen. Malcolm Frost, an Army spokesman. “These initial steps do not mean the easement has been approved.”

A request for comment from Energy Transfer Partners was not returned. Supporters of the project continued to promote the 1,172-mile pipeline as durable and safe.

“Building new energy infrastructure with the latest safeguards and technology is the safest and most environmentally sound way to move energy from where it is produced to where people need it,” Hoeven’s statement reads.

The tribe has vowed to vigorously pursue legal action. Reaction from the reservation to the latest turn of events spread around the world from Facebook, the virtual megaphone that has helped expand the movement.

“For all of the water protectors around the world, I call on your energy. I call on you to gather like a windstorm!” said an unidentified woman speaking in a live feed from the Sacred Stone camp. “Please! The time to stand with us in solidarity is now.”

Jenni Monet is an independent journalist, blogging for Reveal from Standing Rock.

Standing Rock protesters to the world: ‘Gather like a windstorm’

By Jenni Monet Reveal from The Center for Investigative Reporting February 1, 2017