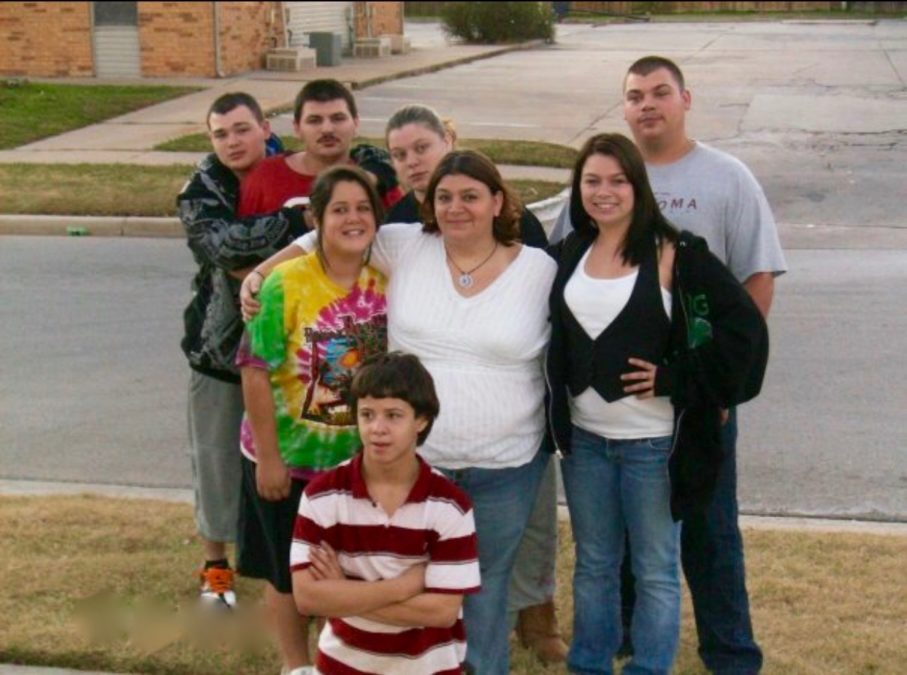 Kendallia Killman, of Norman, Okla., poses with her family. Killman is among the plaintiffs in a federal lawsuit seeking class-action status against a private company the suit claims uses "extortionate" practices to collect court debts. She is the caretaker of her disabled adult son and lives on monthly disability payments of $543.

A newly expanded federal lawsuit seeks class-action status for thousands of Oklahoma residents it says are being extorted by a collections company working for most of the state’s sheriffs and courts.

If successful, the suit could impose sweeping changes on how the state – which ranks No. 1 in locking up women and No. 2 in locking up men – operates and pays for its justice system.

An investigation in September by Reveal from The Center for Investigative Reporting and The Frontier, an Oklahoma-based news site, examined the state’s high female incarceration rate.

The suit names sheriffs in 54 counties, judges and court officials along with Oklahoma-based Aberdeen Enterprizes II. The private, for-profit company contracts with the sheriffs to collect unpaid court fines and fees owed by people charged with traffic offenses, misdemeanors and felonies.

The suit claims that the company orders the arrest and jailing of people too poor to pay their court debts, without legally required court hearings into their ability to pay.

“If an individual explains that she is too poor to pay the lump sum and offers to make periodic payments instead, Aberdeen, Inc. refuses, as a matter of policy, to accept a lesser amount. Aberdeen, Inc. does so because the threat of living under the shadow of an arrest warrant coerces individuals owing debt to sacrifice basic necessities, to beg others for money, and to divert money from means-tested disability payments,” the suit claims.

The lawsuit alleges its seven plaintiffs have been harassed by the company over unpaid court costs and face arrest and jail because they failed to pay what the company requested. The suit claims civil rights violations as well as extortion under the RICO Act.

The company, it says, plays up people’s worst fears: being separated from family.

A company training script referenced in the lawsuit instructs Aberdeen employees to say: “I want to help you get this resolved. I would not want you to get picked up on this warrant and not be there for your kids.”

Smolen, who has won key civil rights cases over the treatment of incarcerated people, said he is challenging the practice because “I don’t like seeing my state reduced to a bad parody of a Charles Dickens novel.”

“We filed this lawsuit to fight back for those who have been marginalized and exploited by these shameful debt-collection practices. We hope to take away the shackles of debt and fear that have plagued our clients for too long.”

Officials at Aberdeen and the Oklahoma Sheriffs’ Association did not respond to requests for comment by Reveal.

Kendallia Killman, one of the plaintiffs in the case, is the caretaker of her disabled adult son and lives on monthly disability payments of $543.

Killman owes about $2,000 in court costs from a 2009 misdemeanor marijuana possession conviction. When the courts turned her case over to Aberdeen, a company employee told Killman she had to pay a large lump sum to avoid arrest.

Killman said she called again several months later, offering to pay what she could afford, but that Aberdeen employee also hung up on her when she made it clear she couldn’t pay a larger amount.

A failure-to-pay warrant remains outstanding and Killman said she lives in constant fear of arrest, preventing her from caring for her family. In addition to her disabled son, she also has a stepdaughter and cares for her mother.

In some cases, people arrested on failure-to-pay warrants are left in jail to “sit out” their court debts, without a hearing or legal counsel, the suit claims. Killman said that’s what she’d have to do if arrested.

Tens of thousands of people in the state could be eligible for damages and could have their warrants recalled if the judge grants class-action status. About 80 percent of the state’s criminal defendants are eligible for public defenders and, in one county alone, 22,000 people are wanted for failure-to-pay court costs.

Most of the state’s court system is funded by criminal defendants themselves through fines and a long list of fees tacked on to even traffic offenses.

The Oklahoma Sheriffs’ Association receives a cut of Aberdeen’s collections and earned more than $825,000 from the arrangement in 2016, the suit claims. An investigation by The Oklahoman found the association reaped millions from its Aberdeen deal, spending funds on travel, a new building, advertising and paid lobbyists. The association hosted Attorney General Jeff Sessions at its meeting in October.

The executive director of the Sheriffs’ Association called 2018 “probably one of the biggest defensive years that this association has ever had. We are going to have to stop a lot of legislation. There will be attempts on cutting fines, fees and costs.”

Ziva Branstetter can be reached at zbranstetter@revealnews.org. Follow her on Twitter:@ZivaBranstetter.

By Ziva Branstetter Reveal from The Center for Investigative Reporting February 7, 2018