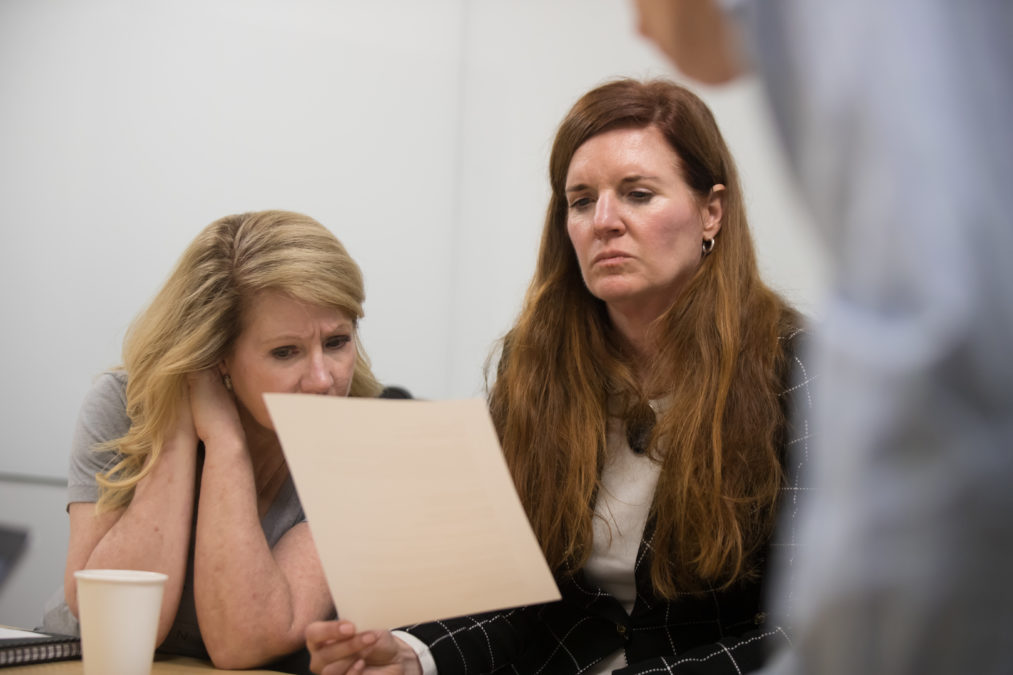 Tesla officials Laurie Shelby (left) and Gaby Toledano read the concerns of then-safety lead Justine White, who emailed CEO Elon Musk’s chief of staff in 2016. “I know what can keep a person up at night regarding safety,” she wrote. “I must tell you that I can't sleep here at Tesla.” Tesla says her concerns were unsubstantiated.

Reveal found that Tesla did not count all of its work injuries as required by law, making its safety record look better than it actually is. Tesla maintains it records injuries accurately.

“Cal/OSHA takes seriously reports of workplace hazards and allegations of employers’ underreporting recordable work-related injuries and illnesses,” said Erika Monterroza, spokeswoman for the state Department of Industrial Relations, which includes the Division of Occupational Safety and Health, known as Cal/OSHA.

Monterroza said “that statement is not made lightly,” but she could not disclose details of the investigation or what triggered it. She said it was not related to a specific industrial accident.

Generally, she said, investigators look at multiple issues, including whether an employer is recording injuries and “things which may have been brought to the attention of the division.”

“They will look at all aspects to determine if the employer is following workplace safety and health regulations,” she said.

Tesla, in a statement, said that it cares deeply about its employees, that the claims prompting the investigation are baseless and that it will cooperate with regulators. It said Cal/OSHA did an investigation regarding Tesla’s injury records last year without finding any violations.

“In fact,” the statement said, “unlike other automakers who in the past have been cited by OSHA for record-keeping violations, we have never in the entire history of our company received a violation for inaccurate or incomplete injury record-keeping.”

Cal/OSHA has cited Tesla for more than 40 health and safety violations since 2013. This year, the agency cited the company for failing to provide employees with effective information and training on chemical hazards in their work areas, as well as failing to “effectively assess the workplace” for chemical hazards.

Tesla is appealing, but Laurie Shelby, the company’s vice president for environment, health and safety, said in a March interview with Reveal that Cal/OSHA raised an important issue about communicating effectively with employees.

“When Cal/OSHA comes in – granted, I would prefer them not to come in – but when they come in … they give us good information,” Shelby said. “We’re like a little city here and trying to make sure that our associates understand all the work that’s being done, and that that information funnels down is very important. … That’s a key point that Cal/OSHA’s made, and they’re spot on.”

Tesla responded to Reveal’s story Monday with a blog post titled, “A Not So Revealing Story.” It said Reveal reporters “have spent several months searching for old, misrepresentative and outright inaccurate information about safety at Tesla’s Fremont factory.”

The post included “a truth table that debunks more of their false claims,” claimed that employees felt harassed by inquiries from reporters and faulted Reveal for interviewing a representative of a worker advocacy organization.

Even before the story published, Tesla called the reporting “an ideologically motivated attack by an extremist organization working directly with union supporters to create a calculated disinformation campaign against Tesla.”

That prompted Jalopnik, the car-themed news site, to write, “Tesla’s War With The Media Is Just Unhinged At This Point.” Tesla has attacked the news media before, including The Wall Street Journal and The Guardian, Jalopnik noted, but “the company’s bizarre fight with the media reached new heights” with the response to Reveal.

Slate, meanwhile, wrote, “The tone the company is taking now borders on hysterical, and it appeals to people’s reflexive mistrust of the media in a way that feels awfully familiar in the Trump era.”

Fast Company noted that “the Elon Musk-founded car company – borrowing a PR tactic from President Trump – is claiming that a venerated journalism nonprofit is fake news. Reveal, however, has the receipts. It cites multiple on-site injuries that should have been recorded by Tesla.”

By Will Evans and Alyssa Jeong Perry Reveal from The Center for Investigative Reporting April 18, 2018