The Hate Report: 3 takeaways from this week’s Charlottesville alt-right arrests 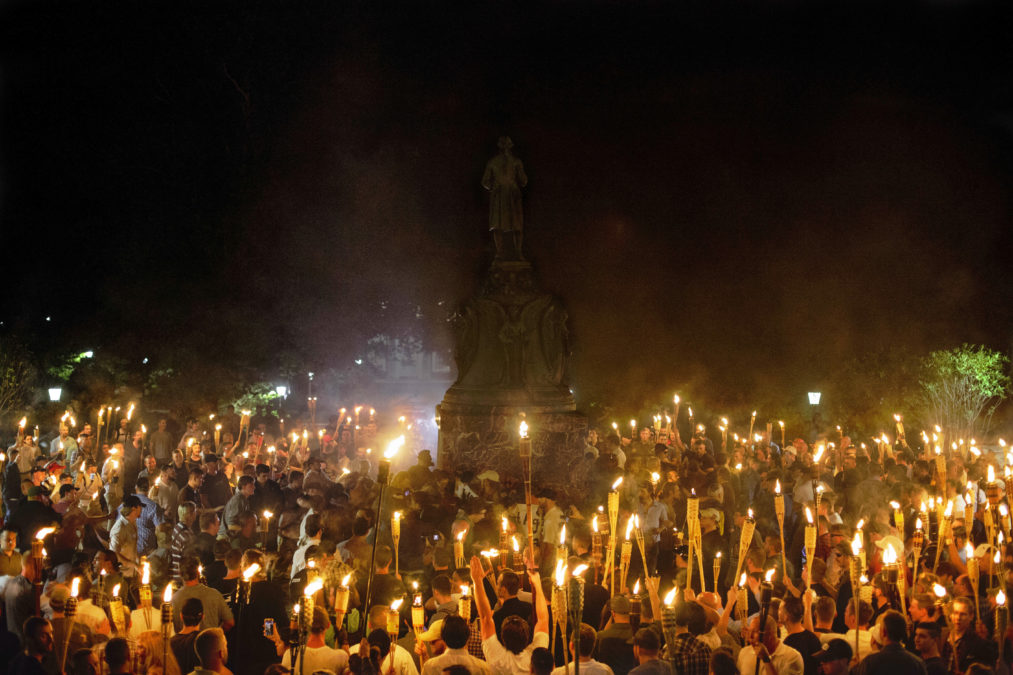 Neo-Nazis, white supremacists and other far-right agitators circle counterprotesters at a statue of Thomas Jefferson after marching through the University of Virginia campus with torches in Charlottesville, Va., on Aug. 11, 2017.

In this week’s roundup: Apple pulls an anti-Semitic app following our reporting, three takeaways from the Charlottesville terrorism case and more.

First, an update to last week’s Hate Report: After we wrote about the anti-kosher app KosChertified? and its corresponding anti-Semitic Twitter feed, Apple pulled the app from its App Store.

The KosChertified? Twitter account tweeted about being removed from the App Store the day after our story ran. The app is still available on Google Play. We’ve reached out to Google to ask whether if the company plans to keep hosting the app.

Thanks again to our volunteer Hate Sleuths, who helped us find this story.

Four white nationalists were arrested this week and charged with traveling from California to Virginia last year with the intent of rioting at the infamous Unite the Right rally in Charlottesville, Virginia.

The men, identified as members or associates of a violent and racist Southern California-based group called the Rise Above Movement, are accused of rioting and attacking protesters in Charlottesville. The Rise Above Movement is a collective of white men who train in martial arts together and travel to attend political demonstrations.

The defendants – Benjamin Drake Daley, Michael Paul Miselis, Thomas Walter Gillen and Cole Evan White – face up to 10 years in prison. But the charges brought against them have implications beyond their group or even their ideology.

Here are three additional takeaways from this week’s big news in hate:

When Donald Trump was elected president, his administration was fixated on Islamic terrorism. That, and the president’s own comments about white nationalists, led to questions about how seriously his government would take the threat of white supremacist terror.

There were reports, for example, that Trump planned to rename a program called “Countering Violent Extremism,” which funds grassroots groups that aim to dissuade would-be terrorists, to “Countering Islamic Extremism.” As we reported last year, the Trump administration also stiffed several domestic anti-terrorism organizations out of millions of dollars they had been promised by Congress under President Barack Obama.

The Charlottesville case shows that federal prosecutors are, at least in some cases, serious about investigating and charging white nationalists. With so many secretive federal terrorism task forces at work across the country, however, it’s hard to draw much of a conclusion from the arrest of four white supremacists by federal investigators.

We’ll be watching to see whether this is an anomaly or whether there will be more investigations and arrests of far-right domestic terrorists, who are statistically far more likely to attack Americans than Islamic terrorists, as our reporting has shown.

One of the most extraordinary things about this week’s arrests was how closely the action mirrored the excellent reporting by ProPublica and Frontline on the Rise Above Movement.

ProPublica and Frontline’s reporting, which identified three of the four defendants, basically laid out the four white supremacists on a silver platter for federal investigators and prosecutors. The news organizations gathered video of the men engaged in violence and compiled social media posts bragging about their activities. U.S. Attorney Thomas T. Cullen acknowledged the role this reporting played at a press conference announcing the arrests.

“The news organization ProPublica did, in my view, a fantastic job in piecing together some of the organized activities that occurred on August 11 and August 12, and the work that they did was certainly reviewed by our office as a starting point to understand a little bit about this particular group,” Cullen said.

That federal investigators are relying on news reports was troubling to Daryl Johnson, who spent six years as the senior domestic terrorism analyst at the Department of Homeland Security.

“That’s very unusual,” he said. “It just goes to show how understaffed and under-resourced task forces are.”

The fact that federal investigators are at work reviewing video, some of it from journalists, to identify domestic terrorists probably should be of concern to another extremist group: violent anti-fascist activists.

We spent time with militant antifa activists from the San Francisco Bay Area last year. In interviews, an activist said he is committed to hunting down Nazis and, if necessary, breaking their bones. Antifa activists in California, Oregon and elsewhere have been filmed damaging property and violently attacking right-wing protesters.

While this week’s arrests targeted white supremacists, it’s important to remember that Trump ultimately controls federal law enforcement. And the president has made clear that he sees antifa protesters as at least just as dangerous as white supremacists.

That’s a belief shared by much of Trump’s base and frequently promoted on Fox News.

This week, the feds went after white supremacists, but federal law enforcement officers and federal prosecutors (many of whom were appointed by Trump) must be aware of the president’s stated views on the antifa.

So we’ll be watching to see which extremist group finds itself in the feds’ crosshairs next.

Ever since the days when African Americans were summarily lynched by racist mobs, nooses have been synonymous with American white supremacy. Today, people still are using nooses as a symbol of repression.

Last month, a white student in Louisiana was arrested and charged with a hate crime after allegedly placing a noose over a black student’s head.

The mother of the victim told local media:

When a teacher asked the white student why he did it, he reportedly replied that he wanted to see how many black boys’ necks he could put it around and get photos.

Meanwhile, a student at the University of South Alabama was suspended last week for hanging nooses from a tree on campus.

The incident is still being investigated and the student has been banned from campus, local media reported. An employee of the company that runs the university cafeteria was also fired for tweeting a joke about the nooses.

The Hate Report: 3 takeaways from this week’s Charlottesville alt-right arrests

By Will Carless Reveal from The Center for Investigative Reporting October 5, 2018