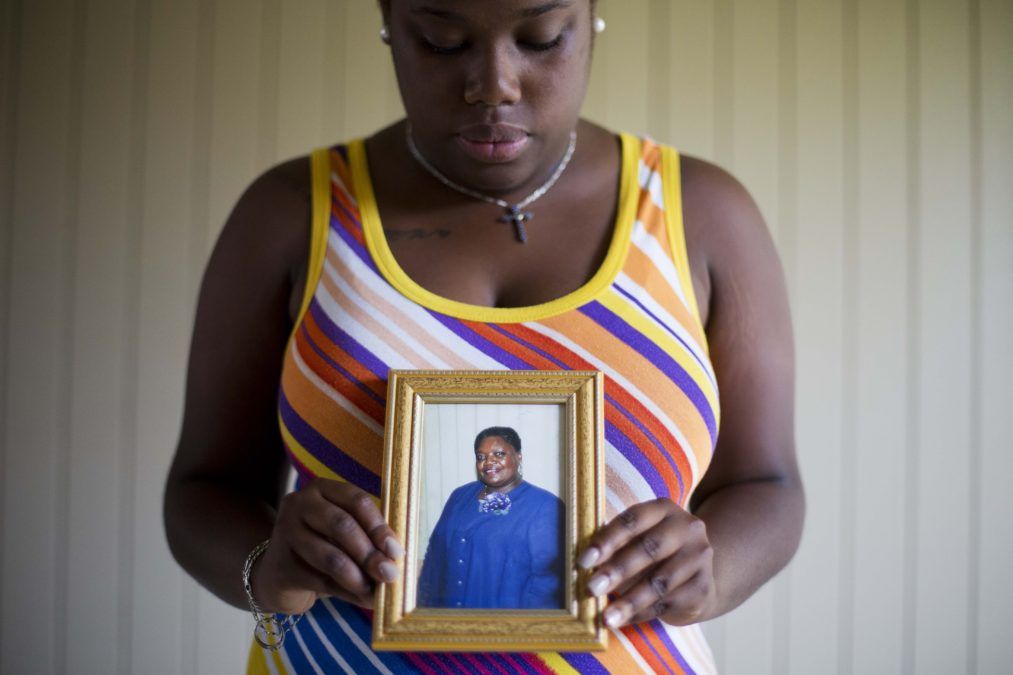 Najee Washington holds a photo of her grandmother Ethel Lance, one of the nine people killed by Dylan Roof in the 2015 shooting at Emanuel AME Church.

Young men who spend a lot of time online posting misogynistic and racist content online have been responsible for 13 fatal attacks on American civilians in the past four years, according to an extensive report put out this week by the Southern Poverty Law Center. Those attacks have left 43 people dead and 67 injured.

The report, The Alt Right Is Killing People, details the similarities in age, gender, philosophy and habits of the 13 attackers, including Dylann Roof, who shot and killed nine people at an African American church in South Carolina in 2015, and Elliot Rodger, who killed seven people on a shooting spree in Isla Vista, California, in 2014.

(T)he movement as it’s known today can largely be traced back to 2012 and 2013 when two major events occurred: the killing of the black teenager Trayvon Martin and the so-called Gamergate controversy where female game developers and journalists were systematically threatened with rape and death.

Both were formative moments for a young generation of far-right activists raised on the internet and who found community on chaotic forums like 4chan and Reddit where the classic tenets of white nationalism – most notably the belief that white identity is under attack by multiculturalism and political correctness – flourish under dizzying layers of toxic irony.

Defining who is alt-right isn’t clear cut. For example, the list of killers includes Jeremy Christian, a mentally unstable young man who was influenced by a pantheon of beliefs including neo-Nazism and neo-paganism. Christian also was a Bernie Sanders supporter and pledged to kill President Donald Trump.

The SPLC report is a significant attempt to group together and label attackers who might otherwise be considered “lone wolves.”

Hate incidents around the country

• A 58-year-old African American man in Scottsdale, Arizona, says a white neighbor yelled racial slurs while stabbing him three times with a knife. Police say the attacker showed signs of mental illness. The victim insists the attack was a hate crime, but Arizona doesn’t have a state hate crime law.

• Two middle-school teachers were attacked in the bathroom of a Sacramento, California, bar. One of the victims said the assault happened after he was overheard talking to his boyfriend on the phone. The attacker reportedly called the teachers names during the assault and law enforcement officials have classified the assault as a hate crime. A crowdfunding campaign for one of the victims, who suffered serious damage to his eye, has raised over $10,000.

• A transgender student at De Anza College in Cupertino, California, was reportedly assaulted two times in the same parking garage in the span of a week. The suspect yelled an anti-gay slur during the second attack. The victim was unable to determine if the same perpetrator was responsible for both beatings.

• Police arrested a trio of North Carolina teens for a multistate vandalism spree. They allegedly blew up a mailbox with a homemade explosive device, slashed tires on cars, spray-painted an upside-down cross on a church van and scrawled swastikas on several vehicles. “These individuals have no respect and regard for anyone’s personal property not even a place of worship. This will not be tolerated,” Madison County Sheriff J.E. Harwood told Fox Carolina.

• Students and community members at an upstate New York high school were barraged with harassment after Breitbart,, The Daily Stormer and 4chan latched on to a controversy over the race of an actor cast in a production of “The Hunchback of Notre Dame.” The show was canceled when a white student was selected for a role that, in the Disney film, was depicted with brown skin. As The New York Times reported, students were sent pictures of swastikas drawn over their faces and one parent discovered her family’s (inaccurate) personal information posted online.

• Sean Libey was driving in the Kendall Yards neighborhood of Spokane, Washington, when he saw a parked car with a racial slur painted on one side and another misogynist slur on the other. He pulled over and snapped a photo. “It made me think that the city didn’t care, even though it was in a nice area,” he said. (Disclosure: Libey is Hate Report co-author Aaron Sankin’s cousin.)

If you witness a hate incident and want to tell us about it, get in touch here.

The judge presiding over the harassment case against Andrew Anglin has ordered the neo-Nazi website leader to reveal his location.

Anglin, who runs The Daily Stormer, was sued by the family of Tanya Gersh, a Jewish real estate agent, after he encouraged his followers to barrage the family with hate. After spending months ducking the case, Anglin’s lawyers eventually asserted that he was living in Cambodia. Gersh’s attorneys argue Angling’s filings suggest he’s more akin to a tourist traveling in the country than someone living there permanently.

Judge Jeremiah Lynch has given Anglin until Feb. 16 to conclusively prove where he’s been living. However, Anglin has insisted that divulging his whereabouts would endanger his personal safety. He has never shown up in court.

Anglin initially wrote in a blog post that he had moved to Nigeria, but we debunked the evidence he put forward supporting his claim.

A report from Georgetown Law charges that all 50 states have laws in place that could be used to prevent white supremacist rallies like the one in Charlottesville, Virginia, that led to the death of one counterprotester and two law enforcement officers.

The report identified four broad categories of laws prohibiting the activities of the Unite the Right rally’s participants.

“Local authorities in all 50 states should know that the law empowers them to restrict paramilitary activity during public rallies, while preserving the rights to free expression and peaceful assembly,” visiting Georgetown Law professor Mary McCord said in a statement.

The New York Times gave a hater a platform, and he fell right off it

White supremacist Elliott Kline, who goes by “Eli Mosley” and helped organize in Charlottesville, was caught by The New York Times lying about his military service.

A Times journalist found podcast recordings of Kline talking about killing Muslims in Iraq. He boasted about having embedded with the Iraqi army and said he enjoyed killing “muds,” a racist term for Arabs.

When the Times asked Kline on camera to outline his military career, he said he had been posted in Kuwait and Iraq, though he was hazy about the details.

It turns out Kline never has been deployed.

The Times got his military records, which show that he was a national guardsman who trained on weekends but never saw the battlefield. Confronted with this news by a reporter from the Times, Kline insisted that he went to Kuwait. “Basically, it’s very similar in the way it works,” he says.

Lying about your military record – known as “stolen valor” – is a big deal among veterans. That Mosley lied about his experience could well reduce his influence.

“This looks really bad,” wrote one user on the 4chan’s white nationalist /pol/ forum, “particularly if the alt-right wants to recruit vets.”

By Will Carless and Aaron Sankin Reveal from The Center for Investigative Reporting February 9, 2018