The Hate Report: Clashes erupt again between alt-right and antifa 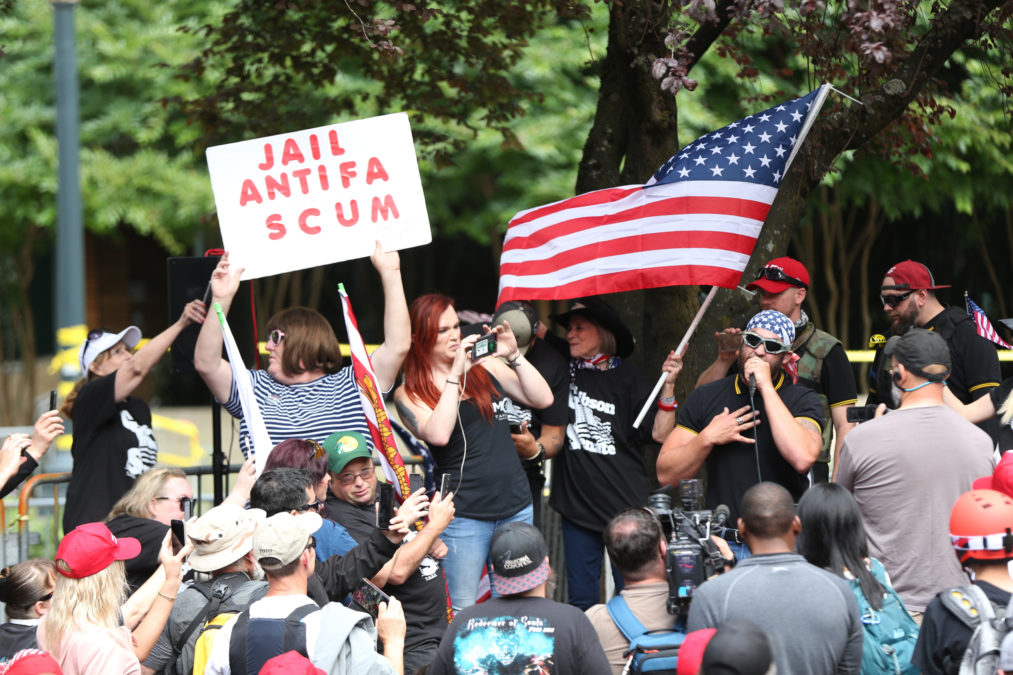 FILE--In this June 30, 2018, file photo, the Patriot Prayer group holds a rally and march in Portland, Ore., amid a protest by anti-fascist groups. Portland is bracing for what could be another round of violent clashes Saturday, Aug. 4, 2018, between a right-wing group holding a rally here and self-described anti-fascist counter-protesters who have pledged to keep Patriot Prayer and other affiliated groups out of this ultra-liberal city.

In this week’s report: Fights flare up again between the alt-right and antifa, why aren’t anti-Native American groups considered hate groups, and hate on the rise internationally.

After months of relative calm, violence erupted on both coasts this week between members of the alt-right and antifa protesters.

A brawl erupted outside the Metropolitan Republican Club a week ago in Manhattan, where Gavin McInnes, founder of the alt-right fight club the Proud Boys, had been giving a speech. A group of Proud Boys, decked out in their trademark black-and-yellow polo shirts, attacked a protester, punching and kicking him. At least one of the attackers shouted a homophobic slur  during the attack.

The New York Police Department arrested three apparent antifa protesters that night. No Proud Boys were arrested, inspiring Democratic lawmakers in New York to call on police clamp down on the group. The department has said it is seeking nine Proud Boys for charges. A spokesman for the department said investigators are still working to identify the assailants.

As Kelly Weill and Will Sommer of the Daily Beast explained this week, mainstream Republicans have increasingly embraced the Proud Boys as they seek to appeal to younger voters:

The day after the fight in New York, antifa protesters again clashed with a right-wing group in Portland, Oregon. In the latest in a string of fights sparked at events organized by the alt-right group Patriot Prayer, antifa and far-right protesters got in a fight outside a bar in downtown Portland. Brawlers used bear spray, fists and batons to beat each other, according to The Oregonian.

Patriot Prayer’s leaders, who claim they are interested solely in promoting free speech, have made a name for themselves by purposefully antagonizing leftist protesters in famously liberal cities like Portland and Berkeley, California.

Portland police revealed this week that Patriot Prayer members were found heavily armed on a rooftop prior to a bigger protest in the summer. Portland Mayor Ted Wheeler said he only learned about the incident this week while being briefed about the most recent violence involving the group. The Oregonian reported:

Asked why the public was not told of the incident sooner, Chief Danielle Outlaw said, “Hindsight is always perfect.”

Last fall, Patriot Prayer’s event in Berkeley sparked violence between the two sides as well. We had an up-close view of the fight and dedicated an entire show to it. In the show, we interviewed Patriot Prayer leader Joey Gibson about his antagonistic tactics.

That’s the question posed by a detailed article in High Country News this week.

Writer Anna V. Smith wonders why groups like Citizens for Equal Rights Alliance, which seeks “to change federal Indian policies that threaten or restrict the individual rights of all citizens living on or near Indian reservations,” aren’t generally accepted as being hate groups despite their record of fighting against Native American rights.

The national group, with board members in Montana, New Mexico, Arizona, California and Washington, has declared that treaties regarding land and water rights are no longer valid, advocated for state rights at the expense of tribal sovereignty, and repeatedly sown distrust between non-Natives and tribal governments on issues like taxation, voter fraud and land use. CERA, which calls tribal sovereignty a “myth,” works to undermine forms of self-determination — foundational issues for tribal nations that have borne the brunt of violent U.S. expansion for centuries.

The author argues that this sounds a lot like other groups that seek to reduce the power held by people of a certain heritage, and points to a July report by the Montana Human Rights Network making the case that anti-American Indian groups should be categorized as hate groups.

Failing to identify anti-American Indian groups as such means they don’t receive the same attention as anti-Latino or anti-black groups, the Montana Human Rights network argues. Native Americans, like other minorities, are often targeted for their ethnicity, so groups that foster anti-Native American sentiment should be recognized as such, the report states.

Hate crime spikes in England, a swastika in Brazil

America isn’t the only place where hate is rising.

England and Wales just saw a huge 40 percent increase in religion-based hate crime, according to figures released by the U.K. government.

Some 52 percent of those crimes were directed at Muslims, according to the Home Office. And the number of reported hate crimes in England and Wales was at an all-time high.

Meanwhile, in Brazil, a young woman wearing a T-shirt critical of the leading candidate for president, far-right former paratrooper Jair Bolsonaro, was allegedly attacked by a group of men who scratched a swastika in her side using a pen-knife.

The Hate Report: Clashes erupt again between alt-right and antifa

By Will Carless Reveal from The Center for Investigative Reporting October 19, 2018