The Hate Report: Police vs. antifa 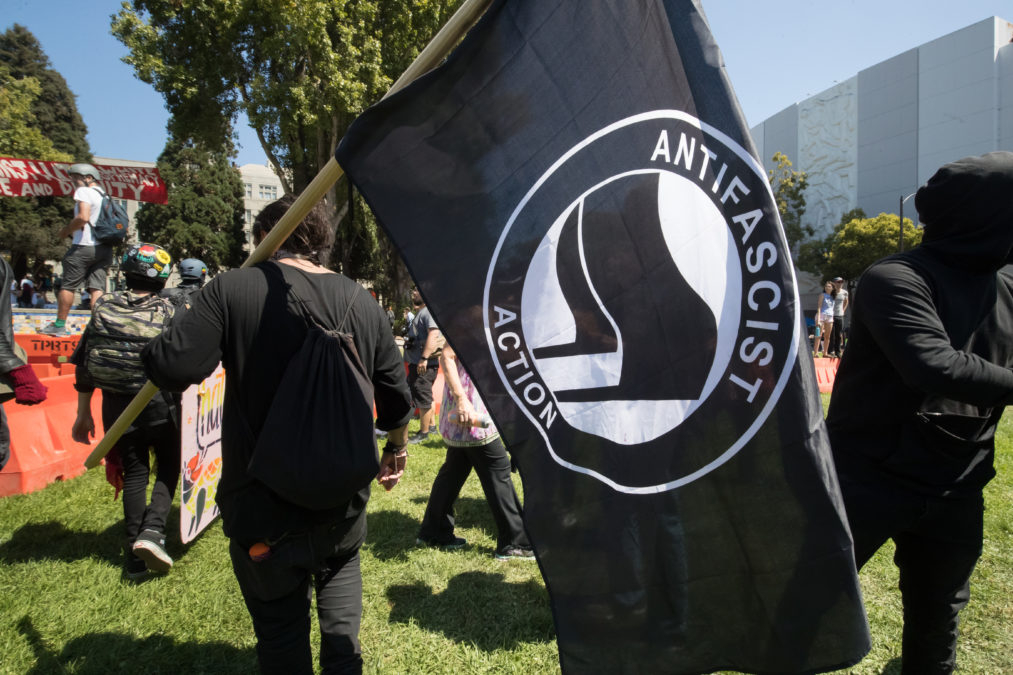 An antifa activist carries a flag of the movement, which features a logo of two flags.

In this week’s roundup: Cops in Louisiana search for antifa with the help of neo-Nazis, Gab is big in Brazil and sometimes OK is not OK.

High-level officials with the Louisiana State Police emailed around a fake list of purported antifa activists that originated on the conspiracy theory website 8Chan and was shared widely by neo-Nazis, according to a lawsuit filed this week on behalf of a New Orleans lawyer.

As BuzzFeed reported last year, a group of trolls spent months creating a sprawling list of the personal information of people on the political left. They scraped sources like a petition condemning the Trump administration and the personal Facebook pages of people associated with the pro-immigrant group By Any Means Necessary, or BAMN. Then they released the document on 8Chan, claiming it was a “full list of antifa members.”

That list was quickly spread on white supremacist and neo-Nazi websites including Stormfront, claims the lawsuit, filed by Harvard Law School lecturer Thomas Frampton on behalf of New Orleans civil rights attorney William Most. And from there it apparently made its way into the hands of Louisiana State Police.

Most is suing to force the Louisiana State Police to release a copy of the document. He learned of the document after seeing it was an attachment in department emails he received in a public records request.

“These citizens have been victimized once by Neo-Nazis; are they now being victimized again by law enforcement?” Most wrote in an email.

The lawsuit echoes recent instances around the country where police departments have been accused of working with white supremacists or of unfairly targeting antifa over competing right-wing groups.

In February, California Highway Patrol officers were found to have coordinated with the white supremacist Traditionalist Workers Party to hunt down members of antifa during a 2016 protest. Emails uncovered by lawyers for anti-racist protesters found that police officers offered to protect a white supremacist rally organizer while seeking the help of racist protesters to identify their antifa opponents.

Last summer, the Berkeley Police Department came under fire for using evidence unearthed on the anonymous online message board 4chan. The site is notorious for spreading malicious conspiracy theories like Pizzagate, often to purposefully stir up controversy.

The evidence these online activists dug up was seized on by Berkeley police, who partly relied on it to arrest Eric Clanton, a 28-year-old college professor who allegedly attacked white supremacists with a bike lock. Clanton, who was charged with four counts of felony assault with a deadly weapon, pleaded no contest to lesser charges last month. He is serving three years of probation.

The Louisiana allegations add fuel to the argument that police departments are targeting antifa activists disproportionately compared to the far-right activists antifa often clash with. Several times over the past year, police departments have been accused of being heavy-handed against peacefully protesting anarchist and antifa protesters while seemingly giving violent far-right-wing protesters a free ride.

Portland police are currently investigating the conduct of officers who confronted counterprotesters during an August protest.

Earlier this month, the ACLU criticized Portland police for targeting left-wing protesters based on their political opinions. “The Portland Police Bureau’s response to protest is completely unacceptable in a free society,” the head of the Oregon branch of the ACLU, David Rogers, said in a statement. “The repeated use of excessive force, and the targeting of demonstrators based on political beliefs are a danger to the First Amendment rights of all people.”

Similar allegations arose after clashes between antifa protesters and Philadelphia police last week. After officers were filmed violently throwing black-clad protesters to the ground and punching them, the police department announced it was investigating the conduct of cops at the protest.

The social network Gab, which is highly popular among white supremacists and neo-Nazis in the United States, is gaining in popularity in another major democratic country: Brazil.

A quick search on Gab shows at least one reason for the site’s popularity: Multiple posts lionize Brazilian presidential candidate Jair Bolsonaro, a conservative politician whom the Intercept’s Glenn Greenwald, who lives in Brazil, has called “the most misogynistic, hateful elected official in the democratic world.”

In Brazil, Bolsonaro is famous for praising the country’s brutal military dictatorship. When the congressman cast his vote to impeach President Dilma Rousseff in 2016, he dedicated his vote to Carlos Alberto Brilhante Ustra, the colonel who headed the Doi-Codi torture unit during the dictatorship era, which tortured Rousseff when she was a political prisoner.

A few years ago, Bolsonaro made headlines after telling a fellow congresswoman (for the second time), “I would not rape you. You don’t merit that.” He has also consistently bad-mouthed non-whites and the LGBTQ community.

Bolsonaro, once considered a fringe candidate, is currently polling second to become the next president of Brazil.

Gab is apparently delighted to be courting Bolsonaro’s supporters, and the site’s official Twitter account regularly tweets to the candidate and links to stories about him.

A guide to the ‘OK’ symbol

Controversy flared up this week after Zina Bash, a former Trump administration adviser, was filmed apparently making the “OK” symbol with her hand during the congressional hearing for Supreme Court justice nominee Brett Kavanaugh.

Most news outlets quickly concluded that Bash, who is of Mexican descent on her mother’s side and whose grandparents were Holocaust survivors, didn’t mean for her hand gesture to connote white supremacy.

However, the OK symbol has previously been connected to white supremacists, and we published a guide to understanding the hand gesture last month. Here’s a quick recap of the four most common possible ways human beings might use the OK gesture in 2018:

Totally innocent: Long before the internet made everything worse, joining one’s index finger and thumb to form a circle simply meant OK as in, everything is alright. The symbol, and its associated emoji, is still used in this way every day across the globe.

The circle game: Apparently there is a popular kids’ game called “the circle game,” in which the goal is to make the OK gesture and trick someone into looking at it. In at least one version of the game, if you can trick someone into looking at the gesture, you get to punch them. You might find this clip from the TV show “Malcolm in the Middle” instructive here. Half of the Hate Report team (Will) had never heard of this, but the other half (Aaron) has been playing this game with his younger brother for decades.

Actual white power: In the wake of the deadly Unite the Right rally in Charlottesville last year, we reported on a trove of online messages leaked from the gaming and social media platform Discord, which Unite the Right organizers used to rally their troops for the Charlottesville event. Those messages included numerous examples of rally participants posting photos of themselves flashing the OK gesture:

Trolling: As BuzzFeed helpfully explained last April, the idea of using the OK sign as a means to “trigger normies” can be traced back to the online message board 4Chan in early 2017.

A post on 4chan’s /pol/ board from Feb. 28, 2017, titled “Operation O-KKK has gained quite a bit of progress” states: “To any who haven’t seen the original thread, our goal is to convince people on twitter that the ‘ok’ hand sign has been co-opted by neo-nazis.”

That plan seems to have worked pretty well.

A previous version of this story misstated the immigration stance of By Any Means Necessary, the name of the lawyer who filed the Louisiana State Police lawsuit, and the relationship of Zina Bash to the Trump administration. BAMN is pro-immigrant, the lawyer is Thomas Frampton and Bash is a former Trump administration adviser.

The Hate Report: Police vs. antifa

By Will Carless Reveal from The Center for Investigative Reporting September 7, 2018