The Hate Report: 4 takeaways from the big annual hate study 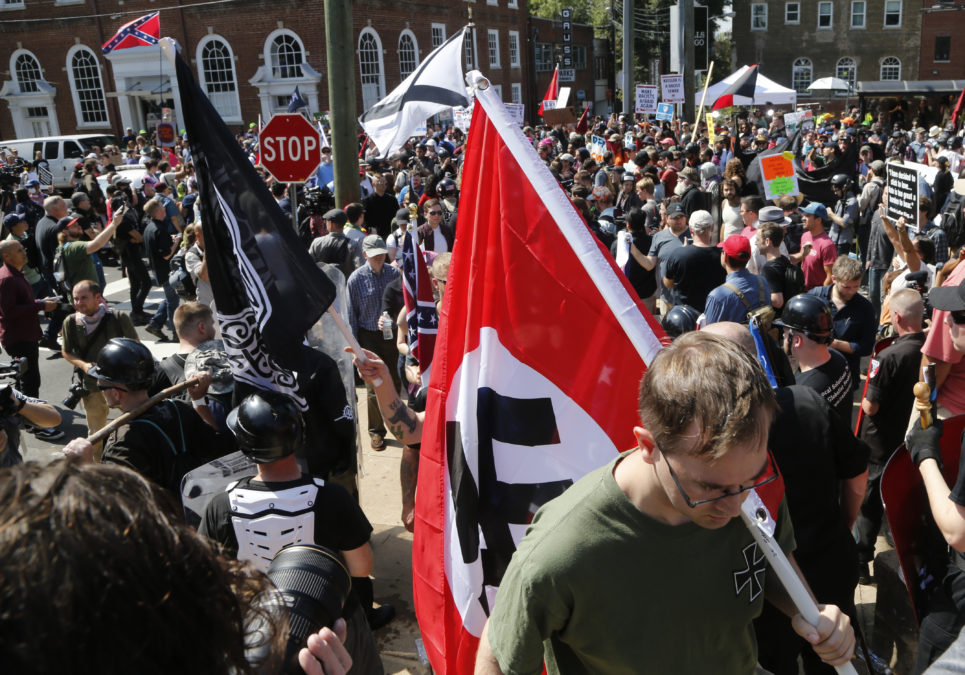 A white supremacist carries a swastika flag at the Unite the Right rally in Charlottesville, Va.

Every year, the Southern Poverty Law Center releases a report on the year in hate and extremism. That report was just released, and four things jumped right out at us.

The total number of hate groups in the United States recognized by the center rose to a record 1,020 last year, up about 7 percent from 2017. It was the fourth year in a row to see an increase.

The Southern Poverty Law Center tracks these groups throughout the year and maintains a database listing them. You also can check out an interactive map of these groups here.

That’s partly because they’re upset about a Census Bureau prediction that the U.S. will cease being a white-majority nation by 2045, but America’s racists also are sad about their perceived lack of support from President Donald Trump.

As the report notes:

“Starting to feel swindled by @realDonaldTrump,” influential antisemitic writer Kevin MacDonald tweeted on Nov. 15. “He will get slaughtered in 2020 unless he does something serious for his base on immigration.”

White nationalist Richard Spencer, who infamously led a crowd of fellow racists at a Washington, D.C., meeting in Nov. 2016 with a toast and raised stiff-armed chant of “Hail Trump,” was more blunt. Spencer took to Twitter in November to proclaim, “The Trump moment is over, and it’s time for us to move on.”

The Southern Poverty Law Center counted 264 black nationalist organizations in 2018, up from 233 chapters in 2017.

These groups – which the center classifies as hate groups and says are typically anti-Semitic and anti-LGBTQ – are rising in response to the increase in white nationalist groups, Trump’s often racist rhetoric and the president’s move away from civil liberties policies such as police reform.

These groups still are fringe compared with white nationalist, Islamophobic and anti-immigrant groups; however, the Southern Poverty Law Center notes:

Some on the right criticized the Southern Poverty Law Center for not including groups such as anti-fascists in the annual report.

As we have reported in detail, the loosely knit antifa movement certainly has its extremists. But activists who are prepared to “break bones” in the name of anti-fascism, or even the more extreme members of the Black Lives Matter movement, simply don’t meet the center’s detailed criteria for what constitutes a hate group.

Specifically, the center defines a hate group as “an organization that – based on its official statements or principles, the statements of its leaders, or its activities – has beliefs or practices that attack or malign an entire class of people, typically for their immutable characteristics.”

The definition continues: Hate groups “vilify others because of their race, religion, ethnicity, sexual orientation or gender identity.”

Anti-fascists certainly hate people who espouse hateful views on white supremacy or homophobia or have other racist or discriminatory beliefs. The difference here is that such beliefs are not immutable — people aren’t born with fascist or racist beliefs. Whereas people are, of course, born African American or Jewish or LGBTQ.

Sign up to get The Hate Report by email.

The Hate Report: 4 takeaways from the big annual hate study

By Will Carless Reveal from The Center for Investigative Reporting February 22, 2019