The Hate Report: Gab got shut down, but only after 11 people died 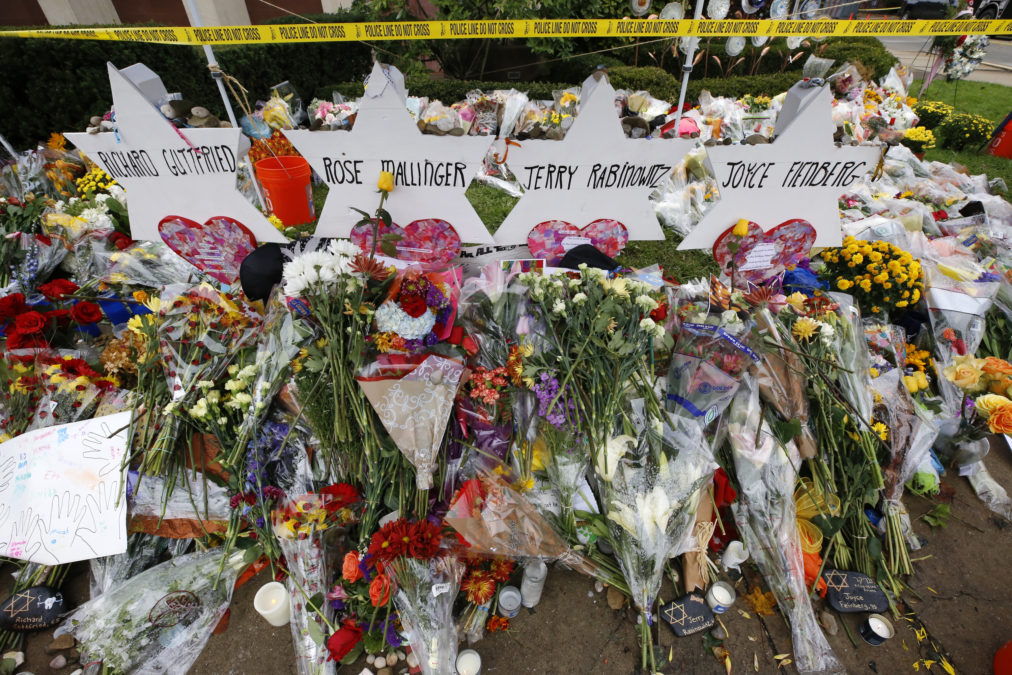 Flowers are pile around Stars of David Thursday, Nov. 1, 2018, at a makeshift memorial outside the Tree of Life Synagogue to the 11 people killed Oct 27, 2018 while worshipping in the Squirrel Hill neighborhood of Pittsburgh. (AP Photo/Gene J. Puskar)

In this week’s roundup: Tech companies severed support with alt-right social media site Gab this week, but the site’s hateful content was well-known before the Pittsburgh massacre; how President Donald Trump’s conspiracy theories help confuse and radicalize terrorists; and how to help victims of hate.

On Saturday morning, a man walked into the Tree of Life synagogue in the Squirrel Hill neighborhood of Pittsburgh and opened fire. After about 20 minutes of shooting, he had killed 11 people, mostly elderly worshippers, in the worst anti-Semitic attack in the nation’s history. When SWAT teams arrived, the suspect — who police have identified as 46-year-old Robert Bowers — returned fire before surrendering to police.

In the minutes before the attack, Bowers had posted three chilling words on his Gab account:

That Bowers chose Gab to announce his intention to attack Jews shouldn’t come as a surprise.

The alt-right social network, which we have been reporting on for almost a year, has managed to thrive by courting racists from across the world who were getting kicked off of Twitter and Facebook. Branding itself as a free speech haven, Gab has for months run a propaganda campaign aimed at attracting people exactly like Bowers.

By Tuesday, Gab had stopped functioning. The site’s hosting provider, Joyent, booted the site, as did payment processors PayPal and Stripe. On Sunday, Gab’s chief technology officer announced he was quitting the company. But the site’s founder, Andrew Torba, vowed to fight on: “GAB IS NOT GOING ANYWHERE,” he wrote in a statement on Monday. “No-platform us all you want. Ban us all you want. Smear us all you want. You can’t stop an idea.”

But why did it take the tech companies so long? After all, Gab had already been booted from Apple and Google’s app stores for months.

Gab has been the go-to site for neo-Nazis, anti-Semites, the alt-right and assorted racists for at least a year. A move by Twitter earlier this year to ban hundreds of offensive accounts was a windfall for Gab, and many of Twitter’s vilest commentators, from neo-Nazis Andrew Anglin and Christopher Cantwell to white supremacist Brad Griffin, who goes by Hunter Wallace, soon made the site their favored ranting ground.

A Twitter account, @GabsBestBits began collecting some of Gab’s content a couple of months ago. Among the posts the account collected was a Gab user calling to “finish what Hitler started” and proclaiming “Heil Hitler, Heil Trump, Heil Victory.” Another post saved by the account was a Gab user specifically threatening journalists.

And here are some of the user-created Gab groups that the site suggested users join:

And in the weeks before the Pittsburgh attack, Gab’s account tweeted thinly veiled anti-Semitism, including posting, without context, a Bible verse referring to Jews as “of the synagogue of Satan” and this tweet, referring to an online activist:

The Daily Beast also reported that both PayPal and Stripe had been warned about Gab for months in emails and tweets from activists.

Since Gab went offline, Torba has sought desperately to portray the site’s plight as “censorship,” pleading to his followers on Twitter that the site is being persecuted.

While there is an ongoing debate about whether a handful of large companies should wield so much power over the internet, the fact remains that, like bars refusing service to customers who are drunk or offensive, private tech companies don’t have to serve people if they don’t want to.

What the Pittsburgh shooting shows, however, is that in Gab’s case, the companies serving the site chose to turn a blind eye to obvious and widespread hate speech until 11 people were killed.

Messages to Joyent and Torba were not returned.

There was the tweet about white South African farmers in August, built on the conspiracy theory that South Africa is in the midst of “white genocide.”

More recently, Trump has tweeted unfounded rumors about the migrant caravan making its way from Central America to the Southern border, tweeting earlier this month that it contained “criminals and unknown Middle Easterners,” a claim for which he later acknowledged he had no proof. And Trump and his family have helped spread the trope that billionaire philanthropist and activist George Soros is helping to fund the caravan.

We now know that conspiracy theories like these explicitly help radicalize terrorists like Pittsburgh synagogue shooter Bowers, who shared the same theories on his Gab account, and Trump megafan and alleged pipe bomber Cesar Sayoc, whose online presence also closely followed and spread the lies told by the president. Sayoc, for example, specifically mentioned several times on social media that Soros was funding the migrant caravan. Soros was one of the targets of the bombing campaign.

But the president’s sharing of these conspiracy theories helps propagate hate in another way: by adding confusion and chaos that obscures truth and makes it difficult for vulnerable, troubled people like Bowers and Sayoc to tell fact from fiction.

Conspiracy theories are an essential element of the white supremacist mindset and are present in virtually every racist, far-right community. This link between conspiracies and the growing power of white supremacy is why, in a 2015 conversation between the founders of the two most important nodes of the online white supremacist ecosystem, both agreed that the conspiracy-mongering of Infowars was a crucial gateway for bringing new followers into the movement.

Trump’s constant claims about “fake news” are the other side of the coin to his willful spreading of conspiracy theories. Every time Trump talks or tweets about fake news, he gives white supremacists and budding domestic terrorists an excuse to look the other way whenever they read an article or watch a video that counters their conspiratorial worldview.

The last week of homegrown hate and terrorism has shown just how dangerous it can be for the president to discredit facts and reality, while at the same time promoting lies and fantasy.

Two possible hate crimes you may have missed

The Pittsburgh synagogue shooting, the arrest of the alleged pipe bomber and the election of a proto-fascist president in Brazil have grabbed the headlines in the hate world in the last couple weeks.

But there were also two hate crimes that on any other fortnight would have probably led our report:

We’re launching a new recurring feature in the Hate Report called “Do better” that lays out ways readers can directly help victims or combat hate in their communities.

If you’re looking for ways to help the victims of last weekend’s Pittsburgh synagogue shooting, you can donate to this crowdfunding campaign going toward short-term needs like funeral expenses and medical bills.

The campaign was launched by Tarek El-Messidi, a Muslim-American activist, and is being hosted on LaunchGood, a crowdfunding platform that focuses on the global Islamic community.

“Through this campaign, we hope to send a united message from the Jewish and Muslim communities that there is no place for this type of hate and violence in America,” El-Messidi wrote in a note on the donation page. “We pray that this restores a sense of security and peace to the Jewish-American community who has undoubtedly been shaken by this event.”

LaunchGood is also hosting another crowdfunding campaign to raise money to support the families of the victims of the hate-driven shooting spree in Kentucky we mentioned above.

The Hate Report: Gab got shut down, but only after 11 people died

By Will Carless Reveal from The Center for Investigative Reporting November 2, 2018