The Hate Report: How Homeland Security has stiffed anti-extremism groups 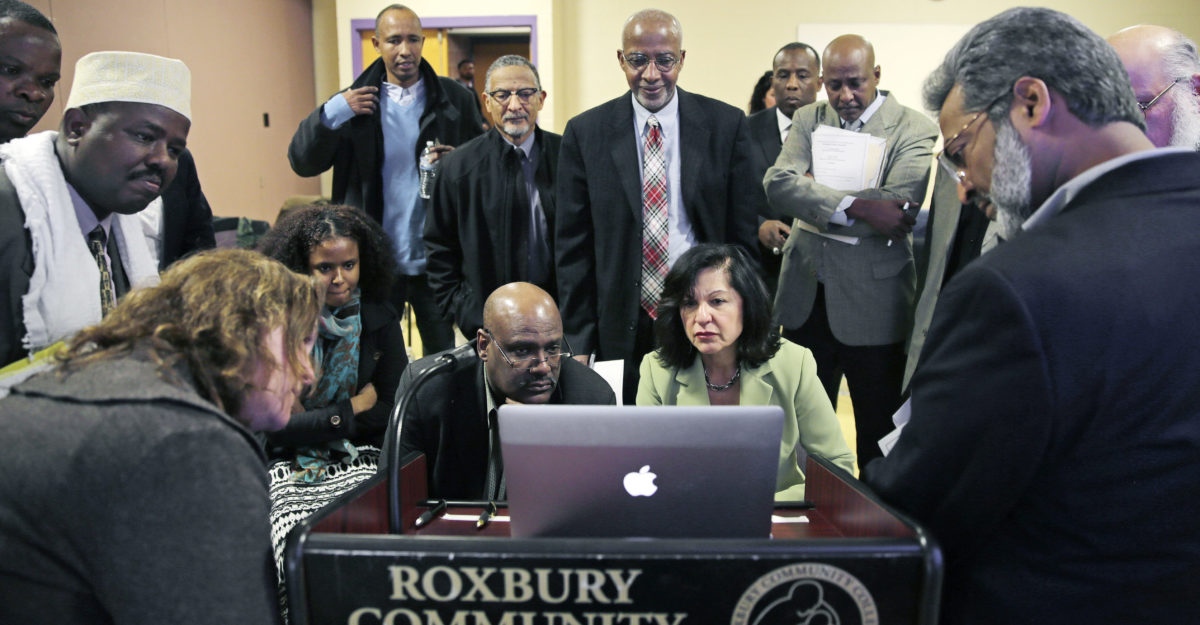 Muslim, Christian, minority and government leaders fix their eyes on a laptop screen showing a video as part of a federal pilot program called Countering Violent Extremism, at Roxbury Community College in Boston in 2015.

In this week’s report: A scoop on the government’s anti-terrorism efforts and a rundown of the biggest hate incidents of the week.

It was supposed to be a profound new federal effort to combat modern terrorism at its very roots. In January, the Department of Homeland Security announced, with much fanfare, the first-ever recipients of the department’s long-awaited Countering Violent Extremism grants.

But four months after naming the grant winners, we found that the Department of Homeland Security has yet to shell out a penny of the money Congress earmarked back in 2016 to help make Americans safer.

And some of the organizations say they’re struggling both to survive and to get answers from the department about the money they’re owed.

The grants, totaling $10 million, were awarded to groups like the Heartland Democracy Center, which sets up counseling groups for kids at risk of radicalization, and Life After Hate, which helps white supremacists and neo-Nazis transition into new lives. The whole concept of the program was to work with grass-roots organizations to stop young people before they radicalized and attacked.

“When a sizable grant is awarded and we don’t see it, it can be crippling to an organization like ours,” said Todd Mack, executive director of Music in Common, a Massachusetts-based organization that brings youth from different ethnic and religious backgrounds together to perform and record music. “It’s frustrating, it’s really frustrating.”

According to tax records, Music in Common has an annual budget of about $80,000. In January, it was awarded $159,000, or almost two years’ worth of funding from the Countering Violent Extremism grant.

Life After Hate was due to receive $400,000, which could have funded the organization’s work for two to three years, said Angela King, the group’s co-founder.

“It’s huge,” King said. “The impact is that now we have to spend our time trying to raise money, instead of doing the work that we need to be doing.”

Announcing the grant winners in January, then-Homeland Security Secretary Jeh Johnson focused on how important this new approach to countering terrorism has become:

“In this age of self-radicalization and terrorist-inspired acts of violence, domestic-based efforts to counter violent extremism have become a homeland security imperative,” he said.

It is now apparently stuck in a bureaucratic and political quagmire, as homeland security administrators try to figure out what’s happening with the program and whether it will even survive under President Donald Trump.

The Countering Violent Extremism program has been riddled with controversy from the outset. Critics of the program, from academics who study terrorism to human rights groups, have argued it is little more than a smokescreen for covert government monitoring of Muslim communities around the country.

Earlier this year, Reuters reported that Trump was considering renaming the program “Countering Islamic Extremism,” a moniker that at least one critical report said would actually be more accurate, given the program’s obvious focus on radical Islam to the expense of other hate groups.

The criticism only amplified with Trump’s election.

The president’s frequently indelicate rhetoric on Islam, his hiring of noted Islamophobes and his executive order launching a “Muslim ban” cast a new shadow over the program. Earlier this year, citing the president’s apparent hostility to their religion, four of the Islamic-centered organizations that had been awarded grants announced that they would not be accepting their share of the money, some $2 million of the total grant.

“It’s a heck of a lot of money, (but) our mission and our vision is to serve the community and to bring our community to a position of excellence,” Jihad Turk, the founding president of the California-based Bayan Claremont school, told the Associated Press in February. “And if we’re compromised, even if only by perception in terms of our standing in the community, we ultimately can’t achieve that goal.”

The remaining grant recipients have been left wondering if they’re ever going to see any of the money they were awarded.

“Months ago, we started hearing reports that the transition team for Trump was going into different government departments and paying attention to very specific topics and CVE was one of them,” King said.“We heard rumors before we even won an award – that there would probably be a bumpy road in the future.”

For King, that “bumpy road” means she can’t get a straight answer from the Department of Homeland Security, she says. So, she and her colleagues, who are counting on the grant money, have been left in limbo by the lack of decision-making.

The Department of Homeland Security did not respond to numerous requests for comment.

A Mississippi man was sentenced to 49 years in prison Monday for the brutal murder of his transgender girlfriend. The case was the first conviction on federal hate crime charges for an attack on a victim based on their gender identity.

Joshua Vallum stabbed 17-year-old Mercedes Williamson to death in 2015. Vallum, a member of the Latin Kings gang, killed Williamson in an attempt to keep his relationship a secret from other gang members.

The case was watched closely by LGBT activists across the country. A report earlier this year found that federal hate crime laws have only resulted in 37 convictions since 2009. And Attorney General Jeff Sessions was vocally critical of the 2009 expansion of the federal hate crimes law to include crimes committed because of the victim’s sexual identity.

There have been signs that Sessions has softened his approach recently, however.

As we reported a couple of weeks ago in the Hate Report, a Justice Department official told a Senate hearing that hate crime prosecutions will remain a priority for the department.

And Sessions released a statement praising Monday’s sentencing, saying the Justice Department will continue to “vindicate the rights of those individuals who are affected by bias motivated crimes.”

‘I screamed my wife’s name’

A family with five young children narrowly escaped with their lives from a house fire on Sunday in upstate New York. Investigators later found a swastika and a racist tag painted on the home of Laquan and Jennifer Madison, who are African American.

Police are investigating the fire as an arson and hate crime, reported the Albany Times Union. Laquan Madison described discovering the fire:

“I just happened to get up and go to the bathroom. I saw an orange glow … I screamed my wife’s name,” he said. “We all got out.”

The family was physically unharmed but emotionally traumatized, the police chief said.

“How do you feel safe in your home now?” he said.

A complicated and troubling attack in Pittsburgh

Prosecutors are still trying to piece together what happened in an alleged hate crime attack last week in Pittsburgh.

Initial reports were that a man who told police his name was Marcus Pope, and who police identified as Hispanic, was “lured” from a bar to a house where he was set upon by skinheads with racist tattoos. The men allegedly beat Pope up and robbed him.

A couple has been charged with “ethnic intimidation” for the crime and is being held in custody. But the victim, who police initially picked up, bleeding and shoeless at the side of the road, seems to have disappeared.

Prosecutors have been given two weeks to find the victim before a preliminary hearing can be held for the accused couple.

Echoing the days of the Ku Klux Klan, white supremacist Richard Spencer led a group of chanting demonstrators in Charlottesville, Virginia, on Saturday to protest plans to remove a confederate monument. They chanted, “You will not replace us” and “Russia is our friend.”

The protest was quickly dispersed, according to local media. The protesters also were mocked for using the sort of tiki torches more commonly found at backyard barbecues or Hawaiian theme bars.

The Hate Report: How Homeland Security has stiffed anti-extremism groups

By Will Carless Reveal from The Center for Investigative Reporting May 19, 2017