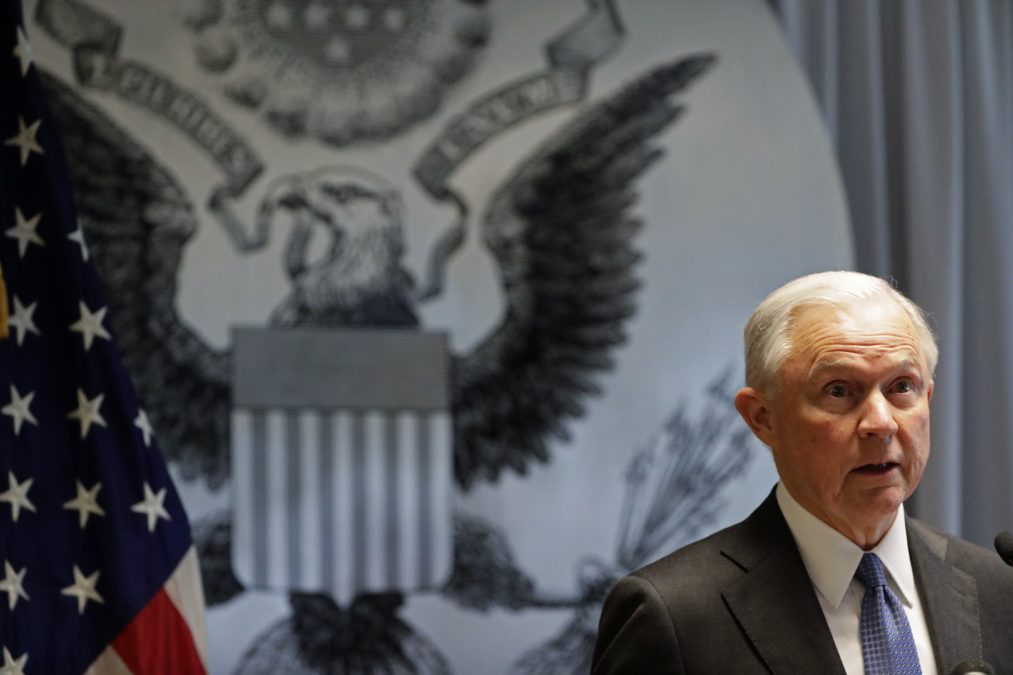 Attorney General Jeff Sessions has set a deadline for some jurisdictions to prove that they cooperate with federal immigration law.

This week, they got an early answer.

As the nation’s top criminal justice official, Sessions sets the agenda for federal prosecutors. He can direct them to focus on hate crimes, or he can tell them to concentrate on other crimes.

And Sessions has a long record of skepticism about federal hate crime prosecutions. Most notably, he vehemently opposed the 2009 expansion of the federal hate crime statute to include discrimination against people based on their sexual preference or disability, arguing that it was unnecessary because such crimes could be handled by state and local prosecutors.

But when it comes to hate crimes based on religion at least, the Department of Justice will continue to prosecute such cases aggressively, Eric Treene, the department’s special counsel for religious discrimination, told a Senate Judiciary Committee hearing this week:

The attorney general has been consistent and strong in his message that hate crime is violent crime, and we need to do everything we can with all the tools in our prosecutorial tool box to fight this problem.

Treene was grilled by Democratic lawmakers at the session, who accused Trump of instigating, or at least exacerbating, a recent reported surge in religious hate crimes. Here’s Sen. Mazie Hirono of Hawaii:

It’s no accident that there is a rise in hate crimes, because we’re in an environment where the president targets Muslims with his language.

This surge has only increased the need for a strong stance on hate crimes from the Department of Justice, Vanita Gupta, former head of the department’s Civil Rights Division, told the hearing.

Jonathan Greenblatt, CEO of the Anti-Defamation League, called for the formation of a federal task force to tackle hate crimes. He also welcomed the Justice Department’s clear statement on religious hate crimes.

Looming in the background of the discussion was a report last week from the Anti-Defamation League, which said anti-Semitic incidents increased 34 percent in 2016 from 2015 and have spiked 86 percent in the first three months of 2017.

(However, as we noted in last week’s Hate Report, the league’s data includes at least 100 hoax threats allegedly made by a Jewish American teenager, a decision that was questioned this week by some Jewish American leaders.)

The Huffington Post pointed out one glaring omission in the Senate hearing: Despite American Muslims being targeted frequently in hate crimes and hate incidents, the panel convened to discuss the rise in hate crimes didn’t contain a single Muslim American.

While legislators were discussing how to tackle the nation’s hate crime problem, there were at least six recent hate-fueled assaults across the U.S.:

America’s next big street fight between white supremacists and so-called anti-fascist, or antifa, activists was due to happen Saturday in the Appalachian town of Pikeville, Kentucky.

Pikeville lawmakers were so worried that they passed an ordinance a few days before the event banning protesters from wearing face masks or hoods.

In the end, however, there was just a lot of angry shouting and some farce. The Guardian published a roundup of the day’s events:

The neo-Nazis were more than an hour late to their own rally. The anti-fascists arrived early, leaving them to shout at a mostly empty and fenced-off plaza, in which there were only a handful of neo-Confederates from the League of the South, a racist group that according to the Southern Poverty Law Center still favours southern secession.

“If fascists make the trains run on time, where are your people?” the “antifa” jeered at 3pm, an hour after the demonstration was supposed to start.

The news site 100 Days in Appalachia described how the the event was met with frustration and anger by local residents, who said they don’t need sympathy or help from out-of-towners:

Pike County residents, who voted 80 percent in favor of Trump in the November election, say Saturday wasn’t representative of the area and some went as far as calling the course of events “an exercise in futility.”

“This is Appalachian shaming. They both think they need to speak for us and we can speak for ourselves,” said University of Pikeville Chaplain Robert Musick.

A few days later, however, May Day clashes between left-wing and right-wing activists elsewhere did get violent.

Portland also had canceled its annual rose parade Saturday because of a reported threat of violence from antifa protesters.

In the last week, swastikas have been found:

Meanwhile, American University police in Washington have issued a $1,000 reward in hope of finding out who left a bunch of bananas hanging from a string shaped like a noose on the campus Monday. The bananas were marked with “AKA,” the initials of the predominantly black Alpha Kappa Alpha sorority.

In New York, Joe Ottomanelli, a popular butcher, turned himself in this week after what his lawyer said was “an ugly and stupid incident” in which Ottomanelli is accused of handing a black delivery driver a noose.

And there was outrage and disgust this week when Baltimore Orioles star center fielder Adam Jones reported that he had been subjected to racial abuse at a game Monday against the Boston Red Sox.

Fighting back: Getting inspiration from hate

The surge of hate crimes across America has led several states to work to strengthen their hate crime legislation, while states that don’t have hate crime laws are considering putting them in the books.

That’s the premise of a story published Sunday by The New York Times:

A wave of hateful episodes and attacks have been reported across the country in recent months: threatening calls and notes, physical assaults and confrontations, and even deadly shootings. The response in at least a half-dozen states has been anti-hate legislation aimed at beefing up penalties and expanding definitions of what constitutes hate.

Some states are going even further. New York state lawmakers announced last week that they were making $25 million in grants available for organizations at risk from hate crime threats to boost their security.

“It’s for day care centers, it’s for religious institutions, any institutions that we think are at threat of being attacked or being subjected to hate crimes,” State Assemblyman Sean Ryan said.

Meanwhile, students across the country are being spurred by hate to act in different ways.

In Skokie, Illinois, students walked out of their high school to protest what they saw as a lack of punishment of a student who sent a racist Snapchat, Patch reported Monday.

Some of those who walked out allegedly believed the student had been suspended for only one day, and many of those who protested by walking out during classes described his punishment as insufficient. Several called on him to be expelled, according to videos and images of the protest showing dozens of students gathered outside the school.

In Florida, a group of Jewish students had an unusual message to whoever scrawled swastikas on their school’s entrance earlier this year: “Thank you.”

They used the graffiti as inspiration to hold an “evening of awareness and education” featuring a talk from a Holocaust survivor, Chabad.org reported:

Looking back at the chain of events, (high school student Alana) Halperin, who was one of the featured speakers on Wednesday night, echoes a thought she had heard from (local Rabbi Mendy) Bronstein: “In a way, we are grateful to those who did the harm. Through their ignorant actions, we are able to educate those around us, and stand up for ourselves and our beliefs.”

Buy my hate. You’ll come right back for more.

Hate for sale. Enough to start a war.

Hate the rich, the brown, the black, the poor.

Hate is clean. And hate will make you sure.

By Will Carless Reveal from The Center for Investigative Reporting May 5, 2017