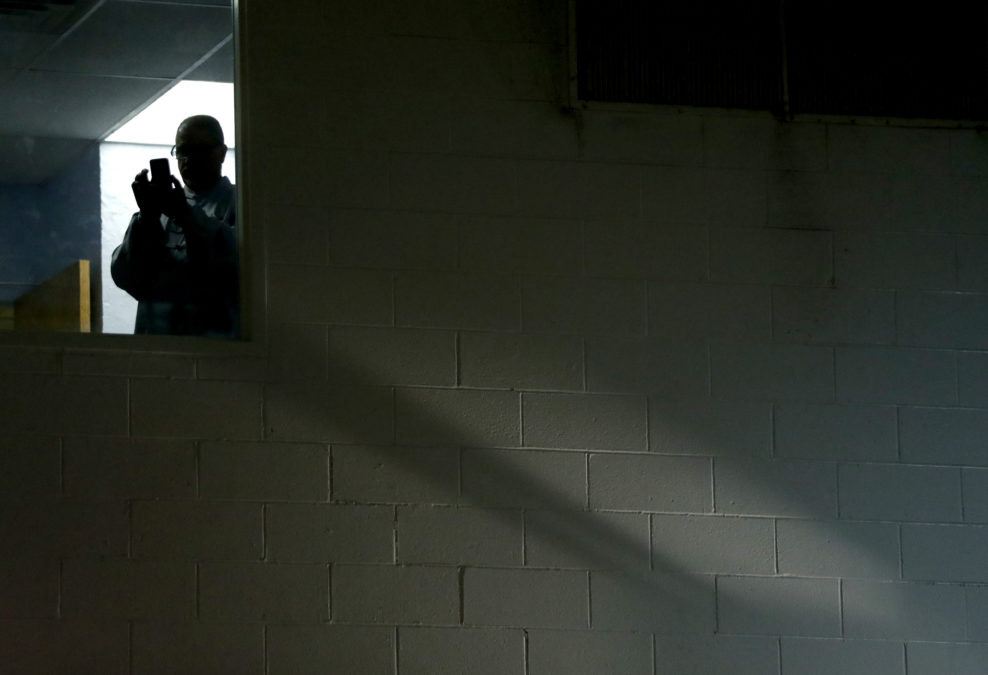 A man at a Jewish community center in Tenafly, N.J., looks on during a gym rally against recent bomb threats made to Jewish centers across the country.

This week continued to be dominated by the fallout from the deadly shooting in Olathe, Kansas.

Sunayana Dumala, the widow of 32-year-old Srinivas Kuchibhotla, who was killed in the attack, made an impassioned plea to the federal government to take action on hate crimes and spoke of her continued fear of such crimes as an immigrant in  the United States.

There were no signs that Adam Purinton, the suspect in the shooting, was affiliated with any hate groups. Instead, he appeared to be a so-called lone wolf. Back in 2010, then-CIA Director Leon Panetta called lone wolves “the main threat to this country.”

Since then, there have been several such attacks, from a 2014 shooting spree at Jewish centers in Kansas (in the same county as last week’s attack) to the deadly attack at an Orlando, Florida, nightclub last year.

Purinton reportedly harassed two men about their immigration status, a theme that has dominated the news cycle this year, thanks to President Donald Trump’s crackdowns on immigrants.

Anand Giridharadas, a journalist who spent years researching a similar crime, made the case that lone wolf attackers can be driven to their deadly acts by hateful or careless rhetoric from America’s leaders.

He wrote a book about Mark Stroman, a Texas man who killed two immigrants he believed were Muslim in 2001, in the aftermath of 9/11. He has developed a theory that Trump’s rhetoric on immigration and Islam is trickling down into the consciousness of troubled, angry citizens.

Those like Purinton are “electrified by a sense of having to save one’s country,” Giridharadas wrote in a series of tweets over the weekend. He later expanded on his tweets in The Atlantic. Here’s a snippet:

Part of being a leader is understanding how what you say will be used, how it will refract into other lives. Trump does not appear to understand how ideas like his trickle down into lives less gilded than his. These ideas – that there is a problem intrinsic to Islam, that all is not well with “the Muslims,” that America’s “open borders” are causing bad hombres and rapists and “illegals” without visas to steal its very sovereignty – these ideas spill from the lips of a tycoon like Trump. Perhaps they are nothing more than a political tactic for a man who has been happy to build hotels in the Muslim world and manufacture products in Mexico and China and socialize with international friends and wives. But they come into the heads of men like Stroman and Purinton, men who don’t have a lot going on, men who’ve been given to wondering whether they matter to this world, men who used to enjoy the perquisites of being white and male, especially when they had nothing else to hold on to, and who now feel those perquisites slipping away. “Based on the timing and the extraordinary increase we’ve been seeing, not only in New York but around the nation, you have to conclude that the presidential campaign was the major factor,” Stephen Davis, the deputy commissioner for public information, told Bloomberg. “To be cautious about casting blame, one would have to consider the heated nature of the rhetoric on both sides” during the election.

Bloomberg reported that hate crimes have spiked 42 percent in the post-election period in the city compared with the same time last year.

While white supremacist websites applauded the Olathe shooting (one neo-Nazi website claimed in Purinton’s defense that “Indians will do that to you. Push you right straight over the edge”), three different GoFundMe accounts have raised more than $1 million for the victims’ families.

The Kansas City Star on Monday issued a sharply worded editorial with the headline: “Trump’s silence on deadly Olathe shooting is disquieting.”

The editors called on Trump to address the shooting at his speech Tuesday before Congress. They wrote:

He should use the opportunity to thoughtfully – and belatedly – address this brazen act of violence.

Because with each passing day, Trump’s silence is even more telling.

Each passing day this week also brought new attacks on Jewish community centers, which have been engulfed by bomb threats and other attacks since the beginning of the year.

Trump opened his speech to Congress on Tuesday with a statement that covered many of the incidents of the previous week, including the shooting:

Recent threats targeting Jewish community centers and vandalism of Jewish cemeteries, as well as last week’s shooting in Kansas City, remind us that while we may be a nation divided on policies, we are a country that stands united in condemning hate and evil in all its forms.

The president’s words were welcomed by the Anti-Defamation League’s Jonathan Greenblatt:

Thanks @POTUS for condemning #hate ag Jews & immigrants. Now let's fight it. See our plan. Let's do it together. https://t.co/4olwW2fFP5

But despite the president’s words, reports of more incidents continued to roll in:

Meanwhile, Indiana lawmakers, not for the first time, failed Tuesday to pass a hate crime bill, leaving it as one of five states without a law specifically targeting hate crimes.

Meanwhile, the Anti-Defamation League had this useful graphic showing the extent of the threats to Jewish organizations:

The league is keeping a tally of the bomb threats here, and ProPublica is maintaining a map.

Thursday: A bullet through a synagogue window

It’s an increasingly common theme these days: scrawling hateful graffiti on a synagogue, church or mosque. And sometimes the scrawlers commit their vandalism in full view of security cameras.

That’s what happened in Ohio last month and led to 44-year-old Todd Williams being charged Thursday with ethnic intimidation, desecration and criminal mischief after he  reportedly vandalized the Islamic Ahlul Bayt Society center in Columbus.

Williams had written, “Allah is a fraud dum dums,” on the mosque’s doors. He told a local news team that he should apologize to the people who attend the mosque.

“It’s not hate. I care about their soul. I want them to turn to the true God,” he said.

In Indiana, the FBI was investigating an attack on the Adath B’Nai Israel Temple in Evansville as a possible hate crime, The Hill reported Thursday. Unlike the scores of threats called in to Jewish organizations nationwide, the Indiana synagogue was attacked physically – a bullet was fired through its window into, of all spaces, a kids’ classroom. Nobody was in the room, and an office manager discovered the damage after the fact.

Someone had to walk into a children’s playground, then look into a classroom and then fire some sort of weapon. It was to inflict damage, but I think more importantly, (the person) tried to inflict fear,” he said. “We’re in this climate now where acts of hate are happening everywhere.”

According to the FBI, Thompson had engaged in a “sustained campaign to harass and intimidate” a former girlfriend. He is accused of making threats to Jewish community centers in both his own name and the name of his ex.

In a strange twist, Thompson is a disgraced former reporter for The Intercept. Thompson was fired last January after the news outlet said he made up sources and quotes in his stories. The Intercept issued a statement Friday saying it was horrified to learn of the charges.

There have been more than 90 bomb threats since the beginning of the year, according to ProPublica. Thompson is charged with making at least eight.

In 1915, a Jewish businessman was lynched. In the 1950s, the city’s largest synagogue was bombed. And some Jewish residents fear 2017 might be another landmark year in anti-Semitism for this Southern city. Here’s a key quote from the story:

“It’s heartbreaking to see the attacks and threats and desecration of Jewish cemeteries in recent days,” said playwright Jimmy Maize, whose play “The Temple Bombing” is on stage this month at Atlanta’s Alliance Theatre. “I have to say that writing this play feels too much like history repeating itself.”

According to The Atlanta Journal-Constitution, synagogues and mosques alike have received threats in 2017, including a January bomb threat to the Marcus Jewish Community Center of Atlanta and threatening emails to two metro mosques in early February.

By Will Carless Reveal from The Center for Investigative Reporting March 3, 2017