The Hate Report: The alt-right is a mess 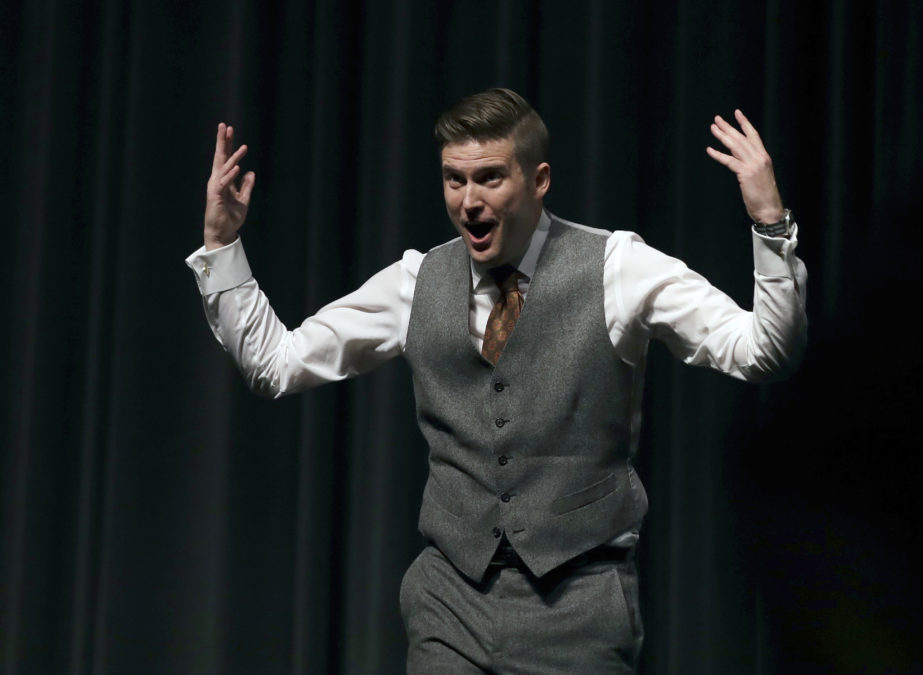 White nationalist Richard Spencer tries to get students to shout louder as they clash during a speech at the University of Florida in Gainesville in 2017.

In this week’s roundup: Richard Spencer says the antifa movement is winning; an actual neo-Nazi wins a GOP primary; terror strikes in Austin, Texas; and another gaming platform clamps down on hate.

“I really hate to say this,” Spencer says, “antifa is winning.”

The announcement came after a string of college talks by Spencer at which he was heckled, booed and, in some cases, physically threatened by black-clad protesters affiliated with the antifa, or anti-fascist, movement.

“When (these events) become violent clashes and pitched battles, they aren’t fun,” Spencer says in the video.

He originally planned his college tour as a way to go into the “belly of the beast,” he said, and confront “Marxist” education at its heart. For a while, Spencer was able to make these appearances without violent opposition.

“What changed was Charlottesville,” he says in the video.

Alt-right rallies had drawn violence before the deadly August rally in Virginia. But afterward, members of the antifa – a loose-knit anti-racist movement – increasingly started facing off against Spencer and his cohorts whenever they appeared in public. Those confrontations, as Spencer notes, have become increasingly violent, with campuses incurring hundreds of thousands of dollars in costs to provide extra security for Spencer and his team.

As we wrote last summer, antifa organizers in the San Francisco Bay Area went as far as forming a Rapid Response Team to actively hunt down members of the far right and – if necessary, they said – give them “broken bones.”

As the antifa’s presence has grown over the last year, there’s been much debate on the left over the movement’s sometimes violent tactics. Some thought their violence was counterproductive, giving undue sympathy and attention to the alt-right. Others thought it was necessary to keep racists out of their community.

Now, with Spencer’s acknowledgement, the debate has become whether the antifa’s tactics – including occasional violence – worked. This debate, however, is unlikely to bother antifa activists. Most members of the movement we’ve talked to couldn’t care less how the media or the general public feel about their tactics.

In addition to Spencer’s announcement, neo-Nazi troll Andrew Anglin also noted on his website that the current fascist movement in America is a bit of a joke:

Capping off the fascist meltdown triumvirate was the news we noted last week that the white nationalist Traditionalist Workers Party has collapsed following a bizarre “love square” (is that a thing?) between the party’s leader and its spokesman, his wife and his stepdaughter.

Some neo-Nazis picking up victories

Arthur Jones, a former leader of the American Nazi Party, has won the Republican primary for a congressional seat in Illinois.

“The Illinois Republican Party and our country have no place for Nazis like Arthur Jones,” state party Chairman Tim Schneider said in a statement.

However, the party opened the door for Jones’ victory by not running an official GOP-backed candidate in the heavily Democratic-leaning district in Chicago’s southwestern suburbs. The Illinois GOP reportedly made calls and sent mailers to voters regarding Jones’ racist views. Nevertheless, over 20,000 Republicans cast ballots for Jones.

Jones’ website contains a page titled, “The Holocaust Racket,” disputing that 6 million Jews were killed during the Holocaust. It reads: “Jewish International Communism and Jewish International Zionism are directly responsible for the murder of at least 300 million people and these blood-thirsty criminal vampires may yet ignite a THIRD WORLD WAR, if we don’t stop them.”

As HuffPost reports, Jones is just one of a slew of white supremacists running for office this year:

The deadly bombing campaign in Austin, Texas, initially targeted some of the city’s prominent African American families. The suspect is now dead, and the 25-minute confession he recorded didn’t reveal a motive. But many in Austin and beyond have labeled the bombings acts of terrorism.

The legal definition of terrorism requires a political motive, and it’s still unclear whether Mark Anthony Conditt’s actions fit. But family and friends of the victims are feeling terrorized.

Norrell Waynewood, whose brother, Stephan House, was killed by a March 2 mail bomb, told The Daily Beast that his family is living in fear.

“My mom does not feel safe. His wife and his daughter do not feel safe. They’ve left their homes,” Waynewood said. “I’d be totally happy if this is the end; I just don’t feel like it is.”

House’s family has set up a crowdfunding campaign to raise money for House’s daughter.

Blizzard Entertainment, the gaming company behind the massively popular game “Overwatch,” is attempting to push back against alt-right messaging on its platform.

As CNET reports, Blizzard is actively discouraging players from posting the image of Pepe, a cartoon frog that’s been adopted as an alt-right icon. The image also is being banned at in-person competitions where fans watch professional esports players compete.

“The Overwatch League discourages the use of symbols and imagery which are associated with or used by hate groups, including Pepe the Frog,” a company spokesman said in a statement to CNET. “At Blizzard Arena, it’s our policy that fan signs comply with this policy. We likewise ask the same of Overwatch League teams and players on their social-media channels.”

Blizzard is just the latest gaming company to crack down on far-right organizing. After we reported that Valve’s online gaming platform Steam had hundreds of user-created groups glorifying school shooters and white supremacy, the company began quietly removing many of those groups.

Correction: A previous version of this story gave the wrong name for the brother of Austin bombing victim Stephan House. The brother’s name is Norrell Waynewood.

The Hate Report: The alt-right is a mess

By Will Carless and Aaron Sankin Reveal from The Center for Investigative Reporting March 23, 2018