The Hate Report: The alt-right’s newest target is kosher products 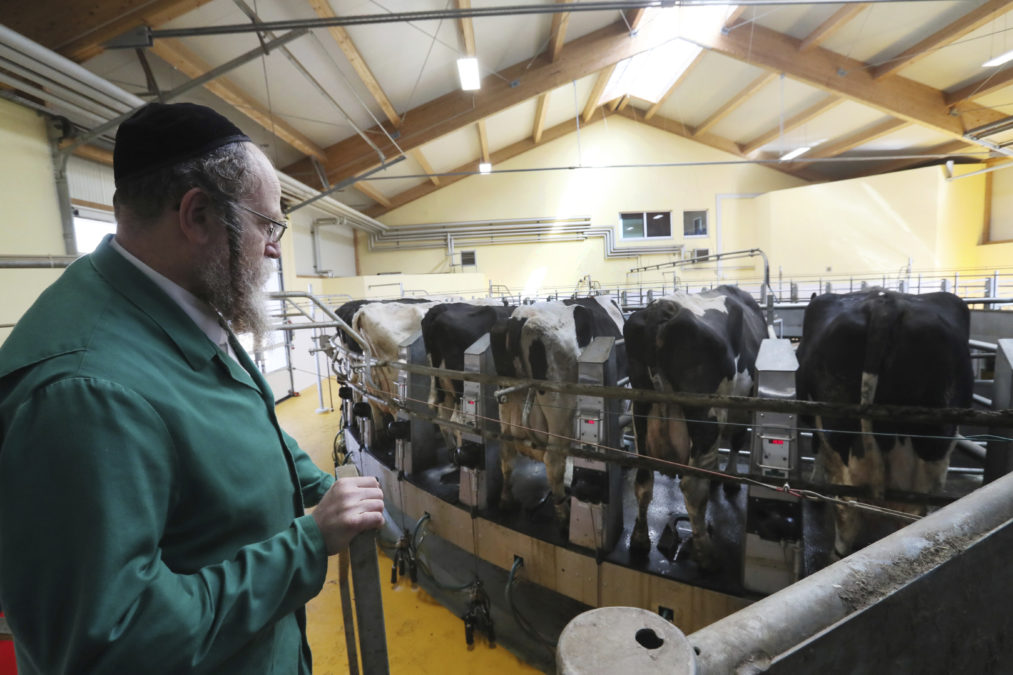 A rabbi controls the milking in a stable building in Rothenacker, Germany.

What I’m about to introduce you to is a segment of our food culture that has been kept so low profile to the American public that virtually no one is aware of how dominant it is on our refrigerator and cupboard shelves.

This ad, for an app that helps you locate food that isn’t kosher-certified, provides an interesting view into the ads that help fund alt-right podcasts, and the extent to which conspiracy theories drive so much in the alt-right world.

The app is called KosChertified?, and it’s available on Apple’s App Store and Google Android.

The podcast, which we’re not naming because we don’t want to give it more publicity (if you want to know, just email me), has hosted the ad in at least one episode. It was sandwiched between hateful screeds about immigration in the United States and immigration in Europe.

Peter Jalajas, CEO of the company behind KosChertified?, said in an email that the app merely offers education to consumers. One of the websites promoting the app asks why consumers have been “kept in the dark” about kosher certification, and cautions ominously that “the tax exempt revenue flows to many programs and institutions worth examining for its effect on you and your interests” – mirroring the white nationalist conspiracy theories peddled on alt-right websites and podcasts such as the one on which his app is advertised.

Kosher certifiers check, for example, that meat and dairy products are strictly separated and that animals are slaughtered in a humane way that ensures minimal suffering. About 41 percent of packaged food on sale in the U.S. is certified kosher, according to market research firm Mintel.

It’s also becoming more popular. A 2017 Food Business News report described the recent boom in kosher certification as driven not just by Jews, but also by other consumers concerned about taste, food safety and dietary considerations.

Aside from vague proclamations about costs to consumers and concerns about why the public has been kept in the dark about kosher certification, the KosChertified? website doesn’t go into detail about why consumers should be concerned.

For example, whoever runs the account likes to include a pig emoji every time he or she tweets about the website – an obvious allusion to pork, which is not kosher. In addition to the obvious anti-Israeli content, the account has tweeted clear dog whistles, such as using the word “goyim,” a Hebrew word for non-Jews that white nationalists have been appropriating.

Aryeh Tuchman, associate director of the Center on Extremism at the Anti-Defamation League, said he’s never heard of an anti-kosher app before, but he’s seen this sort of thing plenty of times.

“The notion that there’s this kosher mafia or kosher conspiracy is not new at all,” he said. “There have been allegations for decades that the kosher certification industry is just a tool for Jews to rip off non-Jews. Fifteen years ago, before the app economy, there were white supremacist websites that included reproductions of the kosher certified symbols, as a way of doing exactly what this website and app are trying to do.”

Jalajas declined to be interviewed, but he sent a short statement,including this explanation as to why his company is advertising on a white nationalist podcast:

As a small company, we are unable to purchase “mainstream” advertising at the rates they demand. We are forced to fund our marketing ventures in popular and “edgy” podcasts because this meets our budgetary constraints while delivering our message to large audiences that are intrigued by this inscrutable topic and delighted about the benefits our app offers. The website and app are run by Free Press Promotions LLC, which is based in San Marcos, California, according to state records.

We found out about KosChertified? thanks to the efforts of our volunteer Hate Sleuths. They’re a team of volunteer readers who help us with research assignments. If you’re interested in signing up, go here.

Here are a couple of other nuggets the Hate Sleuths dug up in their research of the podcast:

American white nationalists love to use other countries as examples.

Several Hate Sleuths noted that the podcast hosts often turned to Europe to illustrate their fears and hysteria about the impacts of immigration. Indeed, the podcast referenced above has a regular section devoted entirely to Europe that usually focuses on immigration. It also has an occasional report from South Africa.

However, as one Hate Sleuth noted, the podcast relies on half-truths and false statistics to paint Europe as a continent under siege by nonwhite immigrants. That’s a line President Donald Trump also has seized on during his presidency. Last year, for example,Trump told a rally in Florida:

Trump mentioned Sweden in reference to terrorist attacks by immigrants in Europe. But there hadn’t been an attack in Sweden the night before, and at the time of Trump’s remarks the country hadn’t seen an Islamist attack since 2010. As The New York Times reported, Swedes found his remarks baffling.

In a tweet last month, Trump appeared to endorse the conspiracy theory that white farmers are being killed in a “white genocide” in South Africa.

It’s notable that in both the Sweden and South Africa examples, Trump made clear that his source was Fox News anchor Tucker Carlson. Which brings us to our next point.

We have chronicled Carlson’s slide from journalist to de-facto alt-right propagandist.

It’s a move that has delighted the hosts of the podcast the Hate Sleuths listened to.

Carlson just gets it, the hosts like to say. Unlike other mainstream conservative news personalities such as Laura Ingraham, who are only just starting to understand the issues important to white nationalists, Carlson has been on board for awhile, the hosts said.

Join us! Plus: What should the Hate Sleuths dig into next?

And what do you think the Hate Sleuths should dig into next? Do you have a trove of documents we could rake through? Or a tip on a good story?

Get in touch at the emails below.

The Hate Report: The alt-right’s newest target is kosher products

By Will Carless Reveal from The Center for Investigative Reporting September 28, 2018