The Hate Report: The history behind the Portland stabbings 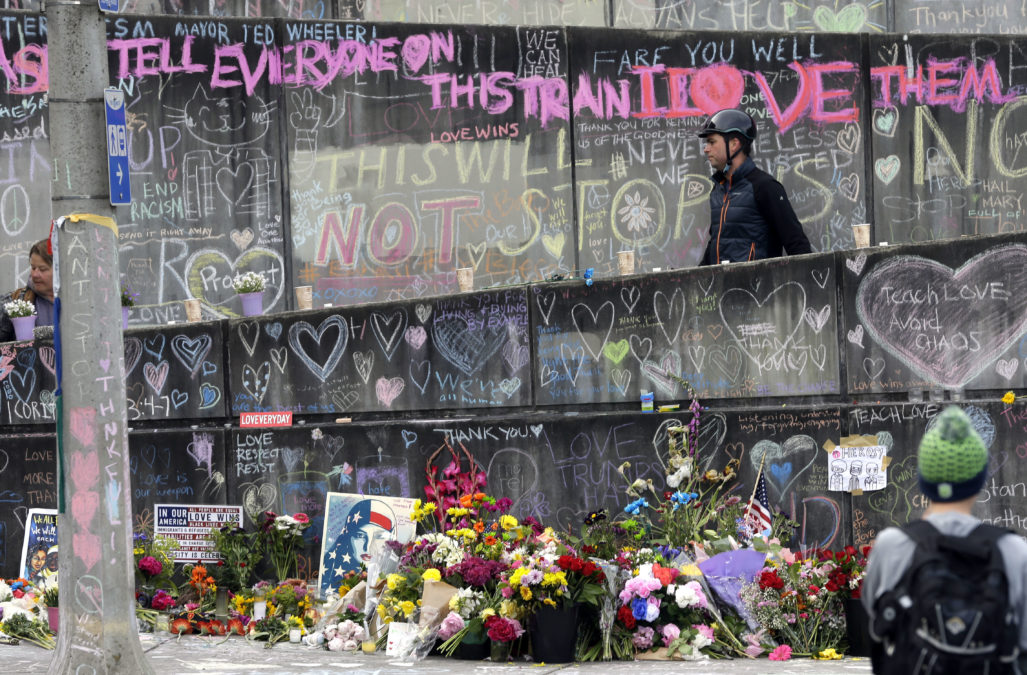 A bicyclist walking his bike down a ramp in Portland, Ore., is surrounded by messages, flowers, images and candles at a memorial for two men fatally stabbed on a light rail train.

Portland, Oregon: It’s the city of uber-liberal hipsters, where concerned hippie couples quiz the waitress about whether the organic chicken they’re about to eat has had a happy life.

While Portland has long had a reputation of liberalism and acceptance, the city, and the state of Oregon, have an even longer history of racism and neo-Nazism.

Portland’s checkered past is being reanalyzed in light of the fatal stabbing last week of two men on a commuter train. Jeremy Christian has been charged with murder.

Here’s how a story in the Huffington Post summed up the state’s past:

Oregon’s history reads like a timeline of white supremacy. Its indigenous peoples were massacred. The state’s original constitution had a complete ban on blacks living in the state. It became a home to thousands of KKK members in the 1920s. It was the scene of Japanese-American incarceration during World War II. In the Jim Crow era, whites-only signs adorned storefronts just as they did in the South. This history created conditions ripe for the evolution of a robust neo-Nazi culture in the 1980s and ’90s.

The story built on similar recent examinations of Portland’s racist past by BuzzFeed, which pointed out that Portland was, remarkably, a white-only state until 1926, and The Atlantic, which labeled it the “whitest big city in America.”

Since the beginning of the year, there have been several hate-related incidents in or near Portland, some of which we have outlined in the Hate Report.

Late February and March saw a slew of anti-Semitic incidents, including the resurfacing of a celebrity Ku Klux Klan leader and a spate of anti-Semitic graffiti. In April, a Marine veteran was charged with a hate crime after attacking staff at an Iraqi restaurant. And last month a Latino family in the city had their car windows smashed and an incendiary device tossed into one of their cars.

Meanwhile, the city is bracing itself for rallies by white supremacists, who plan to march for free speech in Portland on Sunday. Portland Mayor Ted Wheeler was unsuccessful in his bid to revoke permits for the rally.

As we outlined in a story yesterday, Christian pledged to kill the next president – whether it was Hillary Clinton or Donald Trump – on his Facebook page in 2016. He pledged the coming attack to a varied collection of gods, including the ancient Nordic god Odin, part of an ancient religion we recently wrote about because it has inspired white supremacist terrorists to kill.

Christian also made threats against the police and praised domestic terrorist Timothy McVeigh on his Facebook page. The ex-con was still posting threats a few days before the train attack and his arrest.

Stuart Wexler, an expert on the religious roots of domestic terror, told me that if Christian had identified with Islam things likely would have played out very differently for him.

“You’d get a pretty quick visit from the Secret Service. I mean, even people who make joking threats oftentimes are supposed to get some kind of visit or warning,” he said.

Here are a few of the best articles we’ve read on the fallout:

King James: Hate in America ‘is living every day’

After someone spray-painted the N-word on the gate of his Los Angeles home, basketball star LeBron James had a heartfelt message for Americans: Racism is alive and well in this country, James told a press conference ahead of the NBA Finals on Wednesday:

As a researcher from the Cato Institute concluded earlier this year, there have been precisely zero fatalities on American soil from terror attacks committed by nationals of the countries targeted by Trump’s ban.

Another stabbing, a shooting and this week’s longread

While much of the public attention over the last week has been focused on the Portland attacks, there were at least two other violent hate crimes committed over the past seven days.

On Friday, an 18-year-old Florida resident Devon Arthurs allegedly shot and killed his two roommates in Tampa. His reason: He had recently converted to Islam and he was angry at America bombing Muslim countries.

Arthurs had previously identified as a neo-Nazi. His journey from neo-Nazi, to Islam, to alleged murderer is chronicled in a story published this week by Vice News. The story digs deep into Arthurs’ online life, with the author interviewing people who the accused killer messaged in the darker corners of the internet.

And, in the same vein as the Portland stabbings, only less deadly, a white man in the city of Clearlake, 80 miles north of San Francisco, allegedly attacked his black neighbor with a machete over the weekend.

Anthony Hammond, 34, allegedly yelled racist slurs at the victim just before the stabbing.

What’s next? Look to Portland

So, with all this violence, are there any glimmers of hope out there?

Well, take a look back at Portland.

In the wake of the attack last week, the city has seen an emotional outpouring of not just grief but support for the victims of the attack, who have been hailed as heroes. The transit center where the stabbings took place has become a de-facto shrine to those victims, with piles of flowers and cards, and Portlanders have written messages on the walls expressing solidarity with the city’s Muslims.

The white supremacists’ protest is still on for Sunday. But the city will also play host to several rallies in opposition to hate groups and in protest of last week’s attack.

The Hate Report: The history behind the Portland stabbings

By Will Carless Reveal from The Center for Investigative Reporting June 2, 2017