The Hate Report: The KKK is packing up its hoods 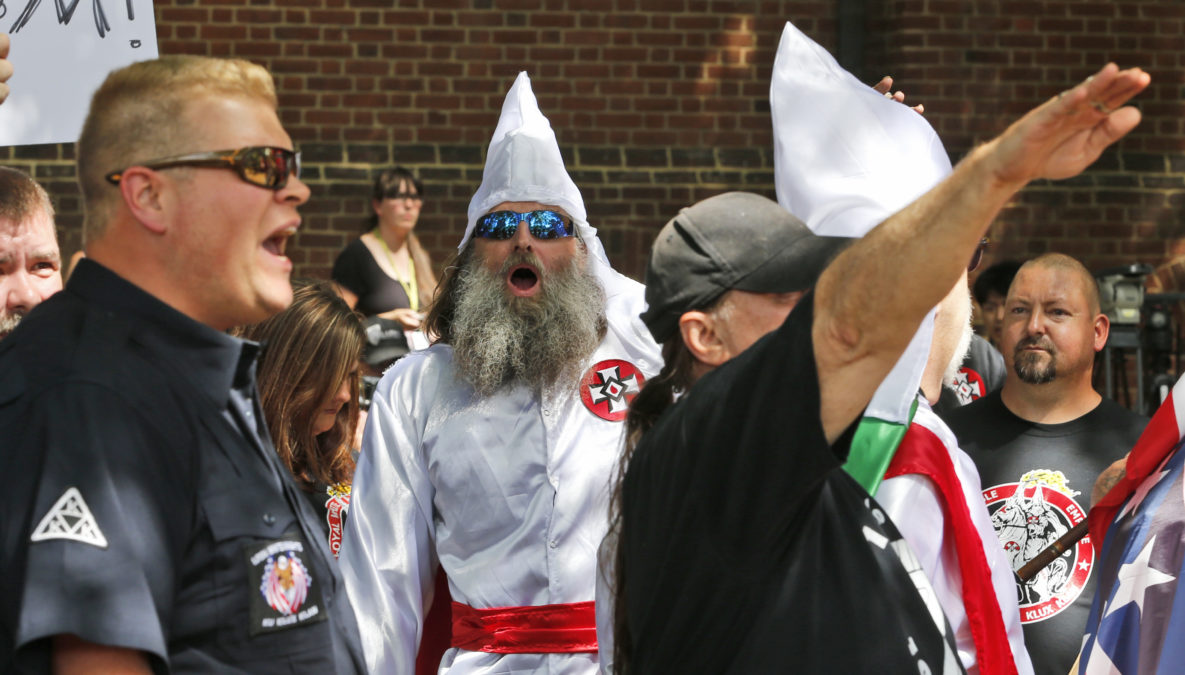 Ku Klux Klan members are escorted by police past a large group of protesters during a rally in 2017.

In this week’s roundup: the waning power of the KKK, the argument over whether a New Mexico school shooter was a racist finally seems settled, and a meme turns “Black Panther” hatred on its head.

In 2017, the number of active Ku Klux Klan chapters dropped by nearly 45 percent, from 130 in 2016 to 72 the following year, according to a new report from the Southern Poverty Law Center.

These figures provide hard data for a trend we’ve been hearing about anecdotally: the rapidly waning importance of the KKK within the white supremacist ecosystem. The Klan may have been the driving force in grass-roots American white supremacy since the 1860s, but the new wave of hate seems to have largely passed it by.

“The new alt-right type of white supremacist, the type of people who showed up at Charlottesville, are not interested in the KKK or its goofy look, crazy robes or secret handshakes,” said Heidi Beirich, the Southern Poverty Law Center’s Intelligence Project director. “The Klan is frankly being rejected in theses circles.”

The organizers of the Charlottesville, Virginia, rally explicitly planned to turn away any KKK members who showed up in full robe-and-hood regalia. It was part of a deliberate rebranding of white supremacy away from the signifiers of the KKK and toward something more modern, clean cut and seemingly respectable.

Think about white supremacist figurehead Richard Spencer, who wears businesses suits, has multiple college degrees and runs a nonprofit think tank. Not exactly the KKK. Consider The Daily Stormer publisher Andrew Anglin, who traffics in tech-savvy, irony-drenched absurdism. Neither’s aesthetic is related to the popular conception of the KKK, even if their ideologies are rooted in the same racist traditions.

While it’s impossible to determine whether the decline of the KKK is directly feeding the rise of other white supremacist factions, the Southern Poverty Law Center’s report found that other parts of the hate universe grew substantially last year. For example, the number of active neo-Nazi groups swelled from 99 to 121 in 2017.

Beirich said the Southern Poverty Law Center classifies hate groups as active if they’ve done activities such as spreading fliers, holding meetings, burning crosses or putting out a newsletter in the calendar year.

The center’s findings echo those of a report put out by the Anti-Defamation League in 2016 about the Klan. The report, called “Tattered Robes,” pointed out that, even in contrast with the rest of the far-right hate movement, Klan groups are marked by an especially high level of instability:

More than half of the currently active Klan groups were formed only in the last five years. This is not, as it may first seem, a sign of growth, but rather illustrates how short-lived today’s Ku Klux Klan groups actually tend to be. …

While a few longstanding Klan groups still exist, they continue to fade away. Just a decade ago, Klan groups such as the White Camelia Knights, the Mississippi White Knights, and the Church of the National Knights exhibited consistent activity. Today, all three are mere shadows of their former selves.

Even so, at least one Klan leader insists his group’s fortunes are on the rise. Last year, Chris Barker, an imperial wizard of the Loyal White Knights of the KKK, told the Independent that the election of President Donald Trump has done wonders for his recruiting.

“I’ve been doing this for over 20 years, and I haven’t seen the Klan grow at the pace it’s growing now,” Barker said. “I mean, it’s even hard to keep track of the numbers you’ve got ’cause there’s so many coming in.”

However, as we cautioned last week, it’s important to treat anything said by a hate group leader, especially with regard to things such as membership numbers, with a degree of skepticism.

Brice Current, internal affairs captain for the San Juan County Sheriff’s Office, the agency overseeing the investigation, called the report an attempt to politicize the shootings.

“I don’t think this has anything to do with a political agenda,” Current told The Associated Press.

But as the Daily Beast reported earlier, there’s plenty of evidence linking Atchison with the movement. He spent a lot of time on white supremacy websites, posting racist comments and memes.

More evidence that Atchison was driven by hate emerged this week. His autopsy report noted that he had faint ink markings on his left leg, including a swastika and the letters “SS,” an abbreviation for an elite Nazi military unit. Atchison also had “build wall” written on his leg, an apparent reference to Trump’s campaign promise to build a border wall between Mexico and the United States.

Both of Atchison’s victims were Latino.

Hate crime roundup: From dumb kids to baseball bats and life in prison

‘This movie isn’t for you’

Most fans are similarly effusive, but alt-right trolls have attempted to sabotage the film by circulating hoaxes about black people assaulting whites during screenings. The goal, of course, is to convert an event that’s all about celebrating black achievement into something reinforcing the racist stereotype of omnipresent black violence.

However, as The Daily Dot reports, some internet jokesters have turned this racist fake news into a pretty solid meme mocking the obviously false stories by folding it into increasingly ridiculous scenarios:

I tried to see Black Panther but I was accosted by a gang of black youths, they said “this movie isn’t for you, whitey!” then pinned me down and carved “Go see Peter Rabbit instead” into my forehead. – @pixelatedboat

I want to see Black Panther but when I tried a gang of black youths said “this movie isn’t for you” before rolling me up into a ball shape and dunking me through a nearby basketball hoop. – @Mr_Finn_McCool

I tried to see Black Panther but a teenager shouted “this movie’s not for you” and then a graffiti artist tagged me, then another guy covered me in clay and sold me at an art auction? I fetched $1700. – @MKupperman

The Hate Report: The KKK is packing up its hoods

By Aaron Sankin and Will Carless Reveal from The Center for Investigative Reporting February 23, 2018