The Hate Report: The last few weeks have been violent 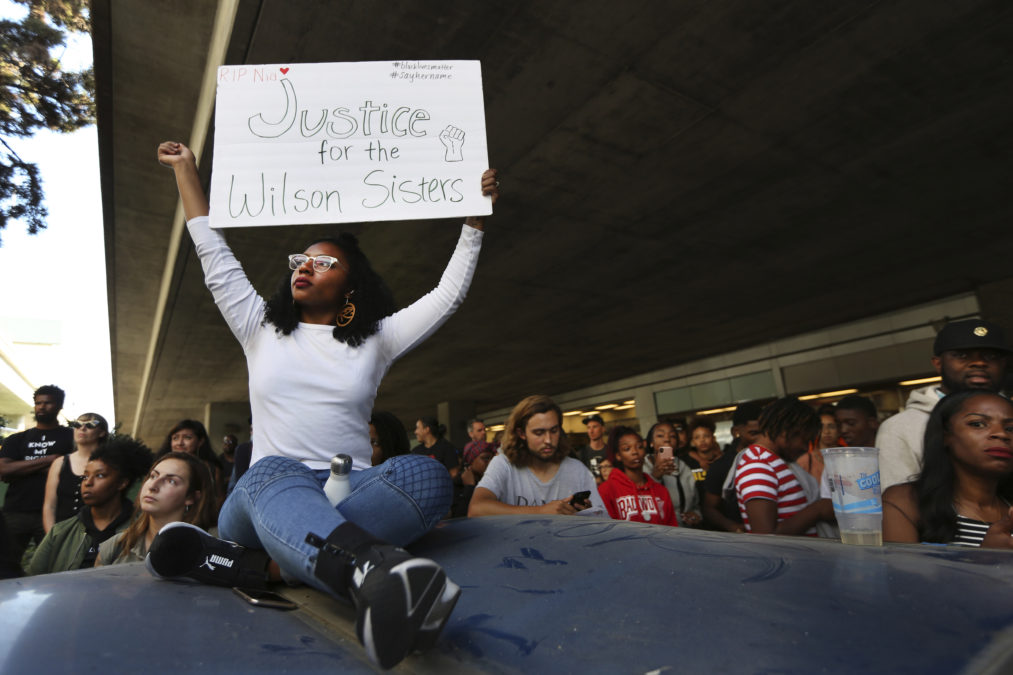 Jasmine Malone, 23, holds a sign at a vigil held for 18-year-old Nia Wilson, who was stabbed to death the night before at the MacArthur BART station in Oakland, Calif., Monday, July 23, 2018.(AP Photo/Lorin Eleni Gill)

In this week’s roundup: A deadly few weeks in hate, the many facets of a once-benign hand gesture, and Charlottesville 2.0.

In recent weeks, people have been injured and murdered in violent assaults that have been potentially linked to hate.

Here are some of the incidents we’ve been following:

We’ve also seen a slew of hate attacks that didn’t result in fatalities. Here’s some of what we’ve been tracking:

We never thought we’d ever write a sentence like, “The neo-Nazi ventriloquist is now banned from Starbucks,” but here we are.

When an OK is not OK

Four police officers from Jasper, Alabama, are under investigation for making the OK hand symbol in a photograph taken in front of a home where they had just made a drug bust.

Jasper Mayor David O’Mary told local news outlets that the officers had “used poor judgment.” The OK hand gesture has been co-opted as a symbol for white supremacy. In the topsy-turvy world of internet-generated memes, the symbol has also been used as a way of trolling “normies” (those not in on the joke) so that they are “triggered” (upset) by a gesture that is actually only being used for the purpose of upsetting them.

Let’s break down the four most common possible ways human beings might use the OK gesture in 2018:

Totally innocent: Long before the internet made everything worse, joining one’s index finger and thumb to form a circle simply meant OK as in, everything is all right. The symbol, and its associated emoji, is still used in this way every day across the globe.

The circle game: Apparently there is a popular kids’ game called “the circle game,” in which the goal is to make the OK gesture and trick someone into looking at it. In at least one version of the game, if you can trick someone into looking at the gesture, you get to punch them. You might find this clip from the TV show “Malcolm in the Middle” instructive here. Half of the Hate Report team (Will) had never heard of this, but the other half (Aaron) has been playing this game with his younger brother for decades.

Actual white power: In the wake of the deadly Unite the Right rally in Charlottesville last year, we reported on a trove of online messages leaked from the gaming and social media platform Discord, which Unite the Right organizers used to rally their troops for the Charlottesville event. Those messages included numerous examples of rally participants posting photos of themselves flashing the OK gesture: Trolling: As BuzzFeed helpfully explained last April, the idea of using the OK sign as a means to “trigger normies” can be traced back to the online message board 4Chan in early 2017.

A post on 4chan’s /pol/ board from Feb. 28, 2017, titled “Operation O-KKK has gained quite a bit of progress” states: “To any who haven’t seen the original thread, our goal is to convince people on twitter that the ‘ok’ hand sign has been co-opted by neo-nazis.”

That plan seems to have worked pretty well.

The whole hoax/double-hoax came to a head when commentator and troll Cassandra Fairbanks sued journalist Emma Roller for defamation for claiming in a tweet that Fairbanks had flashed a “white power hand gesture” alongside Mike Cernovich at the White House. That lawsuit was thrown out in June when a judge found Fairbanks had been unable to prove “actual malice” in Roller’s tweet.

In a Twitter message, Fairbanks said she didn’t know about the 4Chan meme when she made the gesture: “Mike and I were trolling in the ‘we support trump and are here’ way … not the white power way. It’s absurd,” she wrote.

So all this begs the question: Were the cops in Alabama playing a childhood game? Or were they trolling? Or are they racists who hoped nobody would notice their hateful gesture?

The simple answer is that, absent further information, we don’t know.

It’s certainly relevant that the officers in question are still being questioned about the incident. It’s also notable that they made the gesture while in a large group of white men (including Mayor O’Mary) outside the home of a suspected African American drug dealer.

However, Ed Howell, the local journalist at the Daily Mountain Eagle newspaper who took the photo, told us he’s not convinced there was anything racist about what the officers did.

“I watched them for several minutes, and I saw nothing unusual in terms of statements or actions that would indicate racial hatred or bias,” Howell said. Howell confirmed that the officers in question are currently being questioned and could still be disciplined.

“These racist groups are running around, and we need to be vigilant here in Alabama,” he said.

Charlottesville 2.0 is not happening

Jason Kessler, the man who organized last year’s deadly rally in Charlottesville, has given up his plans for an anniversary event later this year in the Virginia city.

Kessler, who was denied the permit, sued the city in an attempt to force the event through. But this week, Kessler abruptly withdrew his application at a court hearing that USA Today described as “bizarre.”

The Hate Report: The last few weeks have been violent

By Will Carless and Aaron Sankin Reveal from The Center for Investigative Reporting July 27, 2018