The Hate Report: What white nationalists think about Tucker Carlson 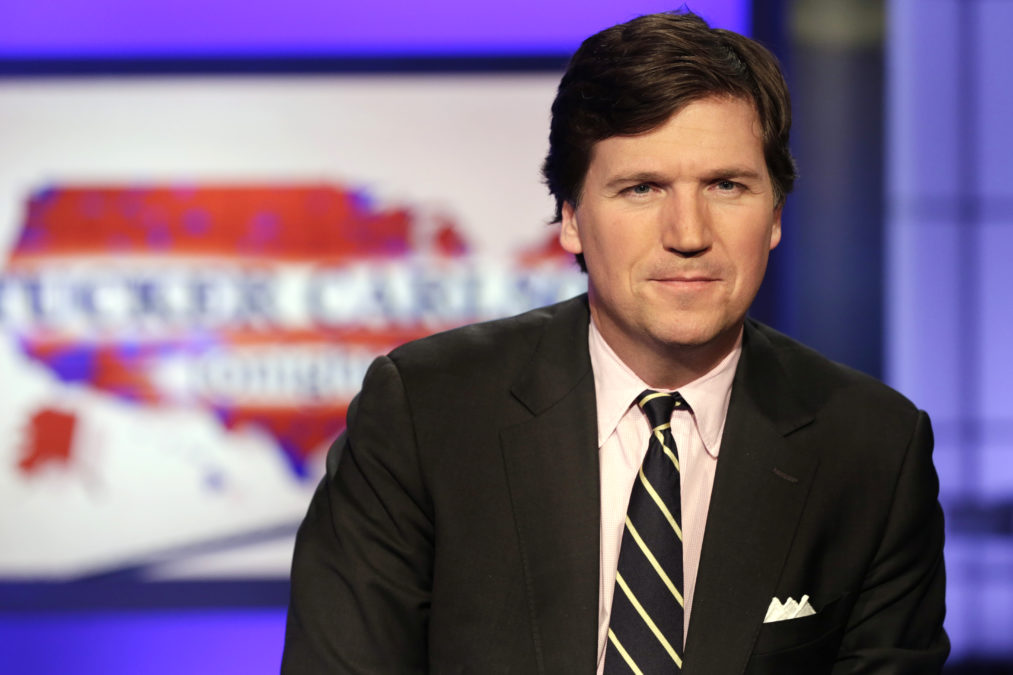 In this week’s roundup: We researched the darkest corners of the internet to gauge support for Fox News pundit, and the perpetrator of the Charlottesville attack goes on trial.

He has used his nightly show to question whether racial diversity is truly a positive thing in America. He has promoted, and defended, the phrase “It’s OK to be white,” which has become a slogan for racists across the country. David Duke, former grand wizard of the Ku Klux Klan, claimed last year the campaign was “sweeping the nation.”

Just last month Carlson suggested that a Georgetown professor was calling for “genocide” of white people. This is a warning that has been circulating in white supremacist circles for decades. And he has used his perch to play down the issue of white nationalism in America: “It’s not a crisis. It’s not even a meaningful category,” he said on his show earlier this year.

One of the stated goals of leading white nationalists has been to mainstream their racist ideals into the modern conservative movement. With that in mind, we were curious to see whether the hardcore white nationalists on the web viewed Carlson as their messenger to the broader public.

We asked our Hate Sleuths, a group of loyal Hate Report readers who volunteer their time to help research, to comb through sites that often host hate speech for mentions of the conservative commentator.

They found overwhelming support for Carlson. Everywhere they looked, the Fox News anchor was being discussed, and ideas were being swapped about how to convince him to continue mainstreaming racist and anti-Semitic talking points.

On every forum, the sleuths found dozens of mentions of Carlson. They reported that these were overwhelmingly positive.

“Tucker is a national treasure and will be the catalyst for real social change,” gushed one poster on /pol/.

“At best, he’s a gateway for us and they know it,” wrote a user on Gab.

Another anonymous poster on /pol/ went further: “Tucker is Hitler 2.0.”

Perhaps the most ringing endorsement for Carlson came from Daily Stormer publisher Andrew Anglin, who raved about the anchor’s ability to “own” liberal guests on his show. Anglin and his cadre of writers evolved their stance from skeptical encouragement to hero-worship of Carlson, with The Daily Stormer ultimately labeling Tucker “/ourguy/.”

In November 2016, for example, Anglin used a homophobic slur to describe how he used to feel about Carlson. “Oh but now – this man is a machine of ultimate destruction,” he wrote.

Later, they went on to champion Carlson. We’ve decided not to publish many of the headlines, because they are violent and obscene. But here are a couple of the more tame ones:

“Tucker SKINS Anti-White Professor ALIVE and MAKES A COAT OUT OF HIM.”

(Last week BuzzFeed News published a story stating that Carlson had been mentioned in 265 articles on The Daily Stormer between November 2016 and November 2018.)

In an interview, Carlson called our story “embarrassing and stupid.”

Carlson repeatedly asked me (Will Carless) what my name was and lambasted me for calling myself a journalist. He claimed Reveal was only interested in writing a hit piece that was “guilt by association.”

You can listen to that interview below.

Asked whether he considers himself to be aiding and abetting white supremacists by mainstreaming their ideas, Carlson dodged the question.

“I don’t even know what you’re …” Carlson said, before going on. “I speak for myself. My views are transparent. If you have a question about what I mean, you can ask me.”

So, I asked him a direct question: Why he chose to focus on a small local news story in his segment about the “It’s OK to be white” slogan. Again, he dodged, referring to what he had said on the show: “I think I explained it pretty well.”

These sites weren’t exclusively a lovefest for Carlson, however.

The Hate Sleuths found plenty of criticism of the anchor, varying from concern that he works for “Fox Jews,” to his privileged upbringing, as outlined in this post on /pol/:

“Frankly, it’s flat out hilarious that he, of all the filthy rich coastal media elites on tv, accuses anyone of upper class elitism. He is the son of a US Ambassador and heir to the Swanson Food fortune … He just knows how to stir up anger and resentment in you ‘flyover folk’ gullible maga losers because he looks down his nose at you all more than anyone else.”

The overall sentiment, however, was one of comradeship.

The view that Carlson is an ally to the hate movement is so entrenched among some of the extremists on these sites that they have begun to overtly court his attention. There’s Anglin’s latest piece about the Fox News anchor, “Tucker Predicts Race War”:

This week Tucker took note of the highly racialized, anti-white commentary surrounding the Kavanaugh hearings– in which all participants are white.

And then he says a race war might be coming soon.

Anglin continues with a direct plea to Carlson, responding to the anchor’s televised statement that “we really don’t want” a racial conflict in the United States:

Maybe you don’t want it Tucker, but you should. The extermination of the lesser races is the only way to secure an existence for your people and a future for your children’s children.

If you’re interested in helping us investigate the world of hate, sign up for the Hate Sleuths here.

Courtroom proceedings began last week in the murder trial of James Fields, a white supremacist who drove his car into a crowd of protesters during the 2017 Unite The Right rally in Charlottesville, Virginia.

The AP reports that Fields’ lawyer, John Hill, indicated his client, who has pleaded not guilty, will argue he was acting in self-defense when he sped through the demonstration, killing activist Heather Heyer and injuring 19 more. There is no dispute over whether Fields was driving the car. Fields holds that he did not intend to harm people when he drove through the crowd and, instead, was merely trying to get out of a frightening situation.

Prosecutors presented evidence that, in the months before the event, Fields made a pair of social media posts that approvingly depicted a car driving through a crowd of people labeled as “protesters.”

Fields is charged with first-degree murder for Heyer’s death, along with nine other counts of malicious wounding, aggravated malicious wounding, and failing to stop at an accident resulting in a death. He is also one of 30 people participating in the march who have been indicted on federal hate crime charges.

The 21-year-old Ohio resident’s high school teacher and some of his former classmates told CNN that he was “very big into Nazism” and had a “fondness for Adolf Hitler.”

During the rally, Fields was photographed carrying a shield emblazoned with the logo of Vanguard America, a white supremacist group. However, in a statement on social media, the group distanced itself from Fields, insisting he was “in no way, a member.”

Like many alleged perpetrators of mass violence, Fields has a history of domestic abuse. He had previously been accused of assaulting his wheelchair-bound mother and threatening her with a knife.

Many of the communications between Fields and his mother have come out during the trial. In the days leading up to his trip to Charlottesville, text message records show Fields’ mother urging her son to be careful at the rally. Fields replied, “We’re not the one who need [sic] to be careful.” He then sent his mother a picture of Hitler.

Jurors in the trial listened to a recording of Fields talking to his mother over the phone shortly after his arrest. As WHSV reports, Fields told his mother that he was “mobbed by a violent group of terrorists … (who) were waving the ISIS flag.”

“Everybody supports something,” replied Fields’ mother. “I don’t see one better than the other.”

There is no evidence any of the counterprotesters in Charlottesville were displaying pro-ISIS materials or supporting the agenda of the Islamist group.

In the midst of the jury selection process, residents in Charlottesville, where the trial is being held, reported receiving robocalls from the Idaho-based white supremacist group Road to Power pushing the narrative that local city officials were to blame for Heyer’s death.

If convicted on the first-degree murder charge, Fields could face life in prison. “I want him to spend the rest of his life in prison, so that he can’t hurt anyone else ever again,” said Star Peterson, an activist who suffered two broken legs and a broken back as a result of Fields’ actions.

The Hate Report: What white nationalists think about Tucker Carlson

By Will Carless and Aaron Sankin Reveal from The Center for Investigative Reporting December 7, 2018