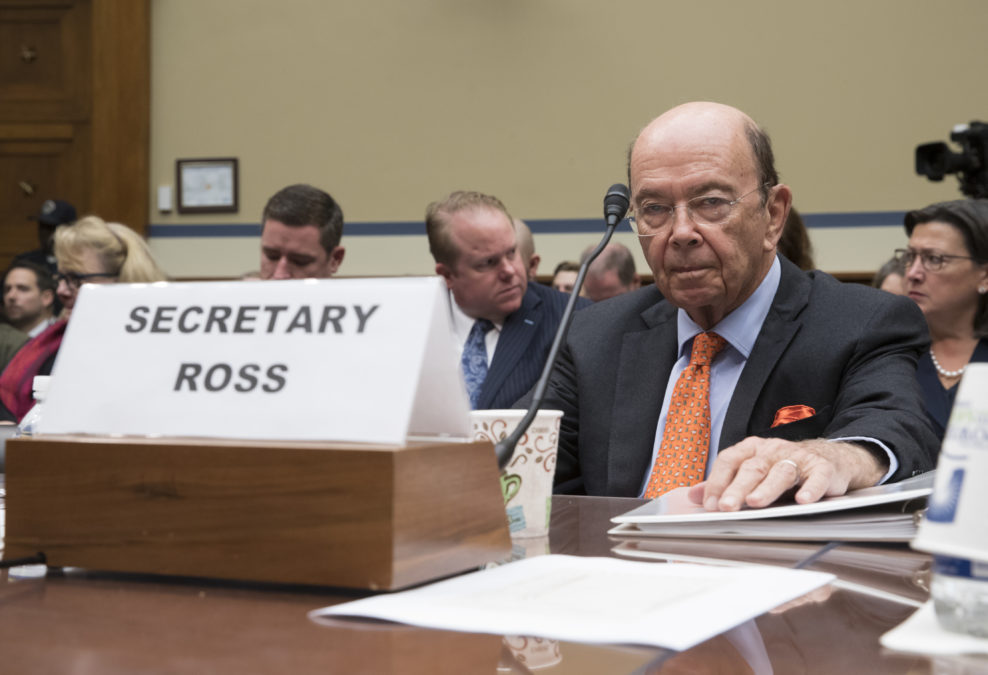 Commerce Secretary Wilbur Ross appears before the House Committee on Oversight and Government Reform to discuss preparing for the 2020 Census.

This week, the Trump administration announced it plans to include a question about people’s citizenship status in the upcoming 2020 Census.

White nationalists, for the most part, loved the move.

On the neo-Nazi website the Daily Stormer, Andrew Anglin highlighted Fox News talking head Tucker Carlson’s support of the citizenship question. “They thought they could get out of taking the census…? They were wrong,” Anglin wrote, adding one of his characteristic calls for racial violence: “This is going to be like another Crusade. Only way, way more bloody.”

On 4chan’s white nationalist-leaning /pol/ message board, users were largely in favor of the citizenship question, with some arguing it could be used as a political cudgel to batter their non-white enemies:

We must convince the illegals Not (sic) to participate in the “white man’s census” at all costs. This will cost CA money and possibly even a Congressional representative. We will meme ICE raids following census visits. We will even take census jobs and report illegals.

Not everyone on 4chan was in favor of the Census deliberately excluding undocumented immigrants.

The census is supposed to be for total population, citizen or not, because things like how many people use the roads and shit like that needs to be properly calculated, and just because someone isn’t a citizen doesn’t mean they aren’t using local resources and the like.

Good point, anonymous 4chan poster. The federal government uses census data to make a host of important decisions – from drawing congressional borders to distributing billions of dollars for services, such as the early childhood education and nutrition program Head Start.

The Council on American-Islamic Relations, a Muslim advocacy group that frequently spars with the White House, called the move “part of the Trump administration’s white supremacist agenda.”

Commerce Secretary Wilbur Ross insisted the question is important in helping the Justice Department enforce the Voting Rights Act. In some ways, the debate mirrored the battles over voting rights.

Conservative advocates of the plan, such as Kansas Secretary of State Kris Kobach, say the question allows the government to prioritize the interests of U.S. citizens over those of undocumented immigrants.

Over at Mother Jones, Ari Berman – likely the nation’s foremost chronicler of contemporary voting rights battles – recently published a deep dive into the subject. He wrote:

Civil rights groups say the move will cause immigrants, particularly undocumented ones, to avoid responding to the census for fear of being reported to immigration authorities. The result will be a massive undercount of the Latino population, leading to reduced political power and federal resources for places like Fresno (California).

Put simply, that means members of international terrorist groups such as ISIS or al-Qaida can be charged with terrorism, but mass killers like Dylann Roof, who associate with groups like neo-Nazis, don’t face terrorism charges.

Rep. Michael McCaul, R-Austin, who chairs the House Homeland Security Committee, said the Austin bombings – believed to have been carried out by a young, white, Christian man – highlight the need for new federal charges to be added to the books.

Similar calls were made by lawmakers in the wake of the Las Vegas shooting last year.

Meanwhile, commentator David Perry argued in Pacific Standard that these white suspects aren’t the “lone wolves” they’re often made out to be. He argues that they act as a pack and therefore should be defined by what they are: terrorists.

When we think of terrorism, we look for secret leaders sending out commands and planning operations. That’s just not the model in this case, so when these white men kill, the media, elected officials, and law enforcement respond by disavowing connections to terrorism. These disavowals reveal a basic racism surrounding the word “terrorism,” although many officials and reporters just want to keep people from panicking.

Remember the crazy story a couple months ago about the town manager in Maine who also was a (not so) secret neo-Nazi?

Tom Kawczynski lost his job very quickly, and we thought that was the end of his 15 minutes of fame. But then local writer Crash Barry decided to follow up on Kawczynski’s fortunes. Barry, who helped break the story, kept tabs on Kawczynski, posing as a white nationalist fanboy online and crashing an event at a local Thai restaurant in disguise.

Barry’s account of stalking Kawczynski is a classic example of Gonzo journalism. Take this nugget, for example:

On the morning of Friday, January 19, I smoked a huge joint and drank two cups of tea, then sat down at my computer and commenced what I call deep Googling.

But the story has a serious point. Barry wanted to find out more about Kawczynski’s plans to establish a whites-only ethnostate in rural Maine called New Albion. After a few weeks of investigation, however, Barry concluded his prey was too pathetic to bother much more with.

I’m no longer overly concerned about Kawczynski’s plans for New Albion. It’s clear he’s not much of a leader. Possessing the charisma of a turnip, he failed to inspire anyone when he got his moment in the alt-right sun.

And, according to Barry’s Twitter, Kawczynski recently gave up on the project.

How to save a life

In 1996, Keisha Thomas was protesting an Ann Arbor, Michigan, neo-Nazi rally when a man sporting a Confederate flag tank top and SS tattoo was spotted among the protesters, the crowd descended with a savage beating. Thomas, then 18, threw herself on top of the man, shielding him from the blows.

A picture of Thomas, who is black, defending the man quickly went viral. Well, the 1996 equivalent of viral. Thomas emerged from the scrum as a vital spokeswoman for tolerance. Although, as Thomas told Oprah Winfrey years later, no good deed goes unpunished. “I got a lot of hate mail. A lot of people, still to this day, hate me. I get death threats,” she said.

But it also reminded us of how Al Letson protected an alt-right vlogger at a contentious Bay Area rally last year. We turned the incident into the anchor of a podcast about the wave of violence that’s surrounded clashes between the far right and antifa across the country.

You can listen to that podcast episode here.

By Aaron Sankin and Will Carless Reveal from The Center for Investigative Reporting March 30, 2018