Trump donors and appointees poised to profit off science agencies 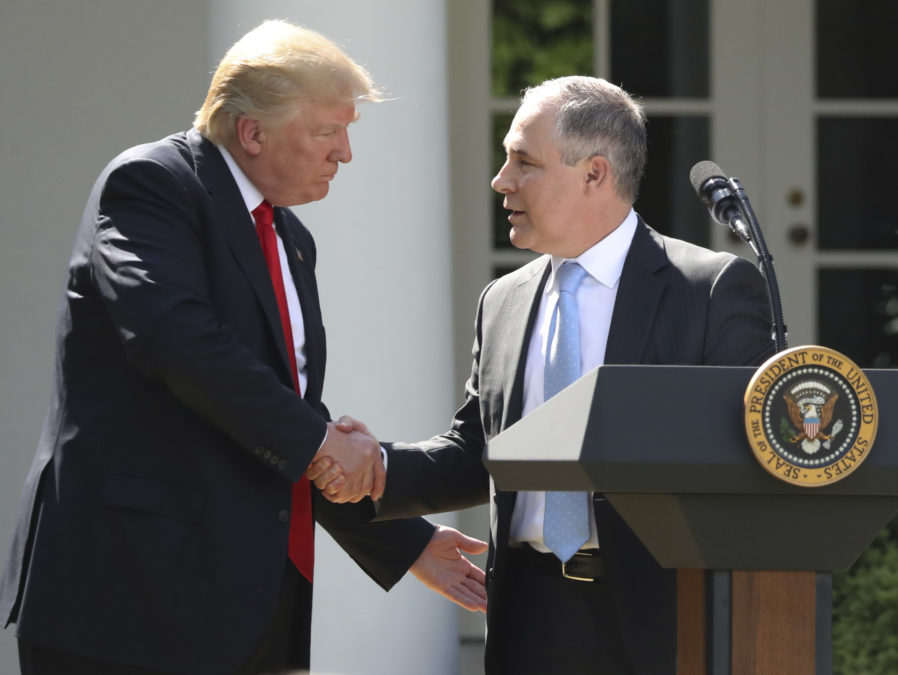 President Donald Trump shakes hands with EPA Administrator Scott Pruitt after speaking about the U.S. role in the Paris climate change accord in the White House's Rose Garden.

The week’s Trump-related conflicts flared in government science agencies: The EPA delivers good news to a major donor, a privatizing weatherman takes over NOAA, and an appointee could profit from the oil spills she’s supposed to prevent.

When Environmental Protection Agency Administrator Scott Pruitt declared earlier this week that “the war against coal is over,” it was cheery news for some of President Donald Trump’s most generous financial supporters.

The nation’s coal mining interests – from CEOs and corporate attorneys to ordinary miners in small towns in West Virginia and Kentucky – together pumped more than $6 million into Trump’s campaign last year, according to an analysis of the president’s top donors by Reveal from The Center for Investigative Reporting.

That’s more money than Trump raised from tech companies, the auto industry or health care concerns (though not as much as he received from pro sports).

The U.S. coal industry has been in decline for a decade, most recently because of hydraulic fracturing, or fracking, which has flooded the energy market with cheap natural gas and oil. But coal executives and industry boosters prefer to blame their plight on environmental regulations, especially carbon dioxide emissions rules prompted by fears of global warming.

Trump’s promises to revive the coal industry and his denial of climate change – he once tweeted that global warming is a hoax created by China – won him huge support in coal country.

Another big haul came from donors associated with billionaire Chris Cline, who built his fortune by acquiring huge coal reserves in Illinois in the 1990s. Cline, who gave Jeb Bush $1 million early on, wound up donating $1.4 million to Trump.

Donors with ties to the nation’s biggest coal company, Murray Energy Corp. of Ohio, gave more than $660,000, including $300,000 for Trump’s inauguration. Like Trump, Murray Energy CEO Robert Murray long has been a shoot-from-the-lip skeptic of climate change.

In testimony at a 2007 Senate hearing, Murray dismissed global warming as “global goofiness” and derided proposals to restrict the burning of coal as an “economic suicide note” for the nation’s coal miners. The day after President Barack Obama was re-elected in 2012, Murray publicly prayed for divine forgiveness, then ordered the layoffs of more than 150 miners, blaming Obama.

Among the Murray Energy donors were 50 miners and other company employees who wrote checks for $150 or less, Federal Election Commission records show.

Trump also has tapped a former mining executive whose company had a history of safety violations to lead the federal Mine Safety and Health Administration. David Zatezalo was the former CEO of Rhino Resources, which operates coal mines in Appalachia. The Senate is set to vote on his confirmation next week.

New NOAA head previously tried to profit off it

Trump has nominated AccuWeather CEO Barry Myers to lead the National Oceanic and Atmospheric Administration. Myers has a history of lobbying to conceal government weather information so his company could resell it, reports Eos Earth & Space Science News.

In 2005, Myers backed legislation to prohibit the National Weather Service from letting the public see taxpayer-funded weather information that “could be provided by a private sector weather service company.” Groups representing workers and scientists said the failed legislation would have provided exclusive access to AccuWeather, which sells the information.

“He would be in a position to fundamentally alter the nature of weather services that NOAA provides the nation, to the benefit of his family-owned business,” an attorney for the union representing National Weather Service employees told Eos.

Added an official with the Union of Concerned Scientists: “He has advocated on behalf of his private company to take over some NOAA services. He is not really qualified, as he is not a scientist and has no experience with much of what NOAA does.”

A conflict with oil spills

A similar situation exists at the agency assigned to prevent pipeline oil spills, which now has a top official who stands to benefit financially when oil is spilled.

Drue Pearce, the new acting administrator of the Pipeline and Hazardous Materials Safety Administration, and her husband have owned a company touted as “the Arctic’s preferred partner for environmental compliance products & Oil Spill Response,” according to commercial records dug up by DeSmog, a blog covering issues related to global warming.

Pearce also set up a company for the “sale of environmental response equipment,” the blog reported.

The agency has been criticized for inadequate inspection and regulation preceding oil spills that cost hundreds of millions of dollars to clean up. Pearce would stand to profit if the agency allowed oil spills to happen on her watch.

“It’s important and disturbing to learn that a senior Trump administration official has a significant financial interest in oil spills. The fact that it’s an appointee’s spouse who owns a company, rather than the appointee, does not shield them from conflicts of interest scrutiny in either common sense or the law,” Jeff Hauser, executive director of the Revolving Door Project at The Center for Economic and Policy Research, told DeSmog.

An agency spokesman responded to a DeSmog query by saying Pearce would recuse herself from decisions in which she could enrich herself.

Trump gives job to another lobbyist

The Trump administration has hired another former lobbyist to a key post, this time at the Department of Health and Human Services, reports the blog Health Care Renewal.

The agency’s new acting secretary, Eric Hargan, previously worked at Greenberg Traurig, which counts Novartis and the American Hospital Association among its clients.

The Center for Responsive Politics reports Hargan switching from posts in a lobbying firm to government, back to lobbying and now back to government. He has billed $2.8 million in fees from pharmaceutical, health product, and hospital and nursing home firms, the center reports.

Corrections: A previous version of this story misstated the position to Eric Hargan has most recently been appointed. He was named acting secretary of the Department of Health and Human Services. A previous version of the story also misstated the name of the firm at which Hargan worked, because it was reported incorrectly by Health Care Renewal. The firm is Greenberg Traurig.

Trump donors and appointees poised to profit off science agencies

By Lance Williams and Matt Smith Reveal from The Center for Investigative Reporting October 14, 2017