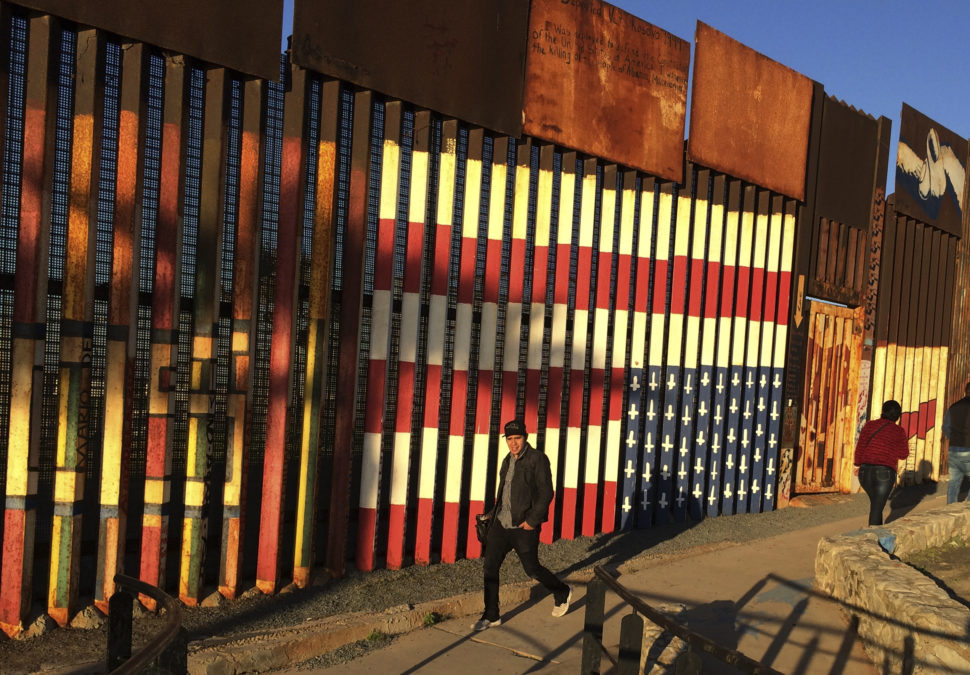 People pass graffiti along the border structure in Tijuana, Mexico.

The U.S. Department of Homeland Security on Tuesday published twin guidelines on how to implement President Donald Trump’s executive orders on immigration and border security, signaling a broad shift in U.S. policy and paving the way to deport potentially millions of immigrants, some of them merely suspected of crimes.

The memos, signed on Monday by Homeland Security Secretary John Kelly and issued to select agency heads, call for the immediate hiring of 10,000 immigration agents and officers and 5,000 Border Patrol agents, and extending powers now limited to border regions to the rest of the country. They also seek to add immigration lockups and prepare budget requests for the construction of a border wall – all things that Trump has already pledged to do.

“I determine that the faithful execution of our immigration laws is best achieved by using all these statutory authorities to the greatest extent practicable,” Kelly wrote. “Accordingly, Department personnel shall make full use of these authorities.”

In issuing the guidance, the Trump administration returns to controversial policies and programs launched or pushed by President George W. Bush and later rolled back by President Barack Obama. The memos amount to a wish list come true for immigration restrictionists and border hawks. Immigration advocates, meanwhile, blasted the administration, calling the memos and executive orders dangerous.

Jessica Vaughan, director of policy studies at the Center for Immigration Studies, a think tank that supports tighter immigration controls, said the Trump administration’s plan is “huge” and will correct what she called Obama’s “neglect of immigration enforcement.”

“It’s going to restore serious immigration enforcement, and that’s what Congress intended when it wrote immigration laws and what the public expects and what the country needs right now,” Vaughan said. “Illegal immigration didn’t happen overnight and it’s not going to be solved overnight.”

No longer will unauthorized immigrants convicted of serious crimes be the main targets for deportation from the country, as was the policy under Obama. Instead, the sweeping guidance from Kelly instructs the department to broaden its focus to include undocumented immigrants convicted of crimes, facing charges, suspected of having committed crimes or who, in the judgment of an immigration officer, pose a threat to national security or public safety.

Marielena Hincapié, executive director of the National Immigration Law Center, said that the policies outlined in the memos were even more extreme than Trump’s campaign rhetoric. She called them a “mass deportation blueprint” breathtaking in scope that would wreak havoc.

“These memos along with the executive orders throw the rule of law out the window. Everyone becomes a priority” for deportation, she said. “These are dangerous xenophobic ideas that have long been in the extreme wings of the Republican Party.”

In what would be one of the Trump administration’s most significant changes to immigration policy, the memo calls for a major expansion of an enforcement tool known as expedited removal. That part of immigration law allows officials to remove someone from the country without a hearing before a judge.

In the past, immigration and border officials used expedited removal against people who had entered the country within two weeks and were found within 100 miles of the border. The memo extends the timeframe to two years, and it does not impose a limit to where officials can apply it. It says further guidance will be published.

Previous versions and details of the signed memos have been leaked, including drafts dated Feb. 17. One change in Kelly’s Presidents’ Day memos is latitude for the acting heads of Customs and Border Protection, Immigration and Customs Enforcement and U.S. Citizenship and Immigration Services in how to instruct their agents and officers and shift resources to target specific groups, such as convicted felons or those involved in gang activity or drug trafficking.

Kelly also directed Customs and Border Protection to develop plans to design, construct and maintain a border wall, including budget requests to Congress to build it and pay for its upkeep. Following up on a request by Trump, who has repeatedly said he plans to make Mexico pay for the wall, Kelly directed them to tally up the amount of department funding and aid to Mexico. He also ordered a comprehensive study of border security.

The agency has said it will build a wall near El Paso, Tucson and El Centro, California, places where current fencing is no longer effective, according to the Department of Homeland Security. The Border Patrol is also assessing where a wall or other barrier could be built where no fencing exists.

The U.S. has been overwhelmed in recent years by a rush of people, including large numbers of children arriving without adults, particularly in the Rio Grande Valley in South Texas. According to the border security memo, about 155,000 minors, mostly from Guatemala, Honduras and El Salvador, have been apprehended along the southern border with Mexico over the last three years.

The memo sets aside a decision – for now – about Obama White House policies that directed immigration officials to exercise discretion with two groups of undocumented immigrants: children arriving by themselves and adults who came to the United States as children. But the Trump administration may go after their parents and family members who helped bring them here.

About 60 percent of those deemed unaccompanied minors are ultimately reunited with one or both parents whom Kelly said are living in the country illegally. Many who are released ultimately fail to return to court.  Under the new guidance, people who directly or indirectly aid in the smuggling or trafficking of children could face deportation or criminal prosecution. Immigration advocates interpret that to extend to the families of the children.

Between 2013 and 2015, the agency’s patrol zone in the Rio Grande accounted for 40 percent of all apprehensions, but 9 percent of its funding for fencing and other “tactical infrastructure” to that area, according to a recent Government Accountability Office report. But building a fence in that region faces a raft of challenges, including private property ownership, a water treaty and international boundary with Mexico and the meandering Rio Grande itself.

That surge along the southern Texas border has contributed to an overwhelmed U.S. immigration court system. Run by the Justice Department, the immigration courts now face a record-high backlog of 534,000 cases.

Kelly mandated the department develop a plan with the Department of Justice on how to send more immigration judges and asylum officers to the border to conduct hearings and interviews. For migrants who sneak into the U.S. through Mexico, the department also plans to push them back to be held in the country they arrived from — even if it’s not their home — where they can wait for a U.S. immigration judge to decide their fate. That could essentially export the issue of immigration detention.

At the same time, Kelly called for more immigration detention space and the end of the so-called catch-and-release policy, which allowed some immigrants and asylees to avoid detention if they promised to appear in immigration court.

The Trump administration has moved to deputize more police departments around the country to enforce immigration laws while restoring a program that harnesses arrest records to identify immigrants who may be deportable.

Some police departments have balked at one program, known as 287(g) in reference to a section of federal immigration law that allows it, because law enforcement officials say it undermines public safety and encourages racial profiling. Officials say the program erodes trust in law enforcement, causing victims of crime who are undocumented to be less cooperative with police. There are 32 agencies in 16 states that now participate in the 287(g) program.

The memo also resurrects another controversial program known as Secure Communities. Launched under Bush and expanded by the Obama administration before it shifted its attention to serious criminal offenders, Secure Communities aims to link arrest records with immigration files to aid in locating deportable offenders. Civil rights advocates and pro-immigrant groups assailed the program as a dragnet that captured people who weren’t serious public safety risks.

The memo also creates a new office within Immigration and Customs Enforcement to assist victims of crime. The establishment of the office for Victims of Immigration Crime Engagement, or VOICE, also redirects any resources used to advocate for undocumented immigrants while restricting privacy rights and protections to only U.S. citizens and legal residents.

“Criminal aliens routinely victimize Americans and other legal residents,” the memo states, providing no statistics as proof. “Often, these victims are not provided adequate information about the offender, the offender’s immigration status, or any enforcement action taken by ICE against the offender.”

By Andrew Becker Reveal from The Center for Investigative Reporting February 21, 2017